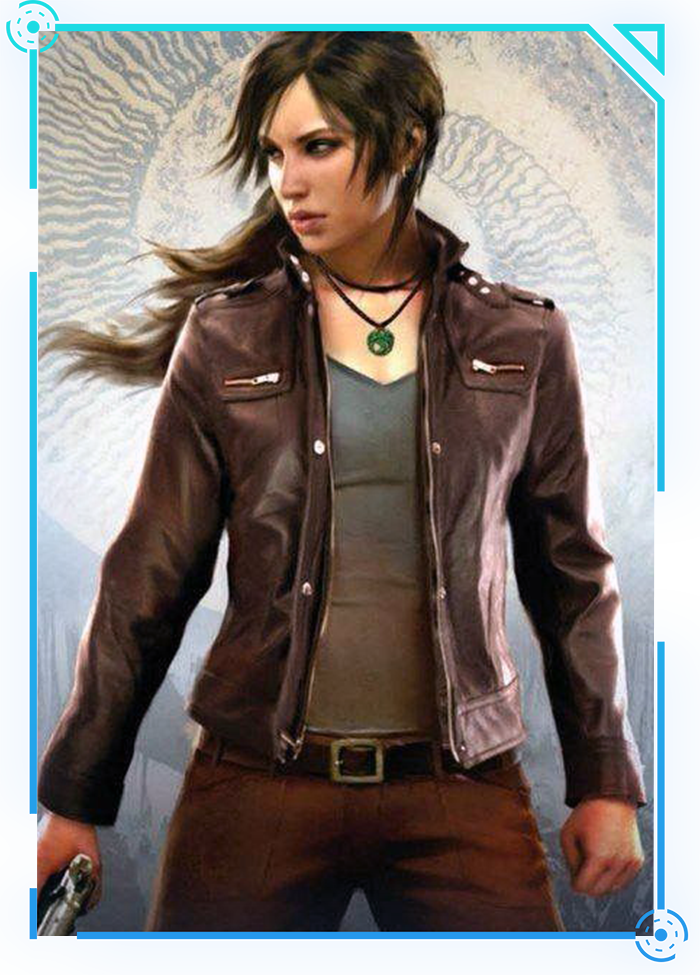 The Spark that Started it All


Allyson had a typical usual family on Corellia. Her parents worked on the yards, and her father especially loved ships. Growing up, she would linger around the yards watching as the ships were developed and built. Her father was the first to notice her knack for tech when she took apart one of the small worker droids that her father had around the house. She broke the droid down and quickly improved it to make it faster. Mr. Locke continued to bring work for his daughter and began pushing her towards their dream career for her, seeing the potential in her. Allyson, on the other hand, felt she was meant for something else. ​
​
She did as she was told and was on her way to being an engineer, her parents putting her quickly into a private academy for the gifted. During class, she would look out at the window watching as the ports came to life with ships taking off and entering port. Feeling that school was a waste of time, she ran away from home and snuck on board one of the leaving freighters. There she found herself fascinated with the ship tinkering until she was found by the ship's captain. Seeing that she was so young and full of dreams, Ember Rekali decided to keep her aboard. Also, she proved to be useful for someone so young. ​
​
Spending time with Ember allowed her to fully accept the whole thing called the Force. She felt it and realized the voices she heard around machines wasn't just her going insane - it was the machines themselves speaking to her. Doing a little research, she discovered her connection and sort to speak manifestation of the Force. The girl only could touch mechu-deru, beyond that any force potential was on accident and tended to be power "sneezes" with the Force. Beyond that, Allyson could only do mechu-deru with control.​
​
The devastation of Corellia left her an orphan and without a family. She clung tightly to Ember, who had his own issues with his own living family. Separating, he gave Allyson a ship, and she continued to discover who she was and what it was to carry on the Corellian heritage. Wearing the second class Corellian Bloodstripe, she earned by helping survivors relocate, Allyson continues to venture forward learning and accepting the life that was given to her.​
PREVIOUS TIMELINE:
Last edited: Jun 3, 2020

Thread Tracker​
Chapter 1: Begin Again​
1. Angels belong in the Skies - Allyson gets a call from Loske causing her to return from the unknown regions.​
2. Going for the Head - Allyson receives the summons from the Jedi Order and joins Jyoti to discuss the Bryn'adul threat​
3. If Looks Could Kill - Loske confronts Allyson about Kaili & Allyson has to face one of her regrets.​
4. What Lurks Beneath - Allyson and Jyoti are at it again; Jedi Shadow time on a Bryn'adul planet.​
5. All that Remains - Doing the good humanitarian work, meets Amea. ​
6. Get Lucky - Allyson visits Coruscant Jedi temple, talks with Wyatt Morga about what was found on her recon mission.​
7. Incoming Storm - Aiding the Silver Jedi as one of its former shadows, fights Taeli Raaf with Wyatt Morga​
8. The Remedy - Allyson meets Maynard Treicolt, decides to join Saber Squad.​
9. Trouble on Tython - Loske gets a wedgie :3 ​
10. Bryning Down the House - Allyson sacrifices her fighter to help stop Tathra's powering up to hopefully stop him.​
11. Weight of the Worlds - Allyson nearly dies; meets Ryv Karis and forms a bond with him at her weakest.​
Chapter 2: Safe & Sound​
1. The Grandmaster's Lesson - Allyson feeling new strength as she heals wanders into a classroom on Coruscant.​
2. The More Things Change, The More They Stay the Same - Reminciing with John Locke ​
3. When Techies Meet! - Reconnecting with old Allies; Allyson teaches Kat Decoria Mechu Deru.​
4. Starbird - The need to explore what the kiss meant, Allyson meets with Ryv on Unity Day for the Alliance.​
5. idk my bff loske - Allyson lets Loske see another side of the Corellian.​
6. Not So Much Like Back Then - Hey there Lok​
7. Over the Muun and Far Away - Allyson and Ryv scout Muunilisnt.​
8. Crossroads - Allyson oversees Ryv's mission on Kuat; he continues to break down her barriers. ​
9. Mistwalker - Allyson and friends go to spooks town.​
10. The Chancellor is Not a Bad Man, Ob- - Allyson and Ryv visit the Chancellor. ​
11. Schism's Dawn - Allyson faces her boogie man and struggles between attachment and duty.​
12. Tales From the Front I: A Sudden Sunrise - Allyson returns to the front to find Ryv, reveals her struggle & helps him​
13. The Troska Treaty Affair - Continuing her lending her services to NIO, Allyson boards a pirate ship arrgggh!​
14. Kuat A Peculiar Situation - Allyson meets Bernard and works security with the investigator​
15. Preemptive Actions - With the threat of the ZU on Ilum, Allyson and Ryv decide they go undercover.​
16. Parol de Uhl Olys Lanlo - While preparing for infiltration to ZU, Auteme asks Allyson to learn Old Corellian​
17. Kyber Crisis - As her alter ego Adele Crawford, Allyson spies on the ZU.​
18. I Love U Metellos - Allyson reports her findings & freezes with her good friend Loske​
19. Bearing down on Botor - Allyson tries to fight on the front lines with Ryv & Maynard.​
20. The Coming Storm - Adventures on Byss reveal a Palpatine.​
Chapter 3: Innocent​
21. Invi(s)ncible - Allyson is assigned a Padawan, begins to revamp the Jedi Shadows​
22. Silver Sea Renegade - Travels with Ryv to Chandrila to meet with an old associate's friend​
23. Coruscanti Nights - Fundraising & Dancing ​
24. Blood Gulch - Distracted war games thanks to Ryv's gun show​
25. The Root of the Problem - Deep diving into a Sith Destroyer finding some funky things​
26. The Art of Dying - With her padawan in dire health, Allyson falls apart blaming herself.​
27. Repairs and Reinstruction - Weapons & Armors traded for Training to Taji.​
28. Lush Life - With the Chaos, Allyson seeks an escape.​
Chapter 4: Delicate ​
29. Internal Affairs - Allyson enters the TSE undercover, follows a curious Inquisitor.​
30. External Affairs - Taking the cover of Rae Cooke, Allyson depends on her Corellian charm a bit too much.​
31. Evening Birds - Rae meets a stray sithling who has a taste for something red.​
32. A Perfect Circle - As Jorryn's new assistant - Rae accompanies her Master to a meeting of all the Sith minds.​
33. On His Majesty's Inquisitors - Rae accompanies Jorryn to a quiet meeting of the intel branch, Taeli gives advice.​
34. Lost & Replaced - Fleeting feelings, arise during a simple shopping excursion.​
35. Reality - Allyson returns for a brief moment from Empire space, returns to Corellia with Ryv.​
36. The Lowe Family - Returning to Sith space, joins Jorryn to Moff Lowe's estate, feelings are realized, warnings given.​
37. Look what you made me do - Allyson sets to pass information to the GA, her feelings and true heart's desire comes out.​
38. I Had This Thing - Allyson finally says goodbye to Kaili Talith.​
39. Grasping at Fragments - Sometimes new acquaintances are old friends.​
40. In the Undertow - Allyson continues her mission, contemplates a final rest, but wants to end all the lies.​
Chapter 5: The Archer​
41. Shattering Point - Allyson confronts Jorryn about Rae. ​
42. Heroes Fall - Allyson confronts Taeli Raaf.​
43. Psychological Entropy - Allyson faces Vaylin & the Dark Lord of the Sith.​
44. Dangerous Game - Allyson calls Jyoti unsure what to do next.​
45. No Games - Allyson meets her new boss Djorn.​
46. Pay the Piper - Crimes of passion have consequences.​
47. Where's the Girl? - Allyson has to clean up a mess for Jorryn.​
48. The Archer - Allyson breaks her bond with Loske, hoping to protect her friend.​
49. First Contact - With the bounty and burn notice, Allyson prepares for survival.​
50. The Good and the Bad - Allyson is put in charge of a troublesome Apprentice Sylvia Virtos​
​
Last edited: Friday at 6:46 AM

| Armor | Shotgun | Sunglasses | Lightsaber | ​
You must log in or register to reply here.