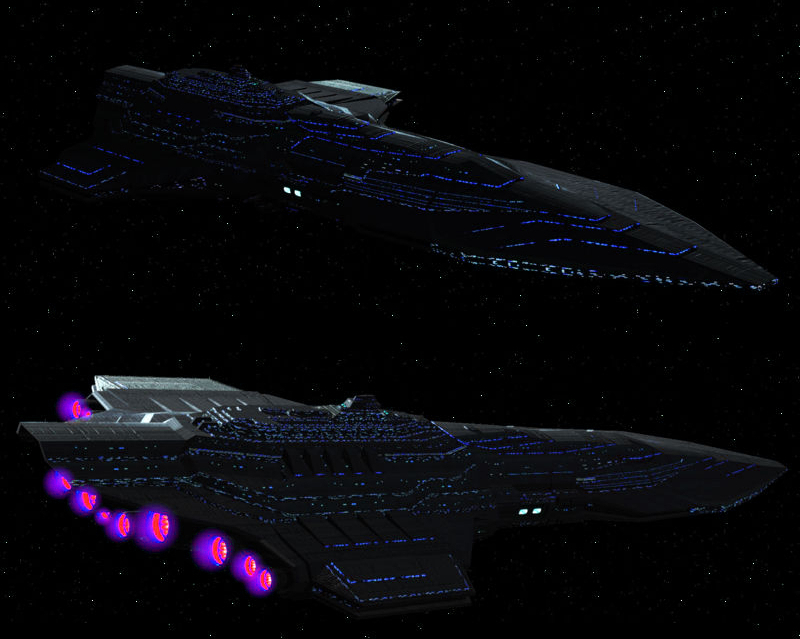 STRENGTHS
WEAKNESSES
DESCRIPTION
After the Dictator-class battlecruiser line up had been pulled from production, N&Z utilized the Valedictorian as the prototype for the newest line up; the Dictator II class. Utilizing the latest technology the company had to offer and being build almost exclusively in an undisclosed shipyard under N&Z control, this new line of Heavy battlecruisers was supposed to supplant the original line with a sleek new styling, more capable systems and more reliable operational technology.

Unlike the original Dictator line, much more of the used technology on the Dictator II was from either in house production and design teams or companies partially owned by the N&Z umbrella corporation, with certain notable exceptions mainly within the department of cyber security. However, all the weaponry apart from Arms Dynamic Lance guns were firmly in house designs, making it so that customers would more or less be forced to only be able to repair and upgrade their ship at designated N&Z repairdocks and shipyards.

Upon it's design, this ship was from the onset drawn with its predecessor in mind, with the thought of incorporating the former dictator's systems, but stimpkly update both the use of said systems and make its styling slightly less menacing, but all the more imposing. Defense wise, there were a lot of structural differences, such as ray shielded blastdoors, standard security droid battalions, elevators with blast charges, heat and energy sinks, the use of the newest infinium and ersteel compounds and utilizing matrix armor, trimantium alloy for the sturdy contruction of this new ship's hull.

The armament consisted mainly out of similar weaponry as the original line, priding itself on its overall flexibility, but simply added more in terms of numbers, as thanks to the ship's wider berth and overall girth, it was possible to almost double the overall amount of weapons without really impacting the structural integrity.

The Mediator was the third in the line of Dictator II Battlecruisers to be finished, however, due to the requests made by the clients, the hull of this ship is slightly wider than the regular versions, to further accomodate the larger hangar bays as requested. Alas, the increase in space for the hangarbays did make it less likely for collection areas for the gasses coming from the fusion reactors to be placed and severely limiting the space of the engine bays, thus further restricting and lowering the ship's overall speed and maneuvrability.
Last edited: Thursday at 1:47 AM

Character Bio
We have problems.

Do this and I will push it through approval.