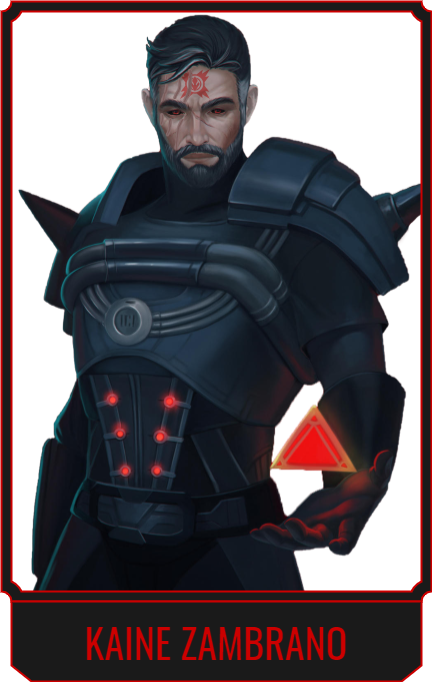 Carnifex is exceedingly cruel and capricious, ruling over those beneath Him with a carbon-jacketed fist. Having been immersed in the Dark Side of the Force for decades, all semblance of morality has been stripped away from His being to reveal cold heartless disdain.​
​
Having amassed so much power so quickly, Carnifex rapidly grew to believe that He, and He alone, was the dark axis upon which the universe rotated. He cared very little for other creatures, viewing them as little more than vague abstractions that paled in comparison with His magnificent existence. Viewing life other than His as inherently worthless, unless He attributed worth to it, He had very few qualms about murder and planetary destruction. Such rampant sociopathy and solipsism have lead to the deaths of millions at His direct command, His callousness knowing very few bounds of constraint.​
​
The sole few exceptions to this rule were those that He has attached himself to, chiefly His uncle Prazutis and those women He has taken for His wives. Because they had accepted Him into them, germinated His seed, and bore Him genetic offspring, He considers them an advanced extension of His will. They are not viewed as entirely separate entities, but rather another aspect of His overall existence. Decades of intimate connection with His uncle has led to the creation of a Dark Dyad between the two of them, linking their powers directly to one another, and connecting their minds across space and time. Their power was greatly enhanced when in close proximity to one another, an exponential replicating multiplier that had no theoretical limits.​
​
Despite the possessiveness Carnifex has shown to those who have become His wives, He shares little of that nefarious affection with His children save for a select few. Indeed, Carnifex thinks very little of the majority of His offspring. Most of them have fallen short of His expectations, but the worst of them all were those who had rebelled against His authority as their 'creator'. They are viewed with the highest level of contempt, amalgamations of genetic material that had gone awry from their programming. Carnifex is not above filicide and has purged His own lineage more than once in the past.​

The Vessel of Carnifex
2

Krax Zambrano, The Dark Lord of the Stage
2 3