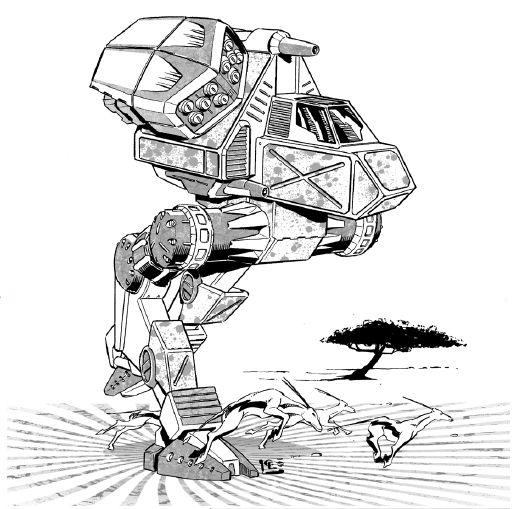 DESCRIPTION
Casper was a design that already somewhat existed over a century prior, the only issue was attempting to update such an aging design. One of the key figures that assisted in this task was through the help of Locke and Key Mechanics the previous year during the reformation of Court of Blades. Through them, they were able to update much of their aging battle computers along with encryption keys, new Life Support curtosy of Breshig War Forge Consolidated along with the new updated Overseer-Pattern Neurocrown.

The Casper is designed to carry five payloads, effectively five shots of ten missiles at a guided target before requiring a secondary vehicle to rearm or to just return to base. Carrying two repeater cannons to ward off any annoying infantry nearby, along with a blaster cannon to destroy small emplacements with some success on smaller vehicles. The missiles are effectively its offensive capability in a hurry, able to change from firing one to all ten at once, able to take out most light vehicles rather quickly though heavier vehicles may be more difficult. Generally these are in packs of three to five when deployed, with the command leader forward either in an arrow or diamond formation.

After the successful renovation, a contract was created between the two companies to keep filling in a lot of of the excess and look forward to creating new walker types. Currently however, they are still overhauling older designs till their facility is up and running.

This is a very interesting walker with interesting statistics. However, I didn't find any problems. Enjoy your new speedster walker!