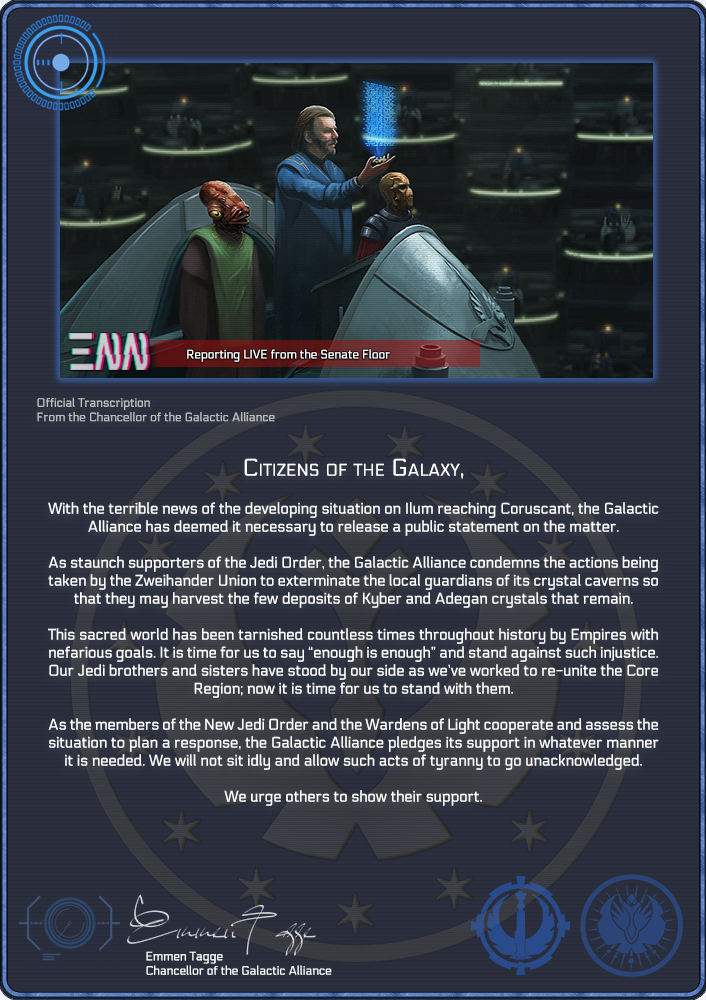 I seriously cannot believe this. As a former Admiral within the Core Alliance navy I send this message as an Ambassador bearing evidence of the contrary. Your recent condemnation does not include the fact that many of our members original expedition were literally eaten by the so called "Keepers".

However, I understand our move my seem...skeptical to say the least. I hereby request an audience with the Senate under my authority as a member of the Supreme War Council.

With that conference, I shall bear evidence of hostility. I understand these orders are extreme but we are not an empire nor will we ever be. Also, be aware that if evidence of which contradicts what was stated here comes to light, I shall person refund the order but you should know that only the Chancellor who gave the order has the authority to actually cease our actions.

If your Union’s expeditionary forces were met with hostility from these natives while trespassing on their lands, perhaps you should have taken it as a sign that you were not welcome. Instead, you’ve taken it upon yourselves to pacify them through violence so that you may ravage Ilum for military research. While you may not be the One Sith or Galactic Empire, you’ve proven yourselves no better than them in this instance.

What good is evidence of hostility from a primitive people? Should we rally our forces to purge Hoth for the casualties caused by the wampas? We are developed nations, Admiral Evore, and as such we should be held to a higher standard. Your people would not have been harmed if you’d simply chosen to leave the crystal caverns alone – as they should be.

The Union is welcome to send representatives to Coruscant to stand before the Senate and answer for your actions. However, let it be known now that this administration, the New Jedi Order, and the Wardens of Light will not tolerate a Union-occupied Ilum under any foreseeable circumstance.

Any further discourse may be done through private channels.

The Wrath of Achilles | The N&Z Corporation | The Zweihander Union​
You must log in or register to reply here.

More from Spirit of Unity