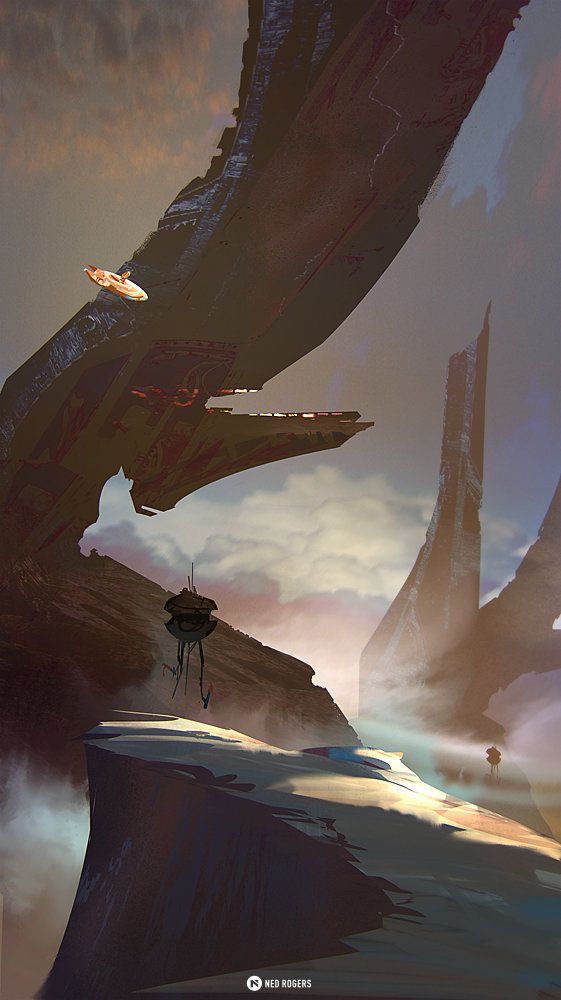 - Volcanic Range: Across the second largest continent on Caradim, in the west of Caradim is a massive range of volcanoes stretching for miles. These volcanoes are also home to indigenous creatures used by the Bryn'adûl to syphon the energy of the continental volcanic activity, powering all the Bryn'adûl facilities on the planet. ​
- Diracka: Diracka is the name given to the primary Bryn'adûl Super-Construct located on Caradim. This Super Construct took on the name of the large 18.3 million kilometre continent, as within recent months it has encompassed nearly the entirety of it. Accounting for nearly five times the amount of facilities and defences as a standard Super Construct. This place is home to billions. ​
​
- Kada-Sael: Kada-Sael is the secondary Super-Construct located on Caradim, a standard facility stretching over nearly fifty percent of the continent. ​
​
- Islands: The rest of the planet is dotted by islands, uninhabited by the Bryn'adûl and left to the devices of the various fauna on the planet.​
POPULATION
GOVERNMENT & ECONOMY
MILITARY & TECHNOLOGY
HISTORICAL INFORMATION :
Caradim was once home to six billion people, an outskirt world that acted as a smugglers hideout and a massive goods and supplies transportation station, the planets major cities were once massive space-ports that held orbital ports, tethered by sky-hooked space elevators. Caradim was also home-base for initial resistance groups that bombed Draemidus Prime after the Bryn'adûl originally returned to known space. Caradim and all her people, everything they ever built were eviscerated from the face of the planet.

The world has been under Bryn control for many years, terraformed into one of their primary core worlds.
Last edited: Jul 28, 2020

Most of this is completely fine- one thing before I can stamp this though:

Your last image link is broken, check that out and I will stamp it after that.

Fixed the last one.

Neat stuff and more lore for the Ancient Eye to play around with, always good. Character Bio
[member="Zeradias Mant"]
Use of corpses elaborated upon in military, explaining their use in necromancy by other planets under the rule of the ancient eye.

Edited the history, let me know if that's acceptable.

It talks about exporting bodies but says nothing about why they would be imported. On that note though, please touch on the role of 'undead' soldiers and necromancy in the Ancient Eye's military. Are they the main force of their fighting force, supplementary, etc etc.

The sub should not have any real world references, including mention of Earth. Gravity is okay as Standard. Climate should be something like Temperate or Frozen if its a single biome, or if there's multiple, list them.

Who were these Jedi? Did they rule from Nibelungen or Caradim? Where did the Ancient Eye come from? What was the transition of power like? Was it a swift military defeat, was there a surrender, etc etc. How are independent and oppressed people content with their situation with low standards of living, average technology, and what sounds like conscription? What kind of oppression are they subject to? Are there pockets of resistance that have risen from time to time? You speak of warlords and priests, here's a good place to explain that further. The planet is thousands of years old, spare no detail!

Made some edits. Including changing it from imports to exports, as they export bodies from the arenas.
Edits regarding the bodies, and the use of undead.
Also made some edits in the history.
Been busy today, let me know if you need more information or further elaboration.-

Don't forget to include a list of changes and tag a member of Codex Staff when you're done. Thanks!

Still working on this.

Srina Talon
Still working on it.

still working on this and the other one. They're just in the backlog.