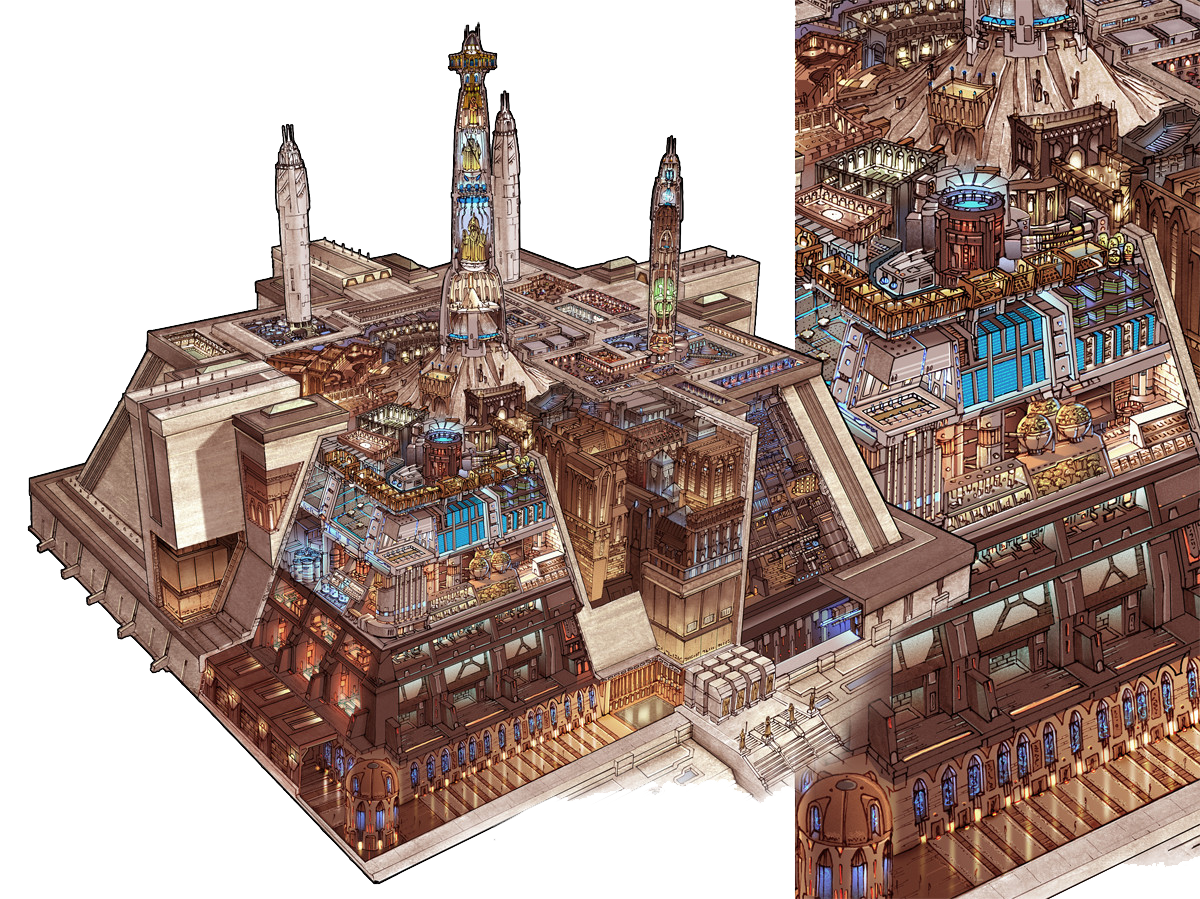 PROCESSIONAL WAY
A wide surface level boulevard which terminates in a ceremonial stair crowned with the statues of ancient Jedi legends who helped found the original Temple. Rebuilt and expanded several times over centuries its crumbling foundation still remains.

GREAT HALL
For those rare times when the Jedi must congregate in numbers. More than large enough to accommodate a gathering of multiple orders. Great mezzanines overlook expansive chambers. From here it is possible to access several remote areas for meditation such as the Room of a Thousand Fountains or the New Jedi Order's memorial Kyber Arch.

TEMPLE COURTYARD
Used for Jedi training and reflection. Younger padawans are often instructed here on the Force's mysteries. When the New Jedi Order first reformed on Coruscant a pilgrimage was made to sacred Ahch-To to recover the sapling of a rare uneti tree as a symbol of new beginnings.

JEDI ARCHIVES
Once rumored to hold the sum total of all galactic knowledge. This library is the New Jedi Order's repository of information and lore. It is a multi-level cruciform chamber centered around a large rotunda. Wings branch out from the rotunda filled with data and ancient texts. Most of this information is freely accessible, although certain sensitive materials are stored in the more secure Holocron Vault.

COUNCIL TOWERS
Four great towers surround Tranquility Spire which houses the Hall of Knighthood near its pinnacle. Each is still named for the council it used to represent, although the much diminished New Jedi Order only makes use of the High Council Tower. Abandoned and in various states of disrepair the Tower of First Knowledge, Tower of Judgment, and Tower of Reconciliation serve as a stark reminder that the Jedi have not fully replenished their ranks.

SHRINE IN THE DEPTHS
Long before the Ancient Republic's height an early cult of Sith consecrated this shrine at a Force vergence. Hoping to neutralize its dark energies the Jedi later constructed their temple over its ruins. Few in the New Jedi Order know of its existence for while in the past it was sometimes used to nullify darkside artifacts none dare confront the evil which stirs here after millennia of conflict.​
SECURITY

HIGH
Coruscant's Jedi maintain their own security force, the Jedi Temple Guard. Knights are pulled from the ranks to become anonymous sentinels as part of their lifelong commitment to the Order. It has been said this honored tradition requires absolute emotional detachment. Armed with lightsaber pikes guardsmen are an imposing threat to any would be invader, however the Temple is not equipped to fend off a large scale military assault.​
HISTORICAL INFORMATION
The New Jedi Temple is a historic wonder of the galaxy whose distant origins have been lost to myth and legend. Technological dating of now crumbling foundations traces it back as far as six thousand years before the current era. Scholars believe that the modern temple was formed not from a single structure but many ancient shrines woven together. For thousands of years this place would serve as a headquarters of the Jedi Order until the Ancient Republic's collapse and revenge of the Sith.

After centuries of civil war and plague, Coruscant was secured by a successor state known as the Galactic Republic and the temple restored to its former glory as a bastion of the Jedi. But this golden age of peace was not fated to last, for the dark powers of the galaxy coalesced under one banner. Conquering swathes of Republic space the One Sith Empire inevitably turned their eyes on the Deep Core and in the wake of their victory the Jedi Temple was mostly destroyed and its Temple Precinct converted into a Valley of Lords for One Sith leadership to draw power.

A dark era of tyranny and suffering preceded the awakening of a first Galactic Alliance, broken remnants of the Republic as well as frontier powers who chafed under the One Sith's bloody reign. Their campaign to overthrow this new Sith hegemony began in the Outer Rim and ended with the liberation of Coruscant. Sith holy shrines were purified and work began to rebuild old sites like the temple, but the Alliance Jedi continued to maintain their headquarters elsewhere first on Sullust and then at a new structure nestled high above Coruscant's Manarai Mountains.

In a seemingly never ending cycle of upheaval, the Old Alliance's ultimate collapse at the hands of a nascent Sith Empire formed in the Tingel Arm and Knights of Ren striking from the Unknown Regions culminated with a devastating raid on Coruscant which destroyed the Manarai temple and left its predecessor once more in ruins. It remained abandoned for years under Core Imperial rule until a growing evangelical movement which began with the Grayson Imperium's rise and continued through its evolution into a Core Alliance.

These Church of the Force fanatics began the latest restoration efforts. As treaties were signed which would lead to a new Galactic Alliance and a young generation of sensitives rose in the Core, this work became co-opted by the Senate as refurbishing a national landmark. It earned them significant goodwill with Coruscant's religious base but more importantly it provided legitimacy to a growing New Jedi Order movement at a time when the Galactic Alliance would come to rely on Jedi operatives to both restore stability in the Core and discourage terrorist factions like the Sith Empire from revisiting their malice upon those who would dare stand up for republican ideals.

Coruscant's upper levels have been reclaimed in the years since Alliance bureaucracy took control and now the New Jedi Temple is largely restored, however due to growing financial burdens during wartime and given the relatively small scale of the NJO work has slowed in rebuilding the last of its ruins. Much of the ancient structure is still abandoned for while this new generation may not live like the ascetic monks of old the temple is still meant for hundreds more.

This is ready to be moved to Location Creation for live review.

This is a beautifully laid-out, nicely detailed sub that makes good use of old and new canon. The descriptions are evocative without being overly wordy. Nice job! There is only one thing I'd like to see changed before I put my stamp on this:


You might also consider if there are any security measures other than the temple guards. Heavy doors? Air defenses?

Please reach out with any questions or concerns!

Its arranged by order of appearance, I've cross-referenced each source per your request.

As far as security measures, I'm satisfied as is. Its a religious shrine not a fortress and the NJO doesn't exactly have enough manpower to maintain an elaborate defense perimeter. This is a civilian location so the High rating is meant to reflect the threat Temple Guards pose to individuals or small groups instead of a full scale military attack.

Sounds good to me! This is Approved pending secondary

Work In Progress Order of the Uneti