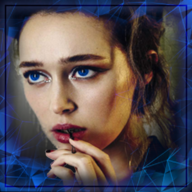 P h y s i c a l
A p p e a r a n c e​
Larentia stands at 5’5’’, with a slim but toned body after spending a lifetime training. Brown hair with light highlights and blue eyes to boot, her body is covered in tattoos and markings of her people and religion. Her long brown hair is more often than not done with braids or different styles in order to ensure it doesn’t get in the way. Every symbol left on her body signifies a victory or ascension. And while she’s no stranger to the outside lands, her fashion, for the most part, reflects her life on Figaro Favoura VII, simple, easy, handmade, with armor plating to protect her when necessary. In wolf form, her fur is a combination of golden brown and gray colors but her eyes remain the same blue as they are in their human form.

Larentia was born to be strong, a warrior, a leader. She was born to fight and to guide. Daughter of royal blood, blessed by the three spirits. At twenty-two, she was still very much going through her training when she’d volunteered for the current mission, taking a massive risk for her future. Little Wolf has never feared risks or making bold moves. When she was younger, those actions came without thinking. She attacked first and asked second, she took blood for blood without hesitation. She was her Moeder’s little warrior/little wolf from the moment she had come into this world.

She is always had a temperamental nature, an impatience to her actions; something Larentia has been working hard to break out of because of the role she is to have some day. A leader can’t be rash and only focused on vengeance, which Aren is well aware and works hard on trying to be more diplomatic in her actions when necessary but her warrior nature and need to hold her weapons more often than not.

STRENGTHS AND WEAKNESSES:
(+) Lupine: A changeling, a wolf, Larentia was born in human form but her natural form is that of a wolf. Once in the wolf form, she has meta-human sense of smell and hearing as well as greater speed
(+) Child of the Spirits: Larentia’s blood is, in some ways, tainted, as she was born with traces of ichor along with it, giving her a connection to the spirits from the day she was born. While claimed only by Doashim, she can still hear the voices in her head at times, especially when it dire need for them.
(+) Warrior Nature: She’s a fighter, a warrior, trained to handle different weapons and close-range combat.
(+) Force Body: Claimed by Doashim, Aren possesses a natural affinity towards using the Force power of Force Body.
(+) Languages: Galactic Basic Standard, High Galactic, Paecean, Bocce (high fluent), Binary, Sign Language (enough to get by), Ancient Sith (very little)
(+) Other skills: dancing, range of flighting styles, marksmanship, swordsmanship, chemistry/potions, diplomacy, strategy, public speaking, piloting (basics), cooking/food preparation
(+/-) Limited visions: Because of her near-unique connection to the spirits, Larentia occasionally suffers from visions, whether past, present or future. They’re irregular and at times a result of a strong signature left on objects and people and sometimes vague enough she can’t fully explain them immediately
(-) Short-life Span: As a Lupine, Larentia has a life expectancy of about seventy years.
(-) Temperamental: Similar to some women in her bloodline, Larentia is prone to mood changes which tend to seem more unreasonable than not. It especially shows in her ability to make some rash decisions, especially when her family is the one in line of fire. However, life has taught Larentia so much, including patience so this trait has become weaker in the recent times.
(-) High-Frequency Sounds: Whether in human or wolf form, Aren’s ears are sensitive to high-frequency sounds, could even make her ears bleed. However, because of this, Aren has forced herself to endure them and to lessen the time necessary to recover. On average, it takes her 20-25 seconds to recover from momentary sounds but longer for longer exposure.
(-) Force Body: Prolonged usage of the power can put her in a frenzy, where friend and foe become indistinguishable.
(-) Character Flaws: Blunt, bold, callous, dyslexic, fierce, practical, solemn, spoiled, stubborn, temperamental, withdrawn
(-) Disorders: Post-traumatic stress disorder, Insomnia
(-) Phobias:

H i s t o r y​
Little Wolf loved her world so much that she was willing to die for it.

Larentia was born to a Lupine who had dedicated her life to to their planet, who’d devoted time and energy to bring about the glory that was nothing but legend to their people and to the those that served them. Her mother raised her daughter to be strong, to be a warrior; prepared her for the future that was waiting for her. Larentia grew strong, grew to protect her Mother from anyone who would try to overthrow her rule It was part of her training as she had been chosen, trained, prepared for the future she was meant to have. Chaos did as it does, it spread like wildfire, bringing their world in peril. One future had been averted but another had been put into its place. Mother's tales spoke of happier times, calmer, devoid of the darkness. There had only been the curse that had clouded her. And instead, there was overwhelming darkness, an evil embedded deep into the bloodline. Grandfather was strong and corrupted, the grandmother was no different. He sought to make the entire family dark, corrupted, forever trapped in the fall. This was not the future Mother told her when she was little and the chaos only grew. One by one, the family had vanished. Time had to be repaired. It was this time when everything was beginning... the ceta were falling, the wolf was rising.

Her name was Larentia. She was a warrior of pure blood, born on the planet of her ancestors. Her future was meant to be clear and focused and yet, the chaos threatening them all had sent her on a path to repair their past. To protect their blood from what was to come…It had been a vision that had driven her to the journey. A vision of a battle. With what was left of their heart against the darkness, against him. He was the monster driving the fall. It would kill them, kill her. It was her own death Larentia had seen in the visions. It was a sign of the defeat ahead. Because what she knew, she stole her Mother's ichor container to protect herself, to protect one of her own.

She wasn’t meant to come but she was here with a mission.

Her earliest memories included survival and a joy of family, something not every Lupine was blessed with. She was her childhood spent in love and support, in a time of peace. Born of a powerful Warrior, a Witch, and a Lupine, Larentia’s spirit was always tied to the essences of the three spirits of Mandragora. She was their daughter as much as she was her daughter.

The young wolf’s history is a mystery however her fate is tied closely to the future of her home planet, which was why she had come, at the rebirth of a future Empire, the beginning of an unclear future no one was expecting, not even her family. Her mother could see through times past, present, and future, and yet her own future was clouded in mystery. Larentia made the sacrifice of coming to aid in unsure times…

The Little Wolf had a mission, a mission of saving the future. Her amulet protected her truth while she reigned Choas on the present in order to ensure her own past and their future altered.

Since her arrival, Larentia has kept close to some of the known Lupines. First, she sought out Katrine Van-Derveld as her future ascension on Figaro Favoura VII was closely tied into the events of the dark future she had come to change. This meant her temporary presence within the Confederacy of Independent Systems, as well as rejoining the Mandragora. She however already possessed the mark of Doashim, which had surprised Katrine at their meeting. Despite her identity concealed, the blonde Lupine chose to trust her and even assigned her Warrior of Ulf, her protector. Larentia adorned the armor and did her duty, after all, she was here to ensure her survival and the survival of her offspring that had yet to come. Despite her close connection to the Figaro Favoura VII Regent, Larentia did not bond with her, not beyond that was necessary for her to keep her path. Larentia also took notice at the Lechner siblings as Katrine's actions brought other Lupines closer to their origins. Still, she did not bond with them. As if the future depended on them not knowing too much of their own futures.

As the Agents of Chaos reigned, with Katrine's former best friend Scherezade deWinter joining them, as well as Alwine; Larentia observed the galaxy. Darkness was rising, Curupira was falling to it as well, Ket had disappeared once again; a terrifying monster was making its way across time and space, the Confederacy declared Confederacy First. One by one, the puzzles of the dark future were coming together. So, she threw dice and followed the Agents. Perhaps in Chaos, a new light could be found, Larentia considered. With them, she had witnessed the re-liberation of Ryloth in favor of changing the future but the betrayal of Derek and Muad Dib against his Chaotic allies proved to be in the line with the dark future again. Changing the future was difficult yet Larentia had no choice...

For in the vision, she had seen herself die on the battlefield, facing her own kid. Lupine against Lupine, the madness ripped through the bloodline. In the end, he would be to one to strike - rip out her throat. An Empire would fall....
Last edited: Jul 3, 2020