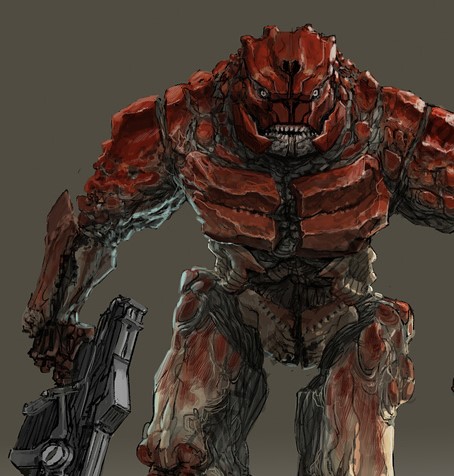 COMBAT INFORMATION:
The Brutes are also split up into various ranks and specialisations to encompass a wide variety of attributes and talents. Being fielded as a Company of forty Brutes, this is usually comprised of six-man squads.

These Squads are comprised in this manner: Two Brutes, one Grenadier, one Heavy & a Brute Major. These Squads are then organised into Units of four Squads. This unit of four is then directed by a Brute Captain, and thusly with every deployment of forty Brutes, two Brute Captains are on the field.


Strengths:
Weaknesses:
HISTORICAL INFORMATION:
One battle after another, the Brutes of the Bryn'adûl have been the longstanding companions to the imagery of the Chieftain. They were the first fully fledged military outfit to be branded with the Bryn'adûl name. The Brutes have been at the side of the Chieftain from the first, helping build their society into the fearsome entity it exists as today.

The Brutes are excellent warriors, reliable and have stood against the turn of the tide on every battlefield. The Brutes have existed as the enforcers of the Bryn'adûl for what is closing on a decade. They succeeded on Commenor and shortly afterward decimated the united forces of both Mandalorian and Confederate stalk on Eshan. The Brutes are fearsome, and endlessly loyal.

Now, marching onto the Galactic Battlefield, the Brutes have been expanded into greater numbers - compiled into task forces of forty. The Brutes have served loyally as the Bryn'adûl's main source of Baedurin strength successfully and will continue to do so throughout the Chieftains Galactic Campaign.
Last edited: Jan 13, 2020

So there are some things that need addressed:

Making edits at the moment.

But I don't see how the Gemstone isn't a weakness, given the calibre of weapons used by both PC's and NPC's, a thick layer of Durasteel can still be passed through pretty easily and is basically a kill switch for heavy arms fire. Which, is a evident weakness given how tough they are overall.

I've removed expertly trained and tweaked blood rage, as I clearly was too tired and didn't write what I meant to.
Additionally, I don't see how the Heavy weakness isn't a weakness as the armour sub states they can sprint over short distances but they can't go very far. This does impact PvE and PvP as enemies with higher levels of agility can easily outmanoeuvre them as they prefer to stay put or move slower.

The strength doesn't render it moot as the clear implication is that they can be lazy, the strength itself also in both the armour sub and this emphasise how dangerous they are in close quarters, not how it makes it easier for them to move or use their armour. I specifically stated in the armour submission that they are physical handicapped by the weight of the armour. That applies here.

Also added two new weaknesses at the bottom of the list.

This is ready for live judgement

Character Bio
Moved to pre-codex as per request.

Please remember to add a list of changes before tagging a member of codex staff to move the submission back for judgement.

Changes Made: Added a list of ranks, updated the Combat Information. Updated weaponry.

Character Bio
Moved to Pre-Codex as per request.

Please remember to include a list of changes when you tag a member of Codex staff to move this submission back for live judgement.