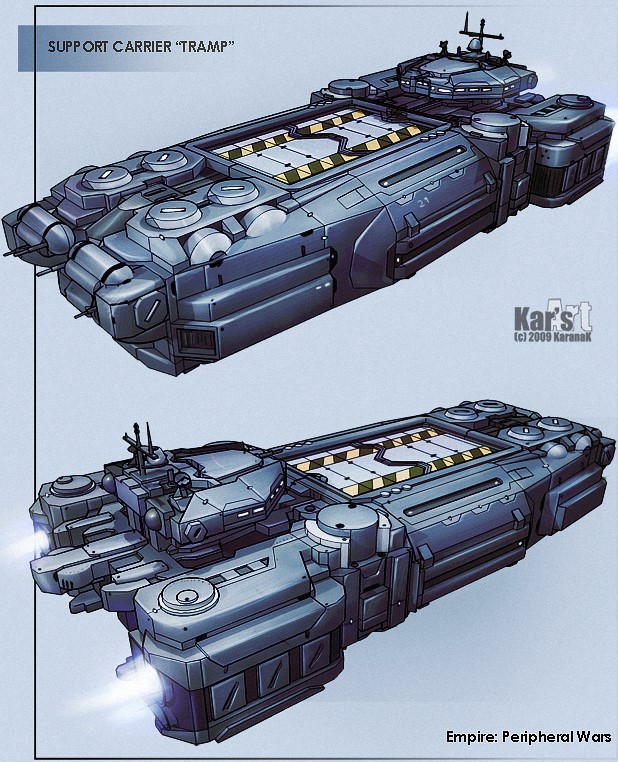 The traditional carrier is quite large, filled with flag officers, and escorted by smaller vessels - it is also rather bloody expensive. In sharp contrast to this, the Tramp-class is small, simplistic, and more often than not considerably cheaper than the two squadrons it ferries into battle; when in use by larger navies they are typically viewed as "building blocks" to be slotted next to frigates, cruisers, or even star destroyers in need of fighter support.​
In addition to these subsidiary battlefield roles, such vessels are often seen serving as forward bases for squadrons of patrol craft, most frequently hyperdrive-equipped scout drones and/or Phalanxes; they may also see use as resupply points for special forces and the like, though this tends to require less "inhumanly cramped" crew quarters, an issue normally resolved by shrinking the hangar until it only fits a single squadron of shuttles.​
Internal Layout:

The bridge superstructure holds a wide bridge backed by a rec room/mess hall hybrid and bunkrooms; elevated walkways at the top of the hangar section lead to the forward supply section and may be flanked by further bunkrooms for pilots or additional storage. The forward third of the ship is occupied almost entirely by storage for fuel and other consumables. The hangar section is highly modular and may, e.g., be split in two with one dorsal and one ventral compartment (different gravity directions, can cause confusion), replaced by launch tubes, or feature side-hangars instead.​
Automated models tend to have a smaller, bulkier bridge structure with no windows, which host data-brain banks and droid maintenance stations.
Last edited: Sunday at 7:15 AM