Everybody, I have enjoyed my brief but fun time with this site. Recently I've just had a lot of schoolwork and personal projects and the like that have gotten in the way of my rp time. Now I've actually managed to get a very nice high paying job but that's it's going to need all of my focus. So it's time for me to move on. Sorry for anyone who I'm in the middle of an rp with or have gained some history with my characters.

If you want to know what happened with each character here it is:

MAI: After learning all she could about organics she realized she'll never be one, but she could be something of an unseen protector and benefactor for those using the internet. She finally broke from her body and her consciousness returned to the mainframe of the galactic web where she does what she can for the poor and in need.

Nala Tu: After serving most of her life as a knight Nala had finally died in battle against a Sith, but saved the life of many in the process. (If any Sith want to take credit for it be my guest lol)

Aela Kellov: During one mission Aela finally found the man who killed her father, a big enough crime lord who had a number of slaves under his command. After a long complicated fight Aela was able to free the slaves and, going out with a bang, detonated her ship with herself inside to make sure the crime lord never hurt anyone again.

Satine D'nara: Gaining what training she could Satine returned to Zyggeria where she rules with an iron fist.

Salina Aviner: Salina had finally had one vision of her own future that had stunned her enough to leave the Moross Crusade and everything else behind. She went to her sister @[member="Feena Mason"], as well as her family and told them she still loved them no matter what before finally leaving and disappearing.

So, with that all said, I guess I can only say goodbye thank you for the great time and I hope those who still continue this site make it amazing. And no to leave you off with a song sung by Sarah Brightman, the character inspiration for Salina. 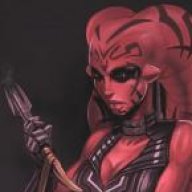 OMG Sarah Bghtman! I love her. She's such an amazing singer. Sorry to hear you're going btw.

Character Bio
Sad to see another member going, but I'll have to accept the fact, that people have real life too. Goodbye and good luck!

Sad to see ya go mate. Was fun while it lasted.

If you ever want to talk, I'm always here. Just like I told Smitz, I ain't goin ditch ya just cuz ya left the site. I'll PM you my Skype just in case.

As for taking credit for Nala's death... I have a Sith that could do that if you want. Which is funny, because that Sith is the brother of Gherron's Master, and I could probably work something from that.

WHAT
EWHAT
SO MUCH WHST

Character Bio
Sad to see you go! Good luck in everything you do and hopefully you may find some time to return and say hello.

For The First Time Ever, I'm Saying Goodbye...