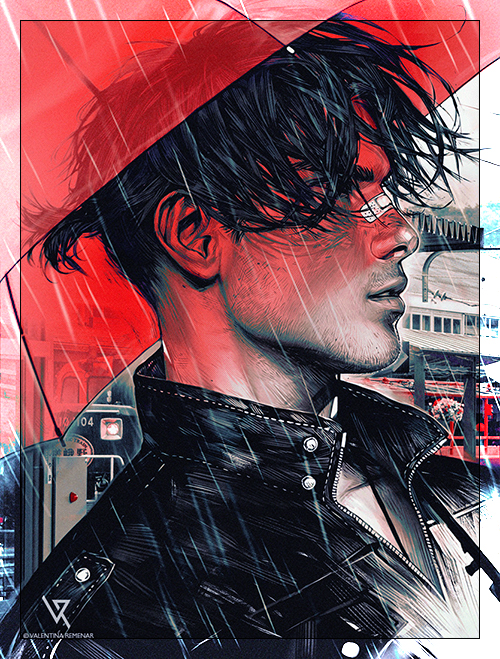 + Optimistic and easy-going​
+ Independent​
+ Mind games​
- Erratic Force training​
- Unable to stay serious​
- Has never been in a fight​
BIOGRAPHY:
Nikolas has never had a home in the traditional sense. While his parents were born and raised in the Core Worlds, they later migrated to safer Silver Jedi worlds, never really settling down on any. Just like many others, the Faselli family didn't feel safe in the always changing power of the galactic centre and wanted to start their family in a much safer territory. For a while, Marie and Dmitros did find security and fulfilment in the much more peaceful regions of the galaxy, and for years they moved among the numerous planetary systems, living the best life they could. However, a life like that was difficult and settling down on a new planet every once in a while was tiring. As the majority of the time was already spent on the family ship, the couple ultimately decided to forfeit the idea of living on a single planet. The expecting parents decided to resort to a life on a ship.

So Nikolas was born on a ship, not on any single planet which he could call a homeworld. He was raised among the stars, in the family of a merchant and an artisan. Soon after his birth (two years, to be precise), his sister was born, named Katerina, whom he became really close to. It didn't take the sibling duo long to discover their Force-Sensitivity, which the two vowed to keep a secret from both of their parents. Neither of their parents was sensitive, nor did they really interact with other Force-sensitives, there was also no other way for them to find out. So Nikolas and Katerina managed to keep their little secret, using their sneaky abilities for all their childish pranks and games. The homeless boy never received any actual training, learning everything on his own. While his sister was more skilled in different altering abilities, Nikolas found himself to be best at altering the minds of others -- which, obviously, resulted in numerous mind tricks, illusions and manipulation techniques. Nikolas attended a school, living his life much like any ordinary child, with an added bonus of tricking his teachers give him better grades and setting the school on illusionary fire on numerous occasions.

As you could probably tell, Niklas was a sneaky, sly, playful child. All of that was brought over to his adult years - he's by no means a serious adult, preferring playing games and his own comfort over any real meaning in life. Katerina, however, managed to become a more successful adult, finding no time for any games. She settled down in the Confederacy of Independent Systems, leaving Niklas to wander around the galaxy alone, his only companion the family ship.

What adventures he'll find now as an independent young man, nobody can tell.

Character Bio
Reserved.
You must log in or register to reply here.