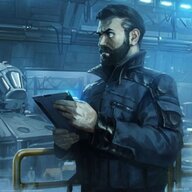 ADVANCED SYSTEMS
STRENGTHS
WEAKNESSES
DESCRIPTION
A secret commission by COMPNOR officials, the Phantom-XII was born to create a modern stealth TIE multi-role fighter. Tracing inspirations to the TIE/ph Phantom and TIE/hu Hunter, the TIE/V139 was tested in the skies of Yinchorr, where it proved to be a reliable craft and capable fighter. Following the specifications of COMPNOR agents brought to the testing fields, the prototypes were significantly bolstered on the armament field to correspond the more aggressive tactics the agents wished to use. At the end of the Yinchorr tests, the Phantom-XII was an impressive fighter, outclassing even the modern TIE/Vx that were coming out of the factories.
Brutus Holt, in charge of the TIE/V139, as he had been tasked with other sensitive files, decided to move the TIE/V139 prototypes to Aeten II for the next stage of testing, away from the eyes of any potential spies that could be observing the Dalness factories and most secret testing grounds. Upon arrival at Aeten II, Holt seized a considerable amount of stygium cristals and his team began working on a renewed version of the old Mk. III Stygium Cloaking Device previously used on TIE/ph Phantoms. He also requested delivery of Computerized Combat Predictors and 'Powerslave' Droid Brains to be installed on the TIE/V139. What resulted of these extensive modifications was a craft that didn't resemble at all the prototype tested on Yinchorr. Where the Yinchorr version had been a revolutionary multi-role fighter, the Aeten version was a stealth long-range fighter able to survive weeks away from a mothership. The vessel's capabilities and complexity of piloting were best handled thanks to the A. I. assistance, and the mass of secret technologies installed on the TIE/V139 resulted in the final addition of a self-destruct mechanism. Holt, at the request of Moff Haskler, produced two batches of TIE/V139s, one for the COMPNOR agents, that was delivered immediately, and the other for the Anaxsi's use, that was stored secretly aboard the Tormentor and ferried away, back to Yinchorr.
The Phantom-XII was ready to spy the enemies of the Order.

I really love the stealth ships! This is a very nicely made submission! Lucky COMPNOR agents!