Character Bio
Jon (Jorus) - Today at 8:38 AM
today i am a bith sith jatzwailer
http://starwarsrp.net/topic/98393-celebrations-day-one-the-shows-social-thread/#entry1429042
now witness the destructive power of this fully armed and operational ommni box
our jatz will conquer the pacanth reach. i have foreseen it.

Darth Carnifex - Today at 8:39 AM
Don't be too proud of this instrumental terror you've constructed, the ability to pump up the jams is insignificant next to the power of the Force. A lie! A lie I say! Remove this slanderous libel! Dead memes? These memes are as fresh as my character bio
[topic='68388']THE SHEET[/topic]​ I'd ask you to do mine, but it's probably not fair.


If anything I should do some of yours.

As the ghost of Steph Zenima inhibits your characters in like, 4 threads.


..... just have Smeg show up, wearing a wig, pretending to be Irajah


that would be fucking amazing

Louise - Today at 8:12 PM
and then when you can post, Smeg will exit stage left pursued by a rancor. 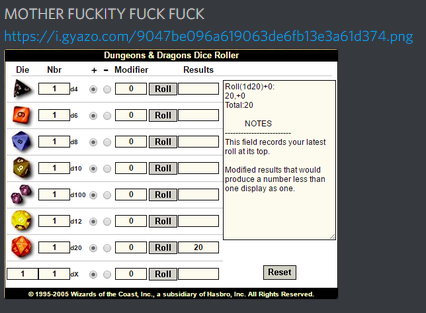 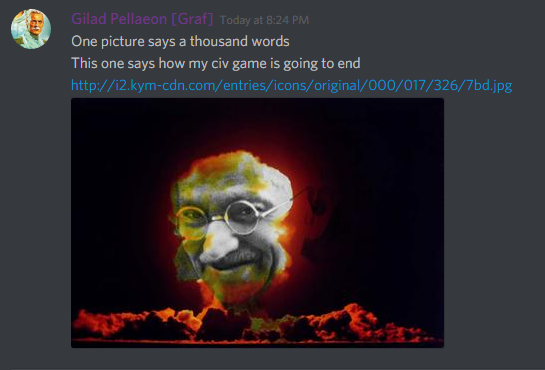 wtf ever happened to gamechap lmao 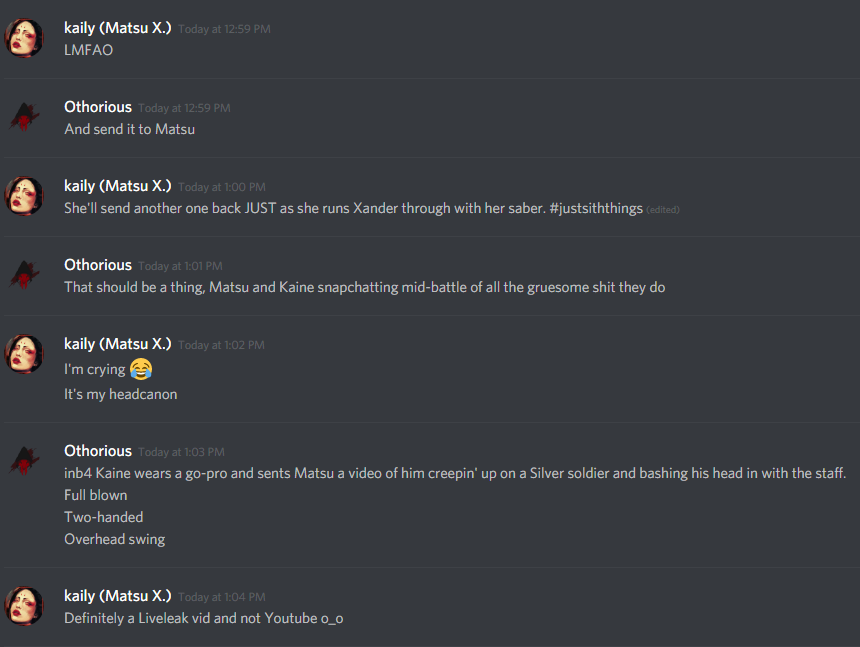 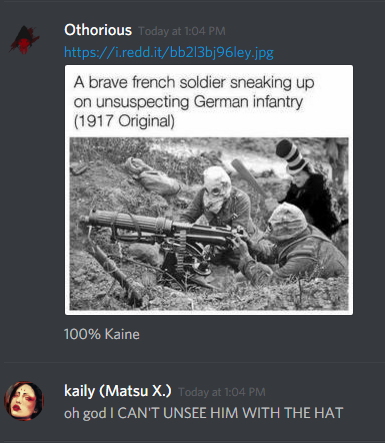 Character Bio
Andrew Ryan-Today at 8:32 AM


Come on, come along with me?


Heart break is the national anthem?


WE SING IT PROUDLY


WE ARE TOO BUSY DANCING


TO GET KNOCKED OFF OUR FEET


THE BEST PEOPLE IN LIFE ARE FREEFREE

Character Bio
Princess Alicia - Today at 11:22 AM
I love the idea that the First Order (movies) is so much smaller than the Empire that it can't afford to discriminate and needs every able body it can get: man, woman and alien, and train/equip them better than the Galactic Empire did(edited)
bestorder1
Ski Mask the Slump God - Today at 11:43 AM
^
Kaine - Today at 12:01 PM
Within many of the labor camps and mining operations in First Order space, a large number of individuals involved were from aliens species.
So they still semi-enslaved Aliens

Darlyn Excron - Today at 12:04 PM
picks up popcorn bucket Oh man i came in at the RIGHT time
Princess Alicia - Today at 12:04 PM
Rich aliens commit more crimes than poor humans. It's a fact.
Stormwall/Jorus/Ashin (Jon) - Today at 12:06 PM
Penalties are just higher for crimes more associated with aliens than with humans. Alien spice has higher mandatory minimums than human spice, clearly.
Penny - Today at 12:08 PM
inb4 FOSB conspiracy
Stormwall/Jorus/Ashin (Jon) - Today at 12:11 PM
don't even get me started on the War on Salt and Arcona incarceration rates
Rolf Amsel - Today at 12:13 PM
Really - if you boil it down, it comes down to the culture carried on by alien immigrants. For example, people move to where there's like people. So you've got a bunch of Rodians right? They predominantly live in a suburb of Avalonia, so Rodians who don't speak Galactic Basic naturally move in nearby - the problem is that once locating to Avalonia they have little to no income and find that they are often times making below the average income.
This in turn leads to the depreciation of property value and a general lack of care when it comes to owned domiciles.
In this case, the Rodians must work, spending important time away from their children and their community, only further compounding the problem.
And let's be honest, Rodians don't get hired as often due to their lack of aesthetic appeal. It's just a fact. Why hire a Rodian barmaid when a human one plays more towards your population?
¯\_(ツ)_/¯
And that's not even addressing how Rodians are portrayed in popular holo-films. Always toting blasters, drinking, smoking deathsticks - I mean the media is in part to blame too
These Rodian children don't have anyone to look up to
#Endrant.
Kaine - Today at 12:18 PM
Jesus Christ.
Doc Ven - Today at 12:18 PM
::applauds::
Ski Mask the Slump God - Today at 12:18 PM
i bet they wish they were white and human
Princess Alicia - Today at 12:18 PM
But if it's something cause by the social and economic environment they immigrate into why are their homeworld planets like Rodia and Hutta so unstable and crime infested that they have to immigrate to our space to begin with. I'm no human supremacist but there's an issue here we're not allowed to talk about because of the PC brigade shouting "racist!" when we try to bring up legitimate arguments
Rolf Amsel - Today at 12:18 PM
LOLOL
Doc Ven - Today at 12:18 PM
ohmyfuckinggoshI'mdying
Ski Mask the Slump God - Today at 12:19 PM
bet you thought racism was already bad with skin colour
welcome to wanting to be another species
k_hand:
Rolf Amsel - Today at 12:19 PM
The fact that grown adults just had a discussion about the socio-econmic consequences of Rodian immigration to Dosuun tells me everything I need to know about this place
:smile:
Doc Ven - Today at 12:19 PM
lol
Penny - Today at 12:19 PM
Meanwhile, my answer is : what Rodian immigration to Dosuun?
We don't need their kind of scum.
Kaine - Today at 12:20 PM
I hear Rodians work better in mines anyways.
Stormwall/Jorus/Ashin (Jon) - Today at 12:20 PM
Clearly it's because places like Rodia have been subject to unequal terms of trade - they've been included in the galactic economy as captive markets for manufactured goods and as sources of cheap labour and raw materials
if you seek the source of Rodia's instability, look to the Silver Jedi
The Wretched Hive - FTL and FTL Accessories​ I work with the most Interesting people. #Justdatalinked.

| The Sunsworn Consortium | Equipment Listing | The Thyrsian Hierarchy |
​
You must log in or register to reply here.