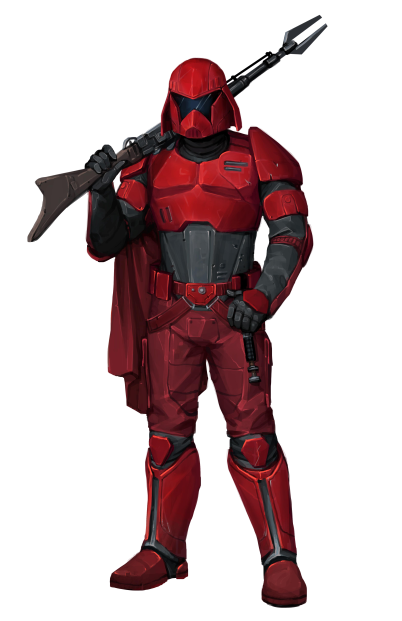 
The warrior known as Osbasid was born on the planet Osseriton in the year 800 ABY. Hailing from the Unknown Regions, Osbasid knew very little of life beyond that of his homeworld. Having just emerged from the Four-Hundred-Year-Darkness that had consumed the majority of the galaxy, Osseriton was wracked with civil strife amidst a crumbling infrastructure and sky-diving economy from fiscal mismanagement and protracted isolation from the wealthier sectors of the galaxy. In such a turbulent environment, gangs of warriors arose as the predominant authority on Osseriton. Osbasid belonged to one such tribe, known by many as the Nitro.​
​
The Nitro were well-known across Osseriton for their obsession with adrenaline enhancing narcotics, which they often ingested before engaging in battle with the dozens of other tribes that vyed for power and territory. Death was an omnipresent factor, and the thugs of Nitro fought without fear or reservation. Death was seen as a glorious fate for those who fought under the powerful effects of narcotics. Osbasid himself ingested copious amounts of these drugs during his youth, growing hopelessly addicted to them as his abuse only worsened as he aged.​
​
In time, Osbasid would come to constitute the leadership of the Nitro, though his reign as a warlord was short-lived as his enemies formed a coalition to take down the Nitro. Barely surviving, Osbasid clung to life even as his mangled body began to fail him. In his hour of greatest desperation, he offered himself up into the service of whoever, or whatever, could abate his suffering.​
​
His prayers were answered.​
​
As he lay dying, a man known to him only as Vornskr emerged from the gloom of his fading periphery and preserved his life upon the precipice of death. Taken from squalor, Osbasid was interned within a medical facility owned by his mysterious savior. Under Vornskr's vigilance, Osbasid was torn apart and stitched back together by the cold manipulators of the medical droids that attended him. They replaced the most damaged parts of his body with cybernetics and synthetic artifices, refusing anesthetic despite the tortuous agony such surgery inflicted upon Osbasid.​
​
When the machines had finished their grisly task, Osbasid was reborn.​
​
Indebted to the dark shadow which had saved him, Osbasid pledged himself to the service of Vornskr who placed him in the Blackblade Guard, his elite army of loyal warriors. Osbasid rose quickly through the ranks, conducting many military campaigns across the galaxy on behalf of his master. Though he suffered injury and near-death on countless occasions, his broken body was quickly mended by the heartless machines of his master. He eventually became more machine than man, all remnants of his humanity stripped away and only cruelty and loyalty remaining in its stead.​
​
When the previous Highlord of the Blackblades, Anthmar, was slain in battle, Osbasid became the next Highlord after a trial by combat against those who would also seek elevation. His ascendancy secure, Osbasid continued to serve dutifully for the next several decades as the brutal dictator of the Blackblade Guard, forever subservience to his dark and nefarious masters of the Sith.​
Last edited: Saturday at 7:14 PM If you would like to continue with this submission you may have it pulled back using the Submission Modification thread to request that it be moved.

Please remember to include a list of changes made when you tag a member of codex staff to move the submission back to live judgement.

Character Bio
Ready to be moved and reviewed.

Character Bio
Hello!
I am Kairi and I'll be your resident Judge reviewing your submission. Welcome back to the Codex!

Allow me sometime to tackle this review and I'll get back to you!

Hello again! Sorry for the longer than normal delay!

This submission is fleshed out and well done. I have only one question for clarity purposes - then we'll move it right along.

Tag me when you're ready!

Character Bio
I elaborated more on the EMP weakness.