The K-Fighter, our love, our patron, our dying grace

Hi and welcome to the first entry of Brent Rambles On About X-wing, the blog where I discuss my affections for Fantasy Flight's table top game for those who care--and for every member of the human race that isn't my mother.

https://i.imgur.com/reDR1hG.mp4
It was the beauty of this fighter that first drew me to the Khiraxz fighter, or "K-fighter" as she is affectionately called. Its hard to deny that looks alone makes this girl head and shoulders above most anything that you see. The K-fighter has a rusty, rugged feel that you still rarely get. The snub-nose gives her an X-wing like fee, while the unique snub wings gives her the E-wing like appearance minus that "zit cannon" that's fixed near the cockpit.

I got my K fighter in the Scum and Villiany Guns for Hire pack. This runs for about 20-30 depending on where you get it from, and since it contains two fighters, I recommend it. Packs like these are a good buy. I do use the StarViper that came with the set, but that requires an entirely different post that is dependent upon both my desire to write more of this garbage and your desire to read more of it.
Keep in mind, without the original K-fighter stand alone expansion pack, my mileage for pilot cards may vary from yours.
Let's look at the stats now:

With 3 attack dice, 2 defense dice, the K fighter matches the X wing in defense and attack. With 4 hull to the X wings 3, 1 shield to the X wing's 2, there are about the same hit points (realistically speaking), with less critical defense. Stats alone, the K fighter can hold her own in a punching match with an X wing, and with stats alone more than out-punches a TIE fighter. The prices are comparable for your squad points, that's why I squared them up. The other ship the K fighter compares to in points is the Y-wing. Keep in mind, this is stock, and anyone, I mean anyone who flies a Y-Wing stock has either lost their mind or is really, really up to something. There's no real comparison here either. The Y-wing's single defense die leaves it almost guaranteed to take damage every round, its two attack dice don't compare up--but its 3 shields and 5 hull make it able to soak up more damage than the K fighter could.
Now let's look at dials: 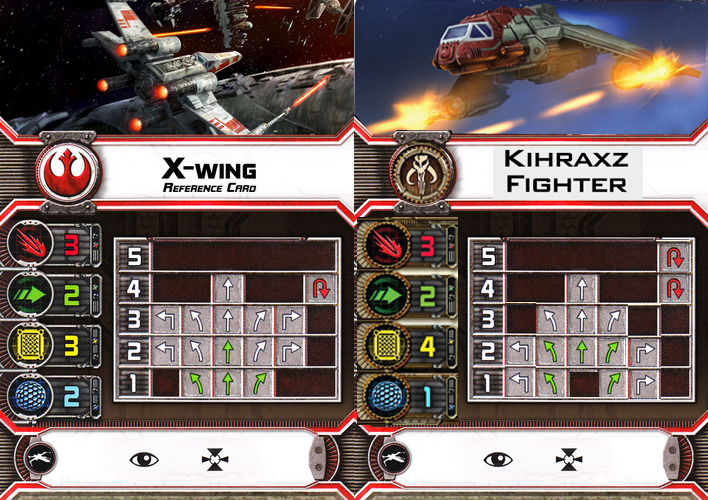 I have to admit, I really like the K fighter's dial. If looks sucked me in, the dial has kept me around. That 5 reverse is something so slick and incredibly handy. While the K-fighter can't do an X-wing's talon roll, or the Signor's loop of the TIE fighter, it can do the tight 1-turn to compete with a TIE. And yes you do hear a lot of people complaining that there are just 5 green maneuvers--but for me, that is worth it. The simple solution is either get the Wired upgrade, or simply don't joust, make longer runs and stick with tight attacks that keep your foe in your arc long enough to land several solid hits. But enough strategy for now.
You will notice that most of the K fighter's maneuvers are in the 2 range, and that is just fine with me. Honestly, I like that distance the best. I rarely see me doing anything more than that in most fights, except when I rely on that 4/5 reverse. Don't get me wrong, the 4 forward is a great tool in your belt to close the distance from 3 to 1, I just see me doing 2's a lot. There was an unfair bit of griping, imo, regarding the K fighter's inability to make a TIE pay for tailing it since it doesn't have a 1-strait. Again, the solution is that upgrade card the Pulse Ray shields, which also solves your shield problem. I can't tell you how many times I have used it and it's saved my goose.

my favorite repaint so far​
The action bar needs some attention too. With a focus and a target lock, I am somewhat disappointed on this. Typically I give my K fighter at least Velocity thruster upgrades to give her the chance to barrel roll (you never know when that little distance will make all the difference). But with the other great benefits that this fighter gives, I am willing to forgive it.
One of the best K fighter joys is this card that you get in the Scum and Villainy Guns for Hire:

An alt art card that isn't my favorite but was the only one I could direct link here.​
Basically, there are no draw backs to this title card, the best part is its non-unique. So if you have the ability to get several K fighters up, you can give each the Vaksai. Second, every card you equip is cheaper by one. It doesn't sound like a lot, but it really ads up and helps you squeeze the most out of each build. The other great advantage is the ability to add three upgarde cards--instead of just one. So three could be Stealth device, Munition Fail safe, and Velocity thrusters, each for one less. Its so good. I imagine if you wanted to, you could fly several K fighters with upgrades and mods you couldn't otherwise get.
I know this has been long, for those of you willing to read it all, I thank and commend you. All in all, I would say the K fighter is a good ship. If you fly scum, then she's worth the effort and every penny. She is just a real treat to fly, and even when I come up with all blanks or all eyes, the K fighter is just all around great.

And yes, there may or may not be a sub being built by me to reflect said stats in a Chaos-esque fashion. Stay tuned my friends. And stay classy. Feel free to post your thoughts, hateful remarks, or lack of thoughts.