Scurrg H-6 Bomber: Bringing Bombers to the Next Level

We take a break from your regularly scheduled programming to bring you Brent Rambles on About X Wing; a blog where I write about something I fill my freetime with, and empty my wallet for. Today's broadcast is brought to you by Bomb tokens. Love them or hate them, Fantasy Flight is here to keep them. And thanks to the Bomblet Generator, you no longer have to be a mind reader with amazing luck to make them work.

Before we dive into the H-6, let me give you a little down-low on bombs if you are unfamiliar with them or want some insight in them with this game. Bombs in X wing are largely hard to use. They typically get one shot, just like missile and torpedo cards. However, unlike torps and missiles, they are unable to be saved by bad rolls with the Munition fail safe. In addition, dropping mines can make it hard to do actions, since some require, and most require either require the foe to be in a range 1 of the foe or for them to go right over. Both are pretty frustrating for a card that is relatively expensive, most of which have no guarantee of success. But the bomblet generator doesn't do that. The bomblet generator offers a lot of remedy for that, it takes two bomb slots, but it is able to be dropped for free every time you reveal your maneuver dial. That is pretty great right? You better believe it. Now, on to the H-6.
The Scurrg 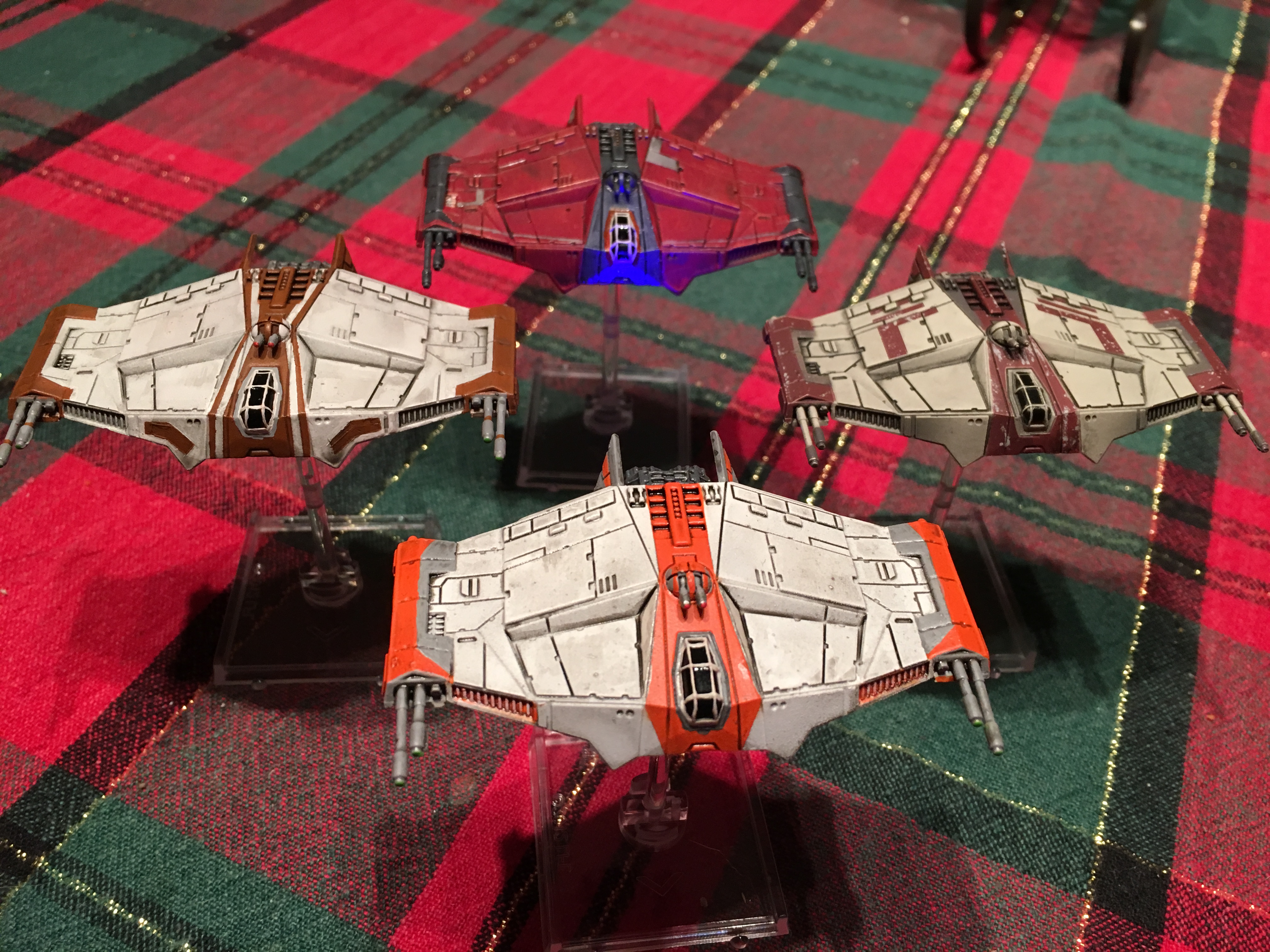 The H-6 looks like a flying rectangle. As the Butt Muncher one of my friends on discord noted, it looks like a great flying rectangle, a really awesome flying rectangle. I do like ships that look like this, they have something of a beautiful, rugged look. You can tell, this is a ship that means business and is here to get things done. The angular look offers this ship a sense that it can move, but the wide frame makes you know that it is able to carry a lot and take a beating. I can legitimately see this bomber swooping in on some poor fool and dropping a carpet bombing payload. Again, its just gorgeous. Now let's look at her stats: 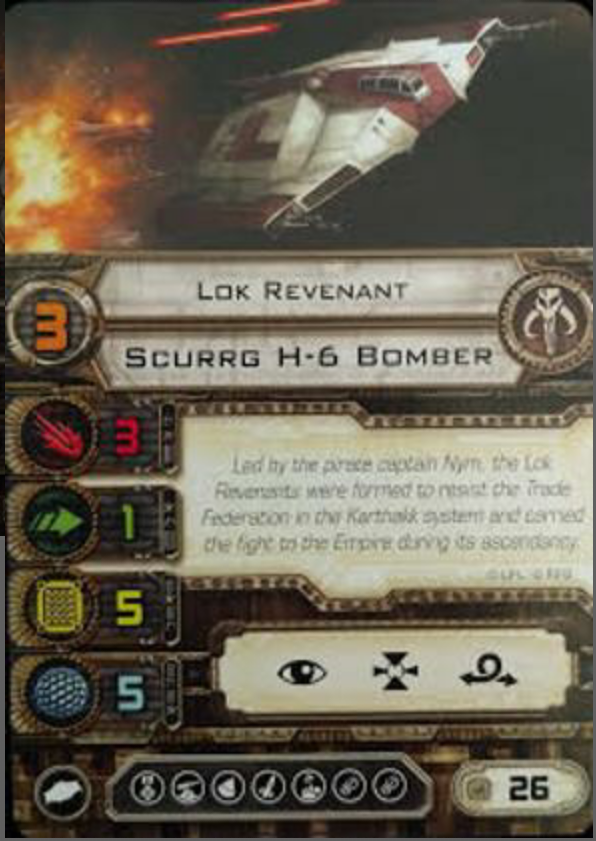 Stat wise, the H-6 is balanced. There really aren't any pilots you'd want to fly this ship with other than Sixa and Nym. The 5 shield and 5 hull makes this ship awesome. Again, she can take it hard and she has it where it counts. The 3 attack makes it able to offer a nice punch that is equal to an X wings, but still takes a bigger beating. Unfortunately, the H-6's single defense die leaves it pretty vulnerable to a sound smacking. But really, when compared to the Y-wing that it was supposed to replace and the B-wing it can pace with, and the TIE Punisher, it looks alright.
The maneuver dial for the H-6 is super unique. Their only reverse is an awesome Talon roll in either direction. This gives you a unique chance to swing around and throw your foe for a loop. If you need to really hit the boost, the H-6 can do a red maneuver 5 forward or a gentler white 4 forward. She is fast, there is no doubt about it, and she is agile. With a 2 and 3 strait green maneuver, 2 bank and 1 forward as fellow green maneuvers, you can easily get rid of those red maneuvers if you want. Moreover, that action bar has a barrel roll, making her even more mobile than you'd ever expect a Y-wing to be. I know I keep comparing the H-6 to the B-wing, but really this is the only ship that it can really be fairly compared to. The H-6 here can out pace it, I have watched Sixa beat Ted Num in 3 matches, and beat this same solo pair up twice myself. No small part of this is the very full upgrade bar. That H-6 is able to fit a lot under the hood. Besides the Bomblet generator, the turret unit is possibly the greatest of these the H-6 gets. And, in my opinion the H-6 even beats the B wing--mainly because of how much the H-6 can be modified. Let's take a look at that Bwing for you to get an idea, just focus on that upgrade bar on the bottom to see what I mean:

See? That's tiny compared to the H-6. The only thing (I am sure you saw it to) is the price gouging in compared costs. It's wild, my friends. Ten points more is a ridiculous cost difference. But if you ask me, it is worth it.
Now we can talk about what that looks like in the realgame. I recently did a match up with Scum Nym and Dash in they YT-2400 against some empire G00ns. While our crew was technically wrong (since Nym was in the Scum side and Dash is clearly a Rebel), we gave the Empire boy 20 extra points and made sure that our abiltiies didn't over lap. Even with that, we pounded his Decimtor, Lambda, and TIEs while he barely scratched my shields. I gave Nym the bomblet generator, the Havoc ship card, the scanner jammer, the Genius astromech, some advanced proton torpedos, the cluster missiles, wired, the Synched turret, and the Munition failsafe. Honestly, I didn't use most of that so don't worry if it confuses you. I used Nym, the turret, the Jammer, the Bomblet generator, and Genius. Honestly, that's all you need to know.

Genius with the generator came in handy the most. The H-6 was able to swing through the asteroids with ease, and I do have to give it to my opponent, he avoided them well with his Decimator and Lambda, but I did out maneuver him enough to easily target lock then blast his TIEs down. His big ships only got a few shots off, and by the time the TIEs were gone, I had only lost one shield and my friend-o was unharmed. That turret came in super handy. But, Nym's ability to ignore friendly bombs and Genius' ability to drop bombs after I show my dial came in super handy. I did what most would consider a classic star wars bomb run X-wing style. I consistently moved in to bump his big ships, dropped my bomb, and let it detonate with him in the blast zone. Sure, I didn't get to take any actions, but I was basically doing a free attack without any defense every. single. Move. That's the power of Nubian engineering. After that, I would shoot at the other big ship. The Decimator held out the longest. It does, after all, have a crap ton of hull. Note this tactic would be horrible against someone with defense lasers, unless you are willing to sacrifice Nym. But that is a very expensive sacrifice. 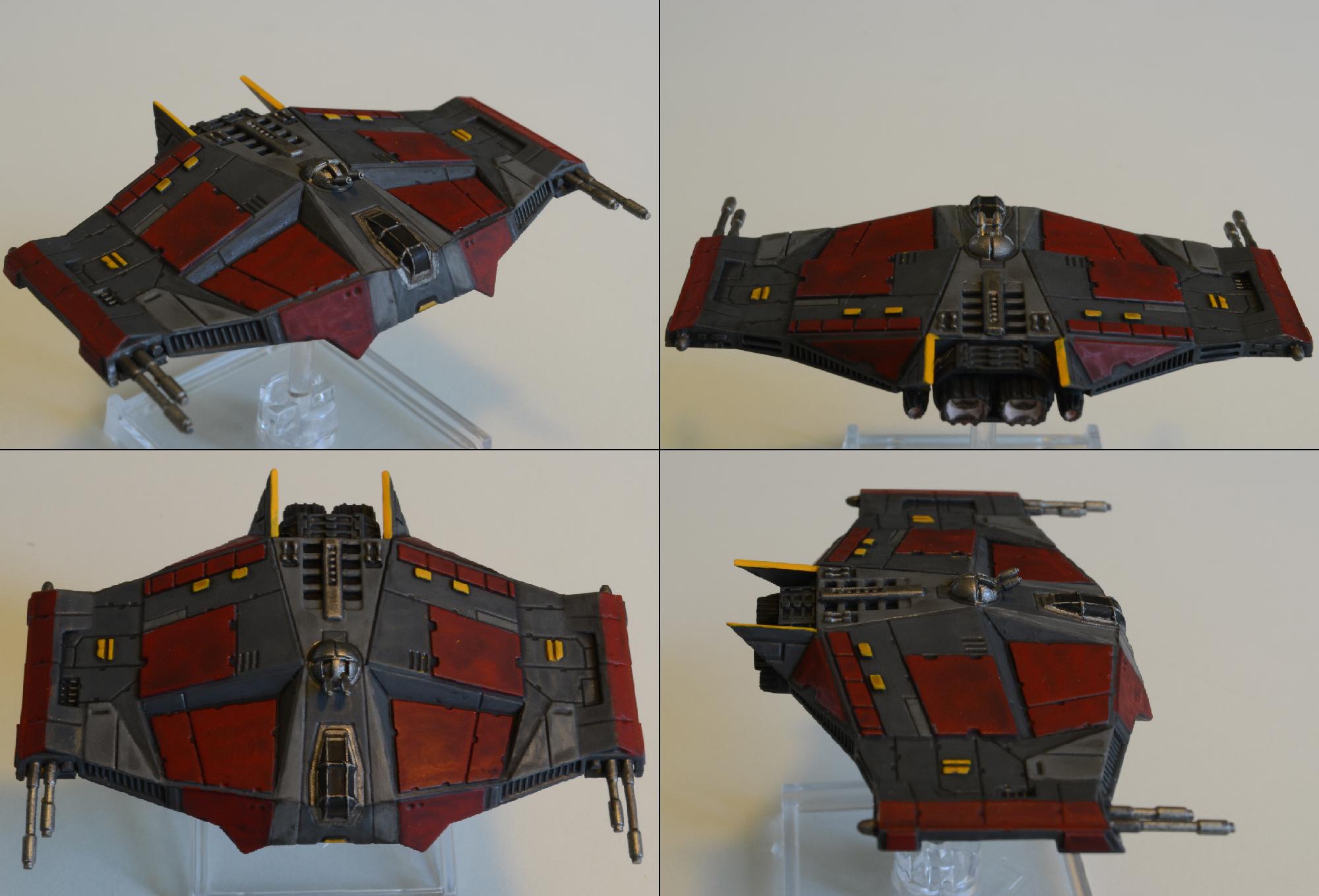 My favorite repaint I've seen so far of any ship. Its gorgeous.
My final verdict is that the H-6 is a force to be reckoned with in every sense of the term. She is a unique vessel that is further enhanced by her ability to be upgraded and modified to meet a variety of roles. I see the H-6 as a must-have for someone interested in playing the Scum or even rebel side with Nym. It puts the Bomb in TheBomb.com. The only thing I regret is the lack of an Illict upgrade to place the Advanced Cloaking device for extra defense. But the Sensor Jammer does make up a lot for that. Feel free to post any thoughts or ideas you have bellow. Stay classy my friends!