Character Bio
Mission: The work being put in to continue to terraform Togoria to allow the Togorians to return to the planet had gone along smoothly, until recently. Unfortunately, a particular group of raiders with the ability to harness the dark side of the Force have made off with valuable terraforming and construction equipment from the surface, slowing efforts almost to a halt. The Silver Jedi has sent a team on orders directly from the Silver Assembly to ensure that the darksiders are routed, and the equipment retrieved, sending one of their own to ensure that the task is finished.

Participants (Up to 5)​
​
- Josh DragonsFlame​
- Remy Singh​
- Jyoti Nooran​
- Charlie​
-​
​
---------------------------------------​
​
Togoria​
​
​
Darksiders in Silver Space? He supposed it was possible. They still had a very small cloud of influence, and they did not have the military might of a proper, overarching governing body. Darksiders, whether they be Sith or something else entirely could certainly sneak into their space undetected, though it wouldn't be easy. But routing them was their job no matter where it was, especially if it was in their space, so Josh was happy to lend a hand. The shuttle carrying a team of Jedi would land on the planet, a little ways away from the settlement so as not to attract attention or tip their enemies off to their presence near the settlement. They would have to hoof the rest.

Josh would step out, quickly masking his force presence in order to keep their enemies off their trail. If they were lucky, they would be able to move covertly, make a plan and catch the darksiders by surprise. Though something told him that it wouldn't be that easy... It never was.

Raiders using the dark side though... That too was unheard of for him. But why would they target this particular avenue? It didn't feel like a random act of looting, that was for sure... This felt calculated. Planned. 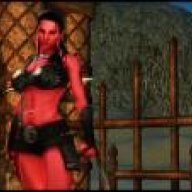 Character Bio
Togoria was a place she was used to, with a lok as she stood there and breathed in the scent of the world. These being were regarded as skilled hunters and fighters.. she had read some tales of them and their mating rituals... which were more like battles among the purebloods for dominence... THeeir hunting and methods were odd as well. The females lived in villages, technologies were for them and the men roamed the world gathering food and sending it back as well as gaining honor. Once a year they would return home for about a week to be with their loved one and then head back out for another year. The mating season and everything was strong and the clans large. So she was standing there with her saber tonfa's neaer her before she moved into a crouch and her face tendrils wriggled with a nod of her head.

Character Bio
The team was more or less assembled at this point. As [member="Remy Singh"], [member="Charlie"] and [member="Jyoti Nooran"] would walk out of the shuttle behind him, Josh would look back at the trio, before then looking toward Master Nooran. While she was no longer the Master Of The Order (Though she seemed to act like she still was sometimes...) she was still an important member of the Assembly who's guidance he generally heeded if merited.

"Do you have any suggestions for how to press forward, Master Nooran?" He would inquire, before quirking his head toward the other two. "Though I'll take suggestions all around, really."

The terraforming project was clearly important if two of the Assembly members were on this mission in particular. They needed to get that equipment back, and stop the raiders responsible as soon as they could. He couldn't shake the feeling they were being sabotaged on purpose.

An HK unit would step out from the shuttle as well, and approach the group before giving a salute. "Who are we killing today, Master?" The HK unit would address toward Josh, who stared at him a moment in disbelief.

"... Didn't I fix that?" Josh would ask the droid, referring to their "killing" comment and the modifications he'd made to the programming. He'd assembled it from scratch, but he'd needed to base the programming off the default template for HK units in order for it's functions to work properly, and that included some... Quirks. But Josh had thought he had ironed those out already. A "damnit" was muttered under his breath in turn.

"I only jest, Master. This is one of those things you refer to as "a joke" that you told me to get, yes? I am programmed only to kill if you deem it necessary, as you have made clear" The droid would correct, to which the Jedi Master would respond to with an unamused squint at the practical joke that a pile of metal had just played on him.

Character Bio
Josh consulted with Jyoti as if she was still the Master of the Order, though she had long stepped down from the position to continue her fieldwork as a shadow, and more personal pursuits. Perhaps that was just indicative of a naturally commanding presence, or her impatience to see things done.

"I think we should begin with the latest sites of theft and vandalism, looking evidence and interviewing the workers on the scene at the time. A lot of these processes are automated, but someone should have seen something."

Right after she answered, Josh's refurbished HK unit came out, seemingly primed for lethal action. She chuckled as he vented his frustration.

"So, I know a girl who could help you with your friend. She's quite handy with technopathy."

That was her euphemism for Mechu-deru. A much more neutral term that didn't immediately elicit the ire from other Jedi.

"Or, I could check it out myself," the cyborg said, scanning the hunter-killer droid. "What do you say?" 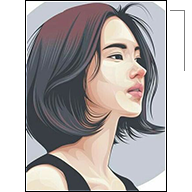 Character Bio
Charlie had just finished a meal bar as she watched Master Dragonsflame mess with his droid and Master Nooran tease him. A part of her wanted a Droid as well and she had hoped that somewhere along her training she’d get ahold of one. Crumpling up the wrapper, Charlie shoved it into her pocket and adjusted her belt. It seemed her frame was slimming down a bit too much to her liking. Maybe watching her sweets intake was having a negative effect on her finally.

Her hands fiddled with her pants string as she listened to what her master was talking about. She knew exactly the girl that was brought up and Charlie frowned. “You could always let her teach me how to use Technomancy. Looks like fun.” Charlie’s frown faded as she smiled happily. The thought of being able to read and work technology like Jyoti’s friend seemed like a helpful skill. Though teasing poor Josh wasn’t what they were really there to do, Charlie made note of what Jyoti had mentioned about looking up the recent cases.

“Along with talking with everyone we should try and gather what the authorities or anyone else could have gathered. Compare them to what we find and move on from there. Something could have been missed or well someone could be scared to talk..” Charlie shrugged, she assumed it was a good idea. “Uh, Didn’t the Sith occupy this planet some time ago? Could we be dealing with some underground group?” Remembering Tython and it’s history – the Jedi Enclave she was part of was very underground and quiet of their practices. It wouldn’t be unheard if the Sith were doing the same.

Character Bio
Josh trusted Jyoti's judgement, it was as simple as that. She no longer worked in an office, but her judgement had been sound in the past. She was someone he could trust to consult, he felt. He listened as Jyoti would suggest consulting with those who had been at the crime scenes and just overall doing a proper investigation. "Aye, might as well. Good place to start, at least."

Of course, he listened to Charlie's suggestion as well.

"An underground group... Very likely, actually. Very good, Charlie" He would praise the young one before looking toward Jyoti when she brought up fixing up his HK unit. "Oh no, he's fine. He just thinks he's funny" Josh would admit as he shook his head.

"I detect a change in your temperature, Master. I have begun to see a pattern of this phenomenon when-" The HK unit had gotten out before Josh quirked a brow toward him. "On second thought, feel free. Maybe you can find which wire came out" Josh half-joked with a causal shrug. "Technomancy though... Never heard of it. I'll have to look into it. I work with droids fairly often and build them as a hobby. Could be useful" The Jedi Master would admit as he would pull out a remote and hit the button, calling a speeder from the shuttle that would roll out to them, big enough to fit the group fairly easily. It was more covert than using the shuttle.

Character Bio
Remy was listening to the others but had seen something nice. A mosgoth flying overhead as the winged creature whooped and roared. her facial tendrils twitching in excitement as she pointing shouting in sithese with a hand. 'High above.' She didn't feel hostile intent herself but squinted to see some of the other creatures. She had read the field reports and basics of the world so the natives flying around on them was to be expected. That there was more to the history of the world such as when it became a fortress world under the empire or the sith empire massacring the world. Still she had one of her blade before crouching down lower to feel the world so she would know how to move around and hunt on it.

He looked toward [member="Remy Singh"] who he didn't, know, and would take a breath, staring at her a moment. She didn't elaborate, so he simply shrugged his shoulders as he looked toward the group again, who hadn't answered yet as to who'd be driving. "Suppose we could draw lots, or if someone wants to volunteer being the best driver of us, I don't mind that. But yeah, that aside, we could draw lots. Whatever works" He would remark.

Character Bio
She looked at the jedi master as the mosgoth touched down and roared. The massive furred cat like beings departing from them as Remy stood up tall. Most purebloods were tall and regal with muscles but they were like children compared to the thickly muscled togorians. Her head tilted to the side as she looked up at him and stood as proud as she could. Never reaching for her blades or weapons but still he muscles were tense before he spoke. "Who gave you permission to land on the planet?" They hadn't crashed which by their culture was allowed... once. It made things interesting and Remy pointed back towards the others when she moved towards [member="Charlie"] mostly to just be in line while the jedi masters could speak with the large cat. Remy watched the mosgoth with a look of excitement on her face. [member="Jyoti Nooran"] was there and Remy spoke down to the small padawan leaning over a little. As she asked a question to the padawan. "Taral?"
You must log in or register to reply here.

Militia of GRRRROOORRRGGHHH! (Open to SJO)

Trouble on the Flotilla (open to all)