Character Bio
So I decided to take this suggestion from discord and put it here for the community to see. For starters allow me to present the current state of my Graug sub. I'm well aware that during judging its going to get asked to change the tabs but I did it so I could have an example to start a debate on how we might tweak the rules. From my understanding the original ban came about because some Bad word's decided to hide things in their subs and ruin it for the rest of us who like things to look organized.

I am of the personal opinion that tabs, when used correctly, can make subs easier to read and follow and probably even help things not get missed. And lets be honest, way before tabs existed there were techniques going around the site of how to hide things in walls of text. You hardly need tabs to hide things. However, I do see how tabs could be used to great effect by those who are fools. That is why I am here to suggest some tweaks to the rule that would allow for the blanket ban to be loosened while also keeping things from going out of control.


1. The submission itself nor specific category headers may be "spoilered" or "tabbed"

Simps first. This rule would dictate that the sub itself (meaning the entire sub template) could not be hidden in a spoiler. It would also bar people from making sub categories spoilers or tabs to avoid trickiness where they may hide something in the name of a category itself.


2. spoilers and tabs may not contain within themselves other spoilers or tabs

No tabception. If you have a spoiler or a tab you get one and only one for that specific tab and/or spoiler. This will avoid the problem of people putting tabs inside tabs inside spoilers inside links to the darkweb. It allows for people to organize but disallows them from making Russian Nesting Dolls.

3. Spoilers must be named for the content they hold & Tabs must be clearly marked by a text-image no smaller than 154 x 26 pixels that clearly titles or summarizes the content

Try hiding that, Mr. Hidethat. This rule would ensure that tabs are always very clearly marked by a name that cannot be overlooked and that spoilers always mark what they contain - either by title or description. For instance all the tabs in my Graug sub use a png image such as this

Clear. Beautiful. Tells you exactly what part of my LOTR, GoW fanfic you are about to read.


Finally, the punishment. I don't know about you but I'm not like Mr. T. 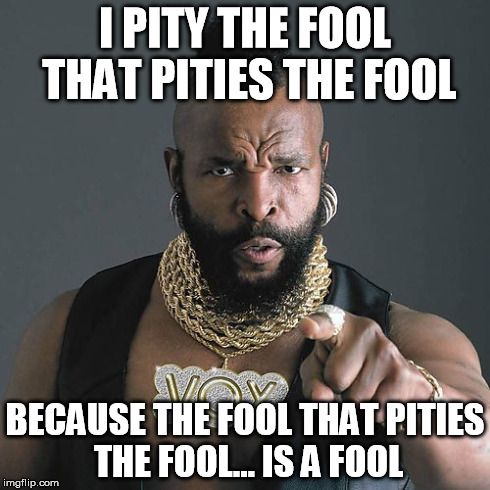 Punishment should be swift and take no prisoners.

4. Those found breaching these rules with intent to mislead judges is subject to a temporary or permanent factory/codex ban at RPJ discretion

Play the game, win the prize. There is no way you can talk your way out of the small miniverse you created with 50 spoilers inside your sub. If you are found out then the punishment should be exile - at least for a little bit.

What does everyone think? Yay? Nay? Should I go back to only posting orc pictures and sprite cranberry in OOC threads? 100% behind this. Tabs make massive info condensed and the sub looks neat af. I absolutely love you for writing this, if only because I really want to be able to direct the viewer's attention to specific parts of a submission from a big ol' art dump at the front, specifically for planets. I neeeeed my little fluff excerpts to separate, say, the Great Shallows from the Abyss.

Character Bio
Man y’all had all last month to suggest and debate this, lol

Character Bio
Lol, it’s fine, as I’m not the Admin to convince for this. I wish you good luck, soldiers.

Character Bio
Man where is

Definitely Not Tefka when I need him!

Character Bio
He’s been in a mood lately after I scolded him about his trolling and the negative impacts it has on the community.

He’s a survivor, though, and still around. Character Bio
Here's the main argument I see against this right now, and it has nothing to do with the previous incidents of "hiding things in the tabs" from before. While the tabs make things look clean and fresh (wish i had the patience with the code to do them myself), the code behind them can get complicated and confusing for a lot of people. When a Factory judge goes in to quote a section of the sub to point something out that may need adjustment in wording or something to bring it to within the confines of the site and factory rules, this extra coding can make things quite difficult for a judge trying to do so. So what I'm trying to say is that this probably won't be altered for the simple fact that it continues to have the potential to be more difficult on the judges during the review process for something they only volunteer their time to do.

I'm only one person, but this is what i see as the counter argument to this

A fair point - though my counter-counter would be that the a judge can simply copy-paste wording from inside a tab. To do so is easy and the code wouldn't interfere.

The Graug to be created and is the most populous​
Click to expand...

Character Bio
The main argument, and only, is whether the Factory Admin chooses to allow it or not. He’s openly stated he doesn’t want hidden information or spoilers. He needs no further justification than his opinion - his position isn’t elected, and he can choose to reject community input where he sees fit, as he sees fit.

He’s super nice and will never say it like I will, but you have a case to plead - not an argument to win.

He’s a Factory tyrant. I’ve never won against him either, so join the club.

Tabs and spoilers can go a long way in making things organized and thus making things harder to miss - for example that Graug sub is 15k words long. It is a unique case in this I'm aware but I use the tabs for sake of ease rather than anything else.

I could easily just mush 15k words together using only the guidelines of the template and make a huge wall of text. In my opinion tabs and spoilers serve as something that can be used to ease larger subs on judges because it helps break things into manageable chunks. Bad actors will be bad actors and there are countless ways to hide info from judges - if people are really that motivated they will find a way.

Taking away tabs completely takes away a tool that could help to serve judges just as much as writers. A little bit of boundary setting is what the doctor ordered in this case.

In short - tabs aren't the issue. People who want to be sneaky have no shortage of tools and a blanket ban does nothing to them.

But I am but a simple man at a keyboard drinking coffee.

Character Bio
I'm going to come at this from two perspectives:
1. #I'm a sucker for aesthetics.
2. A kinda newish codex judge (though I have to stress, my opinions do not reflect the site staff's opinions on this matter).

I really love how creative people can be with templates and tabs. If tabs were allowed in subs you best believe I'd be all over it! Aesthetic can often add to the submission and make it all the more enjoyable to read. This site is all about creativity and the templates are a fantastic example of how creative this community can be, I'm all for letting that creativity shine on all aspects of the board.

In the thread linked in one of the previous comments, a codex judge pretty much summed my view on it from a codex judge standpoint:


Judah Lesan said:
Tabs... no thanks.

Studies actually show the more links a person has to click to get information the more likely they are to pass up the information altogether . This move would result in a lot of time spent coding for the typical internet user to simply not click.

Tabs also create potential for hidden information. Keeping the templates as they are gives full transparency and takes away any argument that someone “just didn’t see what the sub said...” when it comes to mediating disputes.

Another thought... while I am all for prettying the templates, tabs become an option that some may not use. This makes the templates less standardized. Judges would still have to click every tab to make sure it conforms to template, so why give volunteer staff more work in something that is as much a hobby for them as it is for those who are not?
Click to expand...

As it's already been pointed out, some submissions can be lengthy, and there are definitely two sides to the coin here.

Once again, how neat and clean and pretty tabs can make the sub really does push all the right buttons for me.

But real talk? Sometimes its really, really difficult to focus on lengthy subs, even if the content is amazingly mindblowing and interesting beyond belief. Looking at a sub and having a decent gauge of how long it is by scrolling down quickly is a really good indication of how long I need to set aside to give the sub my proper attention. (Yes, I might actually be saying that a wall of text can be helpful but hear me out xD)

From looking at a wall of text, or lack of one, I can instantly tell whether or not I can fit judging it between my lunch break or whether I need to take an hour or two somewhere on the weekend to get it done. Or again, real talk, whether you have the motivation on that particular day to take up a long sub. You guys make really awesome stuff and it all deserves to be judged properly, with an equal amount of dedication and care.

If these rules were added, you wouldn't catch me complaining. But I do think that it would add another load onto people who are already doing this for free and for fun. I'd be pretty hard-pressed to pick a side on this if someone was forcing me, but I love subs and I love tabs so I thought I'd throw my two pennies in!

Character Bio
If you were a sucker for aesthetics you wouldn't make people squint when they read with that Book Antiqua font.

Character Bio
You should have gone to specsavers. Character Bio
The ban comes from spoilers being used to russian egg doll descriptions in subs, I have no idea why it was expanded to cover tabs, which by their nature can't hide stuff

Character Bio
When the use of tabs came up previously it was ultimately decided at that time that they would not be permitted. As you can see from above and the previous thread there are a variety of pros and cons that all hold weight.

As it is a new year and a new "Age of Chaos" Factory and Codex will review this request again, however, I make no promises.