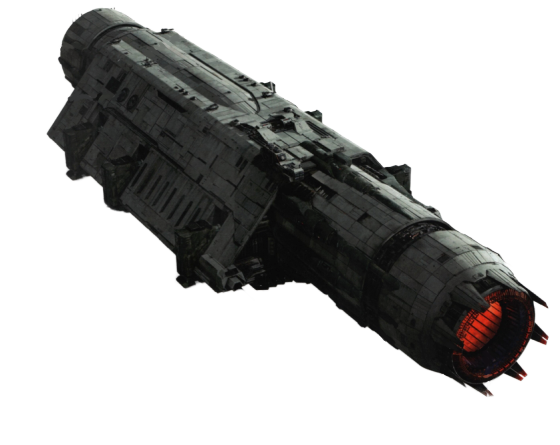 
The KVX 'Retribution' Class Kyber Cannon is a massive experimental weapons project developed by ApexTech Industries and its subsidiary Yato Automata, designed to be mounted to be a capital ship's answer to hostile Super Star Dreadnaughts. As its name implies, the Retribution functions off a simple, but highly effective principle; sustain more damage, and then deliver a devastating and highly lethal counter-attack.​
​
ApexTech Industries and Yato Automata approached this challenge of creating such a weapon without negatively impacting the way the ship it was mounted to function. In the end, they were able to create a system that perfectly synergized with a well-defended capital ship, a system that generated power when damage was taken by shields, thus allowing the Retribution to be charged without draining power from systems such as the shields, engines or weapons.​
​
It is sturdily constructed, being able to sustain damage without the possibility of it becoming critically compromised from a stray shot directed at it thanks to its combination of quadanium steel and impervium. The use of dallorian alloy helps to prevent the weapon itself from melting itself when fired, retaining its integrity before and after firing while the use of nutorium conceals the energy signature of the Retribution cannon from sensors if it is concealed from view, thus making it a deadly trump card that can be brought out to turn a fight. Its usage of a large Hurrikaine crystal as a focusing crystal also allows for the laser-produced by the Retribution to penetrate through defenses well. This also produces a laser with a distinctly purple hue to it.​
Last edited: Jun 7, 2020


Still being worked on.​


This submission is ready to be moved to Technology Creation for review.​ Balance wise
Unique -4
Extremely Large -3
Extremely Heavy -3
Extremely Small -3
Battlefield +2
Very Low -2
Extreme +3
None +3
Overall Balance -7, please either bump some things up or we can pass it through as is. Your choice

​
Ammunition Capacity has been bumped to Small from Extremely Small, Range to Extreme from Battlefield, and Rate of Fire to Low from Very Low. For what it is and does, I think its rating suit it just fine without the need for further modifications.​

If you are fine with it so be it. Enjoy the weapon.
Approved.