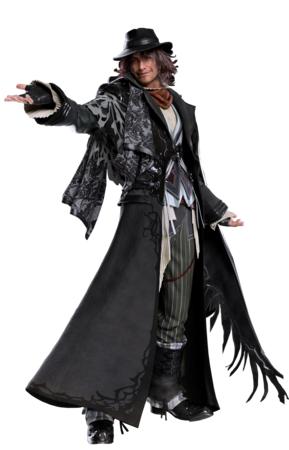 Fidavar is an individual who places a lot of value and worth based off of the intellect of those he is with. He generally has an arrogant and smug aura about him while around those he considers as unintelligent while respecting those who has an intellect that comes close or even above his own. Other than that, Fidavar typically has a laidback personality and is usually rather casual. He has a tendency to speak freely and in such a manner that suits him, but still commands a rather charismatic presence with his silver tongue. He enjoys teasing and goading people simply for his own amusement even if it might be to his detriment.


+Highly Intelligent+​
Fidavar was a former member of the Sith Empire's Research and Development branch and once a highly regarded individual for his intellectual contributions to the design and realization of a number of different projects that were made to improve the Sith Empire's military strength. His skills, while no longer under the direct usage of the Sith Empire, still are well spent on other scientific and engineering ventures under his own company, ApexTech Industries.​
​
-Direct Combat-​
While formally trained in the military prior to his joining of the Sith Empire's R&D branch, Fidavar was of low rank within the military and is unable to compete and fight with combatants with superior training than him. He relies on deceit and manipulation to come out on top.​
​
+Underhanded+​
Fidavar is a cautious individual, and usually comes prepared for any situation that may come up. With what he lacks, he more than makes up for with tech and/or bodyguards. With the proper planning, any situation Fidavar finds himself in typically will result in his favor.​
​
-Arrogance-​
There are a number of people who do not take kindly to Fidavar's arrogance and often mocking behavior. While he does tend to defuse situations with his silver tongue, there are often times conflict that come up as a result of his personality - and head on conflicts are typically the kind he would rather avoid if at all possible. ​

[ Enlistment in the Sith Military ]

[ Discharge from Military, Transfer to Research and Development ]