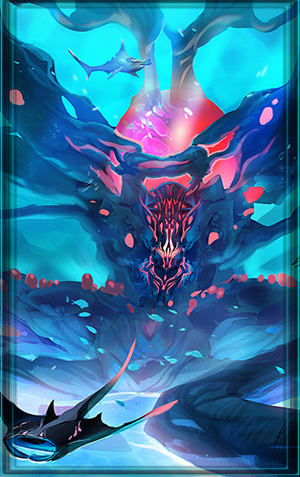 The more populous and common biome of the reef, the Sorn Gaddur (Crowned Thorns) describes the vegetation that inhabits this region. Razor sharp and unyielding, this underwater long grass is deadly to even armored adversaries and is home to thousands of fauna that have evolved to navigate the treacherous terrain. Kilometers of long seaweed and kelp pepper the landscape giving shelter to prey and predator alike, as the Sorn Gaddur defends the reaches of the reef like a natural barrier to larger fish.

At some point, the shard of a worldship found it's way into the reef. This is thought to have happened during the Netherworld event, when Akala invaded the Galaxy and began reforming it - but it's unknown exactly if that's how it arrived or why. All that's known currently about the Bot'tirnna biome of the reef network is that it is very.... alive. The tree, a pulsating red shard, has unknown affects on the wildlife around it. Well, not entirely unknown. Yorik coral is known to grow faster, flora and fauna of all natures react more aggressively, and the entire region seems... darker for it. Though near the surface, only some 100 meters below sea level, the tree has existed for at a minimum the last one hundred years... though it's a mystery if it's existed on Yuuzhan'tar for exactly that long.

Despite the very alien and foreign vibes the tree emanates, it gives a sense of calm to those who make it past the voracious wildlife. As the explorer Yamatha annotated, "I have never once felt such at odds with my own nature, nor glimpsed into my own soul as deeply as I did when I met the World Tree.... I was not myself, I wanted to be better."

Yamatha, renowned explorer of Yuuzhan'tar, has depicted the Grish Pulgo as one of the few unassailable and indestructible locales of the Yuuzhan'tar system. As the Moross Crusade's efforts proved, not even the unprotected wilds of the ocean have the defenses to withstand against a fleet of warships - but given enough time, the planet could easily recover. Below the Blood Forest lies an intricate and vast network of subterranean tunnels that trek for unknown lengths within and throughout the network of coral. Heralded as a dangerous and futile venture to explore, it is thought to be more likely that one would get lost in the caves beneath. Worst yet, due to the ever changing landscape of the seafloors of Yuuzhan'tar, the caves are always moving and reforming. No two ways would be the same for long - Yamatha, in his excerpts, wrote that he never once thought it a good idea to set foot inside the Murtag Shofd.

One could never know what lays beneath, nor how deep they would go.

Though alien to behold, the Kapurd Ovs is a beautiful and intrinsic sight to the uninitiated and seems to defy contemporary laws of vegetation. Unlike its neighboring biomes, the Kapurd Ovs is home to the more tranquil sections of the reef. Plankton and other small invertebrates mostly populate this shallow area, seeking shelter from the deeper predatory-heavy waters. Not large enough to support as great an ecosystem as the others, these biomes can be found closer to the surface and are deemed relatively safe by explorers to the untrained and amateur enthusiasts. Most tourists venture to the Kapurd Ovs, mainly to see the inverted mushrooms and bright blue waters that inhabit.

There are places in the Galaxy that defy all laws of physics, that unravel what is known, places that no science could explain. The Khöös Khöös is such a place, a blank small tract of land within the reef that harbors several giant perfectly spherical chasms, holes in the seafloor that permeate deep through the crust and into further reaches than have been explored. Assumed to be naturally formed, the depth and magnitude of these holes are not what captures one's curiosity, Yamatha writes. It is what emanates from them that baffles the mind.

Periodically throughout one standard day on the planet, massive bubbles of various gases erupt from the Khöös Khöös. Upon closing in on the surface of the ocean, these massive bubbles begin to rapidly escalate and replicate, earning the name "The Infinity Bubble". What causes this transformation is unknown, but the explorer Yamatha writes in his records that these bubbles break all common perception of the event as it violently approaches the pinnacle of it's rise. Light bends in unexplained fashion throughout the reef during this event, and once the bubble (or bubbles, depending on what is percieved), a ominous aurora of varying light explodes from the ocean's surface and into the sky with deafening sound.

What baffled Yamatha the most is that he thought he perceived a rare event of scientific proportion, until he recorded another 71 similar following events that same day.

The Kwa Holdings Empire has no detailed recordings of the Grish Pulgo.

The Ossus Project begins on Yuuzhan'tar, and onto Ossus, as dictated by the New Jedi Order. Research is conducted on the Grish Pulgo to better understand coral reefs and the invasive species of the Yuuzhan Vong's biots.

The Gulag Plague reaches Yuuzhan'tar, denoted as "The Breath of Yun-Yuuzhan". Grish Pulgo is not affected.

Though no records of the Grish Pulgo exist during this time of the Four Hundred Year Darkness, researchers agree that the Bot'tirnna is thought to have been created sometime around this year.

The legendary sea explorer Yamatha conducts a survey of the Grish Pulgo at the beginning of this year.

It is assumed 25% of the reef is lost to the Moross Crusade's sacking of the planet during this timeframe.

Another wonderful submission. I enjoyed the quote from Yamatha in the Bot'Tirrna section, and, the art is fantastic.

My only suggestion would be the same. If there are any applicable links that can be added for uncommon events/items that writers may not be familiar with - That would be great. Otherwise, I hope to see more from you soon!

Just tag me when you're ready and we'll get you on your way.

I don't have any other links at this time. Ready!

Approved Location The Blood Trail: Backbone of the Unknown Regions