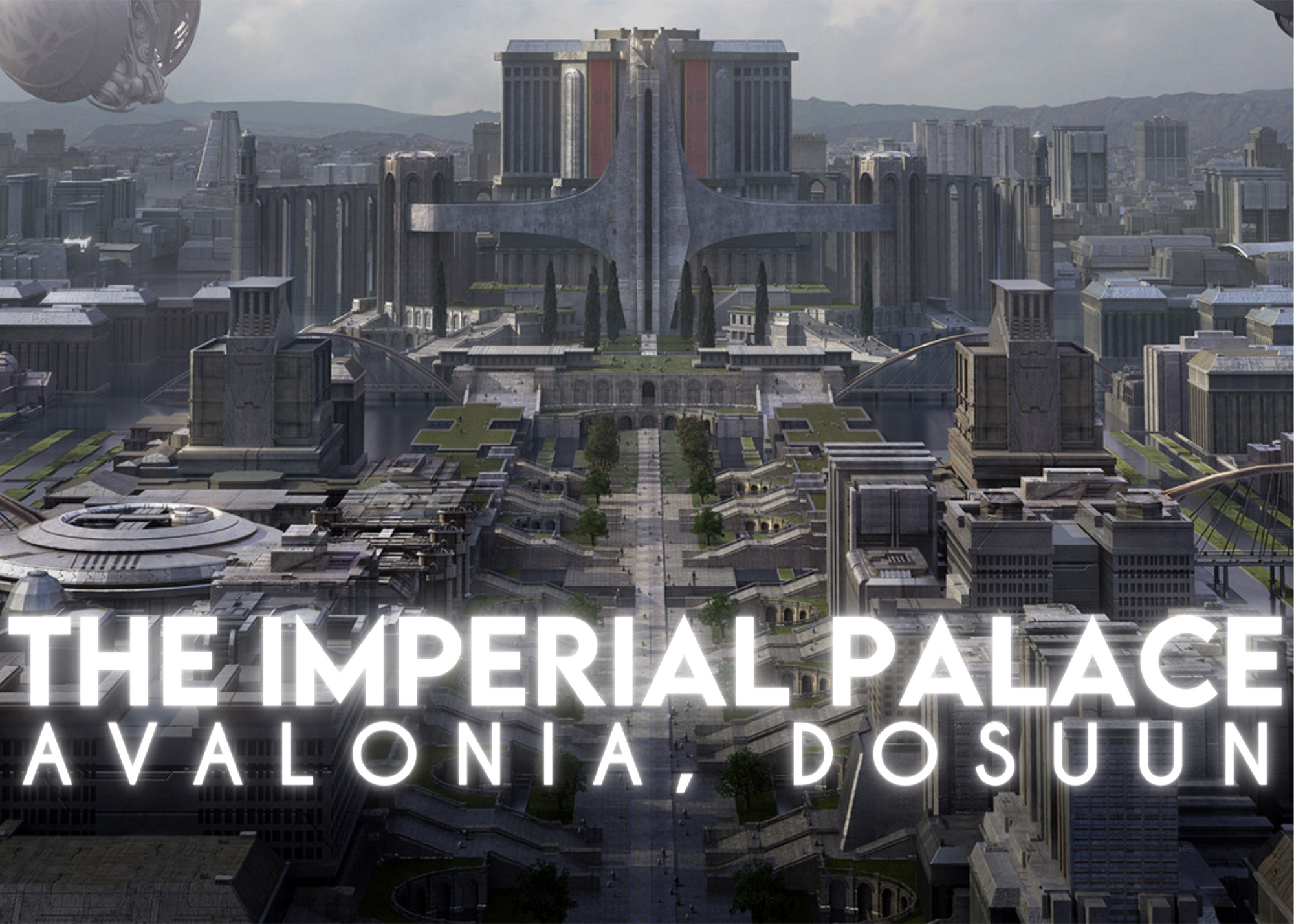 The Ellipse
The large, semi-oval space that sits between defensive barrier and gates and the Palace itself, the Ellipse is essentially a broad driveway that allows for ingress from and egress to the Mall to the Imperial Palace proper. A reinforced porte-cochère stands at the entrance to protect those entering or leaving the Palace from the elements (or worse). The Ellipse is the site of formal and ceremonial military drills such as the Changing of the Guard, which tourists from all over the First Order come to view from the barriers.

The Ceremonial Throne Room
Used for formal state occasions and royal ceremonies, the Ceremonial Throne Room is almost entirely for show. Real governing does not happen there, but it looks the part as a large room with a vaulted ceiling, with elegant red damask walls and beautifully upholstered chairs for both visitors and Sovereign. The throne itself is an ornate, gilded chair, upholstered in filigreed crimson damask and emblazoned on the seat back with the Natasi Fortan’s cypher reflecting NRI for Natasi Regina Imperatrix. The throne sits on a raised dais, beneath a canopy of lush velvet trimmed in gold brocade.

The State Banquet Room
A massive room paneled in white with gold accents, the State Dining Room was built to impress. Featuring a double-height ceiling, and no less than eight crystal chandeliers that cast the room in dazzling light. The room is meant to convey the power, prestige, and wealth of the First Order, to provide irresistible hospitality as a tool of diplomacy to foreign visitors graced with invitations.

The Balcony
A relatively small outcropping from the front of the Palace, and reasonably low to the ground, the Balcony (actually one of many balconies across the Palace) allows the Supreme Leader and the Royal Family to be seen during events of national importance, and so it is close enough to the street that subjects in the plaza in front of the Palace can see whoever is on the balcony.

The Bakuran Gardens
Situated far to the rear of the Imperial Palace, the Bakuran Gardens are open to the public and are thus separated from the Palace Grounds by extreme security. These gardens, done in the ornate, formal Bakuran style, are also where the Supreme Leader occasionally hosts outdoor events.

Chapel Royal
On first observation of the Chapel, one could easily mistake it for modern. However, this is more a result of its minimalist design than any specific modern aesthetic. The Chapel is a space of quiet reflection and religious observation when the Supreme Leader is unable to attend the Temple of the Enlightened Balance elsewhere in Avalonia. Natasi Fortan requested a small, simple space, devoid of finery, and that’s what it is. Designed to seat no more than twenty, the Chapel may also serve as the location for small religious gatherings like christenings.

The Situation Room
A large conference room, dominated in its center by a massive conference table that can comfortably fit thirty, and uncomfortably seat sixty. The conference table is equipped with all manner of technological advancements, including holoprojectors, communications devices, and other gadgetry. The walls are lined with monitors providing readouts from any number of sources, from public holovision to status and scanner readouts from any location or ship in the galaxy.

Government Offices
Each Moff has an office in the Imperial Palace, accompanied by offices for support staff. These are in addition to the other are they may have elsewhere, allowing for a convenient place to work, meet, or prepare for meetings at the Palace. In addition to the Moff’s offices, there are hundreds of other offices for sub-cabinet officials, support staff, and members of the civil service, as well as members of the royal household, like the Supreme Leader’s private secretary, press secretary, and others.

Royal Apartments
Spanning three stories at the apex of the Imperial Palace, the Royal Apartments are the personal domain of the Supreme Leader and the royal family, for their exclusive use as and when they choose to occupy them. Given the security requirements in place, the space is much less traditional and Galidraan-inspired than some of the previously-described state rooms in the public spaces. There are traditional elements to the furnishings and setup, but the architecture is pure Imperial efficiency. Sleek and modern, with touches of subtle luxury, it is outfitted with the latest in First Order security measures to ensure the safety of its occupants.

HISTORICAL INFORMATION
The Imperial Palace began its life with the original incarnation of the First Order. Created to be an impressive edifice of strength and dominance. It served as a residence for Sieger Ren and the headquarters of the First Order’s imperial authority, the Supreme Leader. The original structure was badly damaged during the Ssi-Ruuk Imperium’s Sack of Dosuun, and scrapped entirely by the newly rechartered First Order when it retook Dosuun. However, when Natasi Fortan was crowned as Supreme Leader, she insisted upon rebuilding the Imperial Palace to its former glory and, indeed, to surpass it. Leveraging cutting-edge technology to increase the durability, stability, security and efficiency, the Imperial Palace was reborn from the ashes and footprints of the old Imperial Palace.

The Palace was redesigned from the ground up, with the only limiting principle being that it be identical, from the outside, to the former Imperial Palace. The First Order Corps of Imperial Engineers incorporated new technologies and lessons learned from the Sack of Dosuun to build a structure more resilient, more durable, more secure, and more efficient. The structure was funded in large part by Natasi Fortan’s personal fortune; it forms the lion’s share of the Crown Estate, the properties owned not by the First Order nor by any individual but by the entity of the Crown, embodied by the current Supreme Leader. The furnishing of the interior spaces has been more or less completed, though adjustments are being made as staffing needs demand.
[ S U P R E M E ]​ Well done! It seems that you've crossed all your T's and dotted the I's - Nothing to say but enjoy! [Approved]