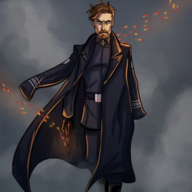 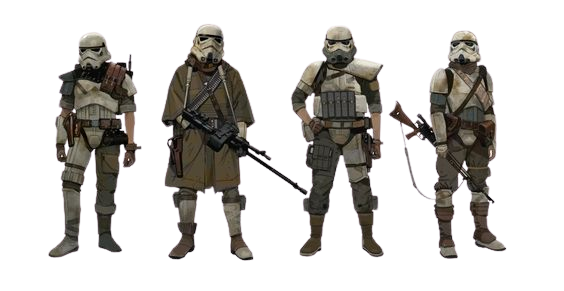 GENERAL INFORMATION
COMBAT INFORMATION:
Strengths:
Weaknesses:
HISTORICAL INFORMATION
With the formal founding of the Dvar Imperial Remnant sometime after the ex-First Order citizens landed on Dvar came the need for a reorganised military branch. The soldiers that accompanied the refugees came from various units and branches, some being part of the First Order Stormtrooper Corps, others of the Naval Commandos, etc. Admiral Cestius merged all combat forces into one, cohesive structure, deemed the Dvar Stormtrooper Corps, harkening back to the elite shock troopers of the First Order.

Because of equipment shortage, the Dvar Stormtroopers were not able to keep a uniform look, and the Remnant was forced to cannibalise leftover pieces of equipment from New Massada, giving to the Stormtroopers a rag-tag look, and also creating technical and logistical nightmares for the administration to deal with. These problems would not be the Remnant's main focus, however, as combat-capable men were too few in numbers to create anything bigger than a company. Thus, the Dvar Stormtroopers first served as a security detail force for propagandists of the Remnant who began roaming Dvar City, in hopes of attracting more people to their faction, by promising them a brighter future. This angered the Town Gangs and the Smugglers, who attempted to retaliate with force, setting the stage for the first battle of the Dvar Stormtroopers, where the grizzled veterans of the First Order wars easily overcame the various factions trying to crush them.

This victory proved pivotal for the Dvar Imperial Remnant, as more and more inhabitants of Dvar City flocked to the Imperial banner, allowing for significant growth in numbers. The Dvar Stormtroopers were then reorganised, with First Order veterans serving as the cadre for the new recruits to fit in. With each squad being led by a veteran, the structure of the Corps was in good shape, providing quantity over quality, but not losing sight of the latter. As such, the Dvar Imperial Remnant was quickly able to garrison New Massada and use the numbers of the Dvar Stormtroopers to start exerting influence over Dvar City once again.
Last edited: Aug 12, 2022 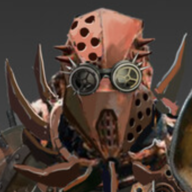 Just a couple of things to fix here.

I edited the affiliation as you asked.

Regarding equipment, and given the rag-tag nature of the Corps, I intended to list various guns and armours with which the Stormtroopers would be equipped, with no sense of uniformity. The fact is this unit would be seen using a great amount of different weapons and pieces of armour, rather than all be equipped to the teeth with every weapon listed.
Do you confirm you want me to reduce the list to reflect the equipment of a generic Stormtrooper, or can I keep that extensive list ?

If that is the goal, I would add some manner of description to the Equipment section. Note that equipment is not standardized, and troopers carry one of the following weapons, plus maybe a standard sidearm.

That said, as a haphazard list of things that any individual trooper may carry, this list doesn't make a lot of sense for several reasons. Some of these weapons are standard blaster rifles. Others are repeaters. Others are more sniper style. Others are big, bulky heavy weapons. All of them have different effective ranges and best uses, so a squad with a total mishmash of them would be pretty ineffective as a group. Many of them use different types of ammunition, which is a colossal headache for your quartermasters.

For that matter, how are these weapons issued to the troops? Do they line up for muster and get handed a weapon completely at random? "Here's a sniper-style disruptor rifle for you. Here's an up-close scatter blaster for you. And here's your missile launcher. It's just what was in the pile today, we didn't sort them. They all take different ammo and have wildly different ranges, so good luck. You're a squad now, figure it out."

For armor, this is even more confusing. Is First Order stormtrooper armor and old Empire stormtrooper armor just handed out at random? If this is a First Order remnant unit, why do they have a different kind of stormtrooper armor than the First Order armor? Having two different armor types randomly mixed together in squads is bound to lead to battlefield confusion. I'd really recommend sticking to one unless the feel you want here is "totally ramshackle unit dressed in whatever could be scavenged today".

Going for that feel of totally ramshackle unit is indeed what I'm looking to achieve with that sub. I added a small description to the equipment section, I hope it's good enough!