Tech Chaos By The Numbers 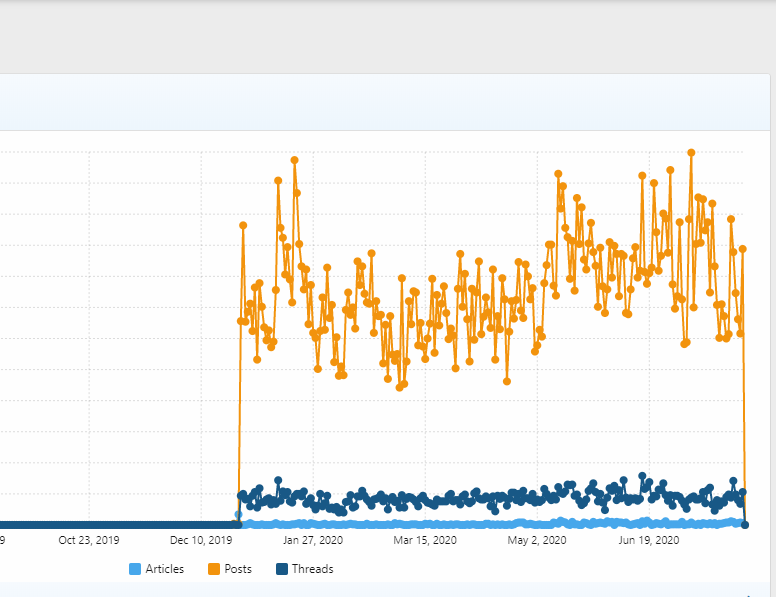 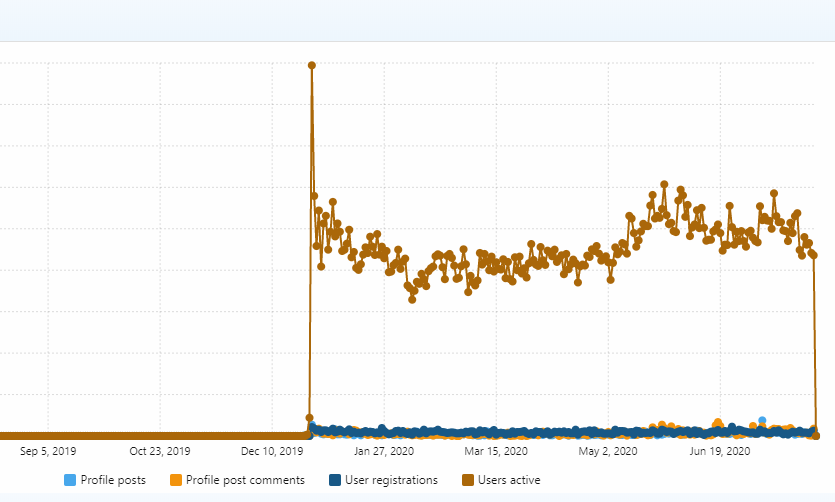 2. The first half of the year, which we only have data for currently, is usually presumed to be the weakest. Summer wrecks the numbers - but there have been exceptions, this may have been one of them.

3. You can see COVID's impact, but as discussed in private with those who were interested in this data - it makes it very hard to make assumptions based on the data, especially since the community-coined term "Invasion Season" happened recently.

4. User registrations are the most solid data to go by, and seems to be holding steady. It's lower, on average, but holds around the same as the "Golden Era", I think.

5. Active users is very hard to judge, but here's what I know - routinely, for whatever reason, we get attacked via DDOS'd around the New Year. That explains the absurd high point - but this time, the forum seems to have weathered it pretty well. I'd trust the lower numbers than the "one day highs", and even then I'd probably divide by a factor of 8 to learn our true numbers versus bots invading us.

1. There's a lot to be optimistic here. Rising during the summer, on average, is rare based in my experience. We seem to be doing just that - but I attribute some of the crazy lows and highs to COVID and the "Invasion Season". Posts and thread counts /day are the best metric to follow for this - users active is incredibly misleading and should be all but thrown out.

2. General decline was inevitable, especially with the median age of the forum, the upgrade, and recent shakeups in the past few years involving the forum's degraded software pre-upgrade, Chronicles RP splitting off and taking quite a few members with it, and Rise of Skywalker being altogether a sad wreck of a - okay, I'll stop.

3. Stability in our daily lives was the best metric by far of anything to recognize and judge numbers by. Major events of the year, like schools starting, federal holidays, the transitioning of seasons, and the turn of the New Year have always been the best methods to judge activity. The pandemic has thrown a lot of that out of the window - so it's hard to tell where we'll be at in a year. Stability is the biggest thing we can hope for, as we no longer have the "honeymoon phase" or the appeal of a brand new forum that the "Golden Era" had to fuel it's activity. We do have, however, the Upgrade and all the features it's brought to help fuel this new era we're in, as well as continued advertising and Mandalorian Season 2 coming out in the Fall.

It'll be fun to see where we're at in a year. Character Bio
Always cool to see the numbers to put things into perspective.

It's Better If You Don't Ask The Wrath of Achilles | The N&Z Corporation | The Zweihander Union​ Character Bio
in terms of general activity I can honestly say this is at the higher end of overal text-based roleplaying rpg's, which shows there is still a great deal of interest in this medium of creative expression and as a bonus, it shows that accross the years, Chaos must've certainly done its job right XD Character Bio
Question, what are the thoughts on why COVID-19's appearance reducing numbers in any sense? Has I have stated before, you'd think being told to stay home would increase the numbers right?

I dont want to point fingers, nor come off as a jerk, but I can understand not having a job or...well income being one of the reasons, but with America, there was some help to give income in some sense to people staying home, and or without jobs during this.

And on the DDOS'ing. I just recently learned what exactly that is.
Why do you believe this happens? Is this something that happens almost every New Years since Chaos' birth? Or shortly after it's birth? Doesn't this mean there is still someone out there with enough connections to do some form of damage to Chaos for the short term of concept? Does migration have any new protections and benefits against such things?
​ Romeo Sin said:
I dont want to point fingers, nor come off as a jerk, but I can understand not having a job or...well income being one of the reasons, but with America, there was some help to give income in some sense to people staying home, and or without jobs during this.
Click to expand...

Oh Romeo, Romeo. Wherefore art thou Romeo.
Deny thy father and refuse thy name.
Or if thou wilt not, figure it out buddy. Character Bio
I actually have worked more hours this year during summer than I have ever worked in the last 14 years, on average per week. From ~32 hours/wk during summer to ~49 hours/wk.

Yes, a lot of people got told to stay home, but people who had jobs in "essential" businesses were inversely effected. Character Bio
Interesting, so I came it at the right time to start role playing again. Nice Haha.

Ginger With A Gun Darth Alekto stated, those who were considered essential were required to stay in their job field, and in many cases, perform more hours. Meaning less time available. Secondly, if you don't have a job, then your job is to find one. Any kind of job coach or job aid program out there will tell you that if you are unemployed, then your "job" now becomes finding one. Because those checks the government handed out, are not a hell of a lot of money in the grand scheme of things. That 2 grand check I got? Yeah. I went through it in a month because of vet bills, insurance bills, vehicle bills, and groceries. It was gone that same month.

Just because they say you have to stay home, according to their recommendations, doesn't mean people are. it also doesn't mean they are not working. A bunch of office based companies made their employees take home their work and continue to work from home. You also have teachers who are still teaching classes to catch students up. Summer school numbers skyrocketed this year due to Corona, and all of it is being done Online.

"Being home" doesn't exactly translate to "Free time to play."

Sure there might be some people who got more time to come onto the site, or look online for something. But in all truth, after Corona hit, I have been having less time to come to Chaos in the past couple months than I have in the past year or two. All because of my living situation, and with being in the military, we are considered essential workers. In fact, the deadlines that the military wanted stuff done, is still required there, and very few were told that they could have it done by a later date.

The system is still attempting to move despite what is going on, and because of the added stress of RL. some people may want to take a break from whatever stress that could be built up here, and are instead doing something else.

Seeing a huge dip in activity is what I expected, and its what is shown. However it is rising ever so slightly due to massive problems being solved, or better dealing with them, I don't expect our numbers to climb extremely fast. Maybe stay level, or climb in small spurts of activity.

Character Bio
test
You must log in or register to reply here.

SWRP Chaos: Attack of the Purple
2

Staff Begun, The Silver Age Of Chaos Has
2