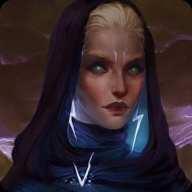 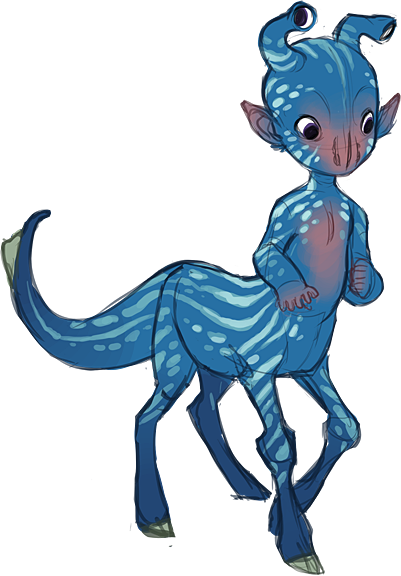 The Zaathri are native to the planet Zaathru; they are the originators of the planet's name.

It is believed that the Zaathri are descended from those who built the vast desert complexes and strange technology which fill the ancient ruins that dot their homeworld. But following a great cataclysm, their civilization crumbled and they were reduced to a much more primitive state.

The majority of Zaathri live in small, isolated flocks. Those that have been enslaved live alongside the Shaal, and may have more in common with their enslavers in terms of lifestyle and culture.
Last edited: Nov 21, 2022

This hurts my heart because I love Animorphs at much as the next person but these creatures are nearly identical to Andalites. I know it can be hard to differentiate them when you're using art from the Fandom but you'll need to go back to the drawing board and switch them up quite a bit.

I did note a few minor differences such as their blood and being more primitive, but, it's still waaaay too on the nose. A lot of the descriptions are the same, seeing in different spectrums, and even using sign language to speak. (That was how Andalites started speaking before they developed thought speak.)

If you think you can make changes in a timely fashion I'll leave it here for you to work on. If not, no rush, I can move it up the Pre-Codex so you can work on it when you have time. You'd just need to re-post it when ready.

Just let me know how you want to proceed.

This species concept was rejected when I attempted to sub it two years ago for the same reasons you've given. Since then I have extensively reworked the sub in an attempt to satisfy the rules, and at this point I do not think it is possible to make more alterations while still using the same art. I would rather not sub a species without art, nor do I want to try and find another image. I based the description of the species around these two pieces of art.

I don't know what else to do here. I wrote these descriptions myself. I did not copy-paste them from the Andalite wiki page. The fact that the wording is similar is because I am using Andalite art, and so my physical descriptions will inevitably sound at least somewhat similar. Telepathy is found in many different sci-fi universes, including SW, so it's not unique to Animorphs (maybe the term "thought speak" could be considered unique to Animorphs, but this sub doesn't use that term). I did remove the reference to their having a wider spectrum of vision, as per your request.

I am open to suggestions regarding how to proceed.

As I mentioned - I do recognize the attempt to add a little flavor, but at its core, this is an Andalite transported to Star Wars and it's still way too on the nose. It breaks into crossover territory fairly blatantly and we don't allow that. It's being held up for the same reasons that it was before.

How to go about switching things up?

Try reaching outside the "Animorph" or "Andalite" frame of mind. Forget what you know to be true about them from the series and pull on some of the strange and wonderful things from Star Wars.

Instead of referring to them as a "herd" choose something else.
Instead of having them eat through their hooves, perhaps, they do have a mouth but it seals shut when they aren't eating and you can't see it. Or perhaps they absorb nutrients passively through microbes in the air, through their skin.
Instead of having their vision be identical to Animorphs choose something different, or, remove the extra sensory aspects altogether.
Perhaps instead of communicating via telepathy and sign language, they do so by manipulating gravitational waves or sound waves.
Click to expand...

These are just a few random examples but when you're designing a species the sky is the limit save for a few small items such as "no immortality" which isn't even an issue here. Don't let the artwork confine you into the box that it came from. If you do - You're going to keep running into the same problem.

It would be cool to have a species that look like these guys. I'm not complaining about that. Big fan, here. But whether I like them or not is irrelevant because they've GOT to be their own thing to maintain the spirit of Star Wars. Not Animorphs. The words may not be taken as a direct rip from any source, in the same order, but I can easily recognize A LOT of the phrases used to describe them. When you're looking at an alien species that only appears in one other place...Those descriptions, biology, and function really stand out.

I hope that helps! Please do let me know if you'd like me to leave it here or move it to the Pre-Codex.

Leave it here, please. I will begin editing in the morning.

I have made the following edits:

I have made the following edits:

This is a good start.

The examples I provided were really only that; Examples. You didn't have to go that route if you didn't want to when really, we just need these guys to differentiate from the source material enough that they can stand on their own. If I compare the base description, distinctions, etc, there is still way too much crossover. A lot of the information matches, it's just been moved around. We can't just port their likeness in and call it a day.

- The basis of starting with "sign language" and some utilizing telepathy. It does exist in Star Wars, obviously, but it doesn't help you to differentiate the species by carrying over the same traits in the same manner. (By and large, this is probably the thing that stands out the most because it's so prevalent.)


From Your Submission: ​
From the Wiki/Fandom Pages: ​
- The "blue fur" coloring.

- Calling them a "herd" or referencing "tribes" because the Wiki does the same thing. They started as a herd, became a tribe.

- Bladed Tails. Switching around the words from "Tail Blade" to "Bladed Tail" isn't really changing anything. Yes, the art has them. But the descriptions and usage are VERY close.


From Your submission: ​
From the Wiki/Fandom Pages: ​
- Belief System. Perhaps, this could be alleviated with a little elaborating but this is also very close to what Andalites do.


From Your Submission: ​
From the Wiki/Fandom Pages: ​
These are some of the things you're going to want to look at. The devil is in the details and while I'm accepting of some similarities (calling them centaur-like, etc) you'll need to adjust just a little bit more. I hope breaking it down like this helps explain it better.
Last edited: Nov 21, 2022

This is much better. Again, though, I was just giving you examples of the things that could be altered to try and help out. Not that you had to change it all or only choose particular things.

Food for Thought: In general...There will always be "some" carryover between cultures and species. It's just the way it is. But, when so much of it exists in the same place, in the same way, that becomes suspect. The "rituals and prayers" wouldn't even be on the table were it not something that the Wiki pointed out, specifically, and in turn, your submission followed suit. It was the same thing with telepathy, etc, and all the rest of the distinctions that matched an existing source. It is the combination of these items. Each one if looked at singularly or on its own wouldn't raise a brow at all.

I don't know about you but "Mood Fur" sounds way cooler anyway. Nice addition. The rest of it checks out. You should be quite proud of yourself because you've done solid work.

I think we can move forward now, but please, in the future try and keep this in mind. I don't want to hold up your submissions (or anyone else's) for any longer than necessary. Thanks for your patience and understanding.