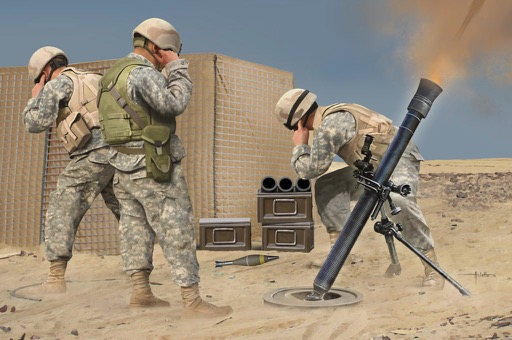 A Torun mortar being adjusted for elevation

PRODUCTION INFORMATION
TECHNICAL SPECIFICATIONS
SPECIAL FEATURES
Strengths:
Weaknesses :
DESCRIPTION
It became apparent on Dagobah that the Jairdain heavy mortar, while effective against massed soft targets, was often cumbersome to maneuver, and, much to Jessica's dismay, administrative wrangling delayed its testing and entry in service. In an attempt to increase the firing rate, the 81mm Torun was instead fitted with a breech-loading mechanism, unlike the muzzle-loaded Jairdain, while retaining all of the same electronic equipment, but it was only marginally successful in enhancing firing rates. It is typically carried around in a hoversled that allows to carry thirty-five rounds whose payload is powerful enough to have the firepower of a conventional proton rocket. It can quickly be set up on the field, in about 20 seconds. The Torun is a crew-served weapon, requiring a crew of two to properly man without the autoloader. As with all mortars, there is a range under which the Torun cannot hit; for this reason, it requires other support elements to be fully effective. In addition, standard high explosive or ion rounds have the most effectiveness within 5m of the detonation point, with a blast radius extending up to 35m from the detonation point.

Depending on the range of the target, the crew can choose whether or not to affix augmentation rings on the shell, which mostly contains additional propellant for the shell: with each additional augmentation ring, the shell's range increases but this goes both ways: the minimum and the maximum effective ranges are affected by the addition of augmentation rings. Without an augmentation ring, the mortar's effective range can range from 75m to 450m, whereas with all five rings affixed, the mortar can hit targets from 1.5km to 6km away. Also, given the flight time, it is easy for mortars to miss small or mobile targets and hence must be preferrably used against massed targets, large targets or against immobile targets such as fortifications.