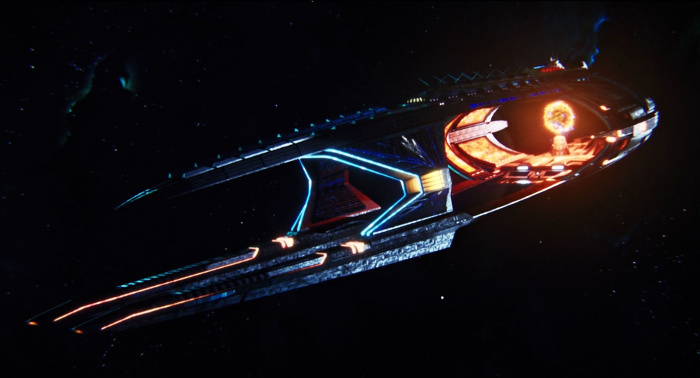 Overmind: The Ark Divinus is directly overseen by the Overmind, a powerful emergent AI housed in a central supercomputer on the battlecruiser's bridge. Capable not only of comparable strategic analysis to most biologic NPCs, the Overmind functions not only as the ship's commander but effectively its entire bridge crew. While a small support team is required for maintenance and certain secondary systems, the emergent super tactical droid effectively automates most command level functions.

Stellar Core: The Ark Divinus is equipped with a Charon-series Stellar Fusion Core which simulates the effects of stellar fusion on a miniaturized and thus containable scale. Suspended at the heart of a large reaction chamber, massive amounts of energy are siphoned off from the artificial star's chemical processes for use in powering the battlecruiser's systems far more efficiently than standard cold fusion.

Central Control Computer: Not far from the bridge is the vessel's central core, which allows it to instantly relay information and orders from droid to droid across an entire planetary body. Normally this is used to assist its drone squadrons in more efficient use of tactics, but should the situation call for it the Divinus' hangar can be loaded up with troop transports instead and function much like a Separatist era Lucrehulk.

Molecular Shields: A special form of deflector technology, absorbing energy fire instead of deflecting or neutralizing it so that it may be converted into powering the battlecruiser's own weapon systems. In addition to being more durable than standard capital grade shielding, this absorption process allows for the carrier to return fire even under reactor strain. Resistant to most short ranged weapons fire, a sustained barrage is the most effective method of attack, although the deflectors are more vulnerable to heavier hitting weaponry like heavy turbolasers or energy torpedoes. They are, however, ineffective against physical projectiles such as HVCs and concussion missiles. A backup particle deflector provides some kinetic resistances, but is not as durable as the molecular shielding.

Stellar Observatory: While the primary purpose of the Divine-class is system defense and combat patrol, like all larger Mechanicum vessels at least some space is reserved for research that might further the machine cult's overall objective of scientific exploration and discovery. Fine tuned sensors are designed to assist their operators in mapping spatial anomalies and other stellar phenomenon with exquisite detail.

HIMS: Equipped with a hyperwave inertial momentum sustainer, this system is designed to allow the battlecruiser to counteract an interdiction field. While not effective at escaping from inside gravity well fields, the HIMS produces a static hyperspace 'bubble' which can sustain the ship's presence in hyperspace while it is propelled along by its own forward momentum. This is sufficient to pass through nearly any interdiction field save for those of unnatural size.

"You may say, it is impossible for a man to become like the Machine.​
And I would reply, that only the smallest mind strives to comprehend its limits."​
- Dark Adeptus​
​
The Ark Divinus is the most impressive starship yet produced by Mechanicum shipyards. Constructed in the heart of the Void Forge and overseen by the Chief Hierarchitect himself, it is the only vessel of its class. A four kilometer long battlecruiser, the Divinus functions as a command and control carrier with lethal armament which can be utilized in capital to capital engagements.

Like most Mechanicum designs, the Divine-class relies heavily on high tech molecular shielding and exotic mostly plasma based weaponry. Pulse-wave and gauss cannons comprise most of its emplacements, but there are also emplacements for plasma railguns and torpedo launchers for less conventional warfare.

In place of standard ion technology, organic tech known as a bio-energy array allows the battlecruiser to cannibalize its own shield strength to drain the shielding of nearby hostiles in close proximity. Perhaps the most conventional armament at its disposal is the Divinus' point-defense laser system which gives the ship good coverage against attack waves of small craft in addition to providing cover for drone launches from the carrier's massive hangar bays.

A rare and powerful Charon-series stellar fusion core allows the battlecruiser to run most systems in tandem at full power for brief periods, but perhaps the most impressive part of the ship is its 'bridge crew'. Like all Mechanicum vessels, the entire warship is run entirely by a single advanced tactical droid brain at the command level. This particular supercomputer is known as the Overmind, an early prototype Warmind-series super tactical droid which has somehow managed to exceed its programming limitations and develop a limited form of sentience.

Not far from the bridge is the vessel's central control computer, refurbished Separatist era technology which interfaces directly with the Overmind and allows it to relay intel and orders to Mechanicum units across an entire planet instantaneously. Most Mechanicum models possess their own independent droid brains, but destroying this control core would severely diminish all nearby units' combat efficiency and interfere with the swarm tactics employed by Mechanicum fighter drones.

In times of war and crisis, the Ark Divinus serves as command vessel for all Mechanicum forces. On a day to day bais, this battlecruiser and its Overmind are currently on loan to Storm Fleet, an elite task force within the Confederate Navy. 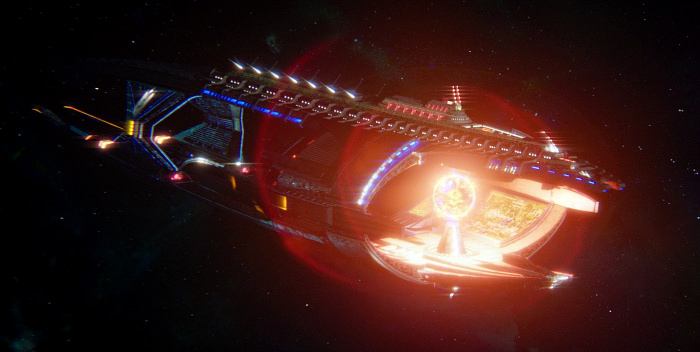 At this time, however, I cannot approve submissions that have two or more restricted materials in them (Impervium & the Overmind AI).

Woops, wasn't thinking of the AI in terms of its status as a restricted mat. Swapped out impervium for quadanium.