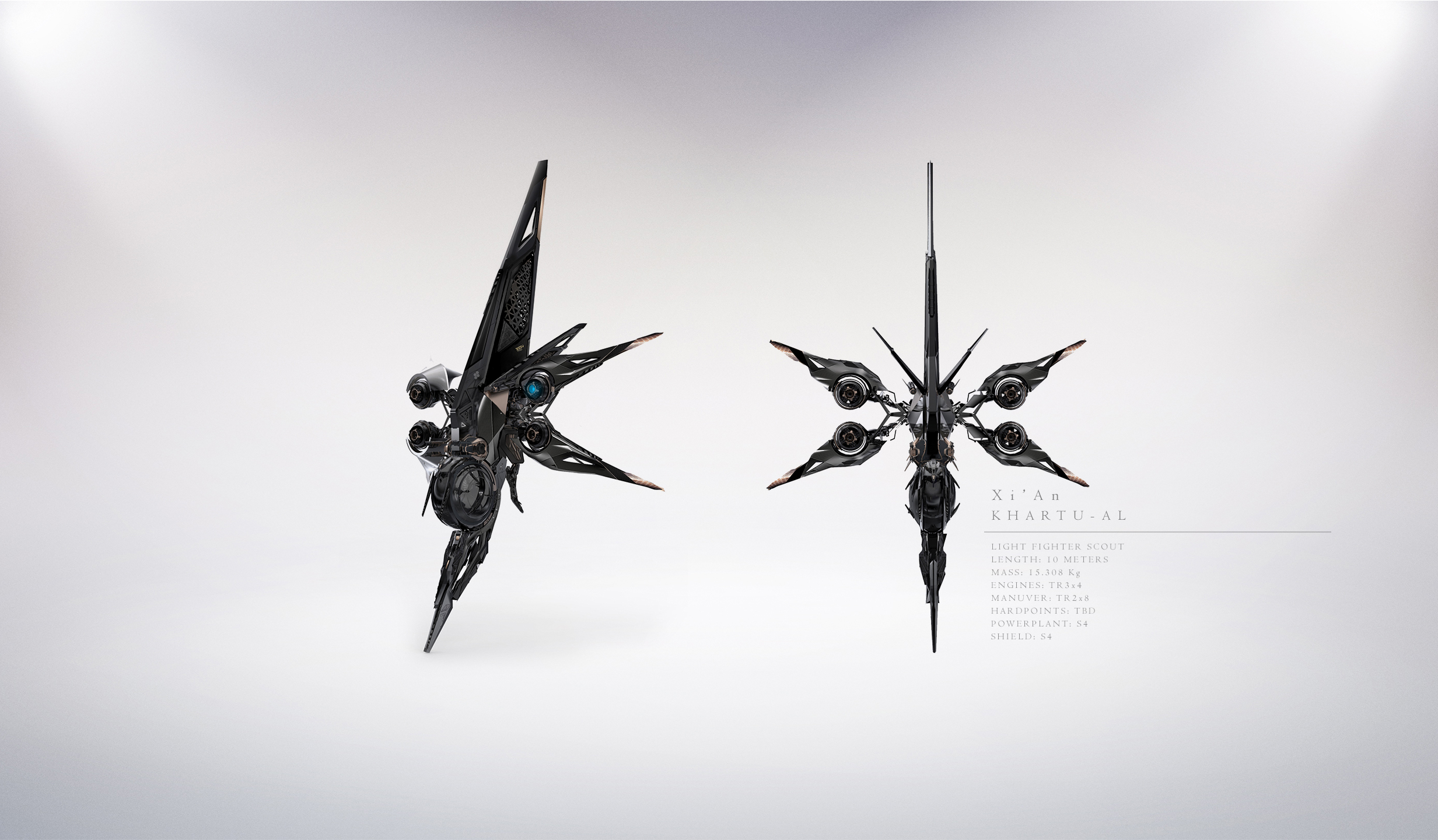 Strengths:
Weaknesses:
Description: Developed alongside the Katarina, Tenebrae squadron provides the ship with a highly effective fighter screen and attack force that compliments the frigate's speed and stealth capabilities. Originally based on ancient designs of the Virago, Domino incorporated several concept designs that were never produced into its development until the only vestigial remains of the Virago were the four adjustable wings and weapon targeting philosophy.

Positioned on gimbals, the two ship-grade pulse cannons automatically adjust their fire convergence and can track targets across a wide vertical arc relative to the ship's upright position. To the rear is situated a seismic charge dispenser with a trio of warheads that blast in a sphere instead of a single plane. This gives each detonation reduced range but increases their effectiveness against pursuing ships. Forward, the fighters mount only a single proton torpedo launcher above the guns. It's fed off a dual-feed magazine that allows the pilot to choose between two pre-selected torpedo types, for four of each or eight of a single type, and is capable of providing the ship its only non-lethal armament.

Thrust is provided by four drive engines that, contrary to traditional fixed engines, are fully capable of independent movement themselves, and as the wing they're housed in adjusts during flight. This allows them to point in nearly any direction letting the Tenebrae whip about in unexpected ways with lightning agility while almost bestowing a living appearance to the ship as the wings flex and flare out, or contract to adjust the ship's center-mass or to affect aerodynamics during planetary flight. The resulting g-forces of such maneuvers required pilots not only to wear g-suits to prevent black outs, but also to dial their inertial compensators up above where they would normally be situated. Each engine is powered by its own fuel-cell housed in their respective wings while the rest of the ship is powered by a fifth.

In order to cut the fighter's mass to persevere speed, carbon-fiber laminated titanium was used as a frame over which plasteel bonded carbon-fiber was stretched to form the hull. Unfortunately this resulted in an almost complete lack of armoring capable of standing up to even a standard infantry blaster. The hull is coated in nightshadow to assist avoiding detection but, since the engines couldn't be fitted with any additional baffling as it'd block their movement rigs, tibannaX had to be used to mask their drive trail. The fighter's "mast" contains a gravitic modulator and thermal dissipator to complete the stealth suite. However, this renders them without any active countermeasures to detection.

Pilot comfort for longer than average missions was taken into account and the fighter's pilot seat contains several massage functions and sits on a mini fridge. The bubble cockpit gives the pilot a 'floating in space' experience while incorporating enhanced augmented reality overlays to assist in target tracking and situational awareness. Add in that the ship was built around the pilot using a VT-Nerve Helm, and a Tenenbrae should react as if it were an extension of the pilot, merging the two into one.

This needs to be hyperlinked.

You're also up by 5 ratings. The two lows and the limited production balance out the extreme maneuverability rating, but the very high (+3), fast (+1), and high (+2) set you over. I'll accept your weakness as significant enough to knock one of those (6) off, leaving you at 5 over.

Character Bio
Ok, bear with me a bit, I haven't subbed a ship in maybe two years.

Dropped the armament and hyperdrive to average and added a weakness.

Where does that leave us?
[member="Lily Kuhn"]

Character Bio
[member="Domino"]
You're still one rating over, if we take the additional weakness into consideration. We've got an Excel sheet that lets you plug in ratings, production, and the size of the ship in question in order to see if something is balanced or not (prior to taking strengths & weaknesses & advanced systems into consideration). You can find this at the bottom of our starship template page.

My suggestion would be to change the defense rating to very low, as you've stated the ship has light shields and no armored hull plating. Do that and I'll approve it.

Character Bio
Done, thank you for your help. As an aside, how does extensive development work (dev threads/supporting submissions) factor into the rating system now? I know there aren't requirement challenges for restricted tech anymore, I'm just asking about honest effort.
[member="Lily Kuhn"]

We do not do development threads anymore. They have no bearing on submissions.