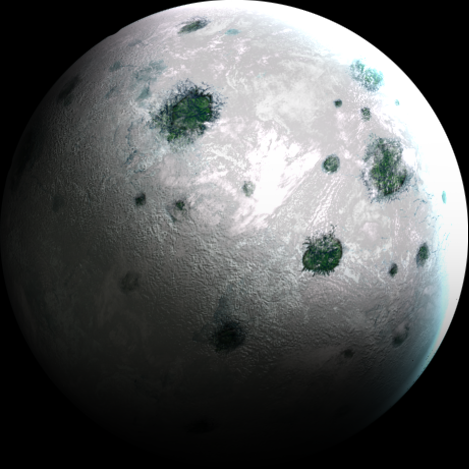 HISTORICAL INFORMATION
Discovered by the Rakata during the time of the Infinate Empire, it was settled and used as a prison and factory world. It was found to be rich on metals and other ores, and factories were built to make use of the metal. Prisoners were later brought to the world to be used as miners, or kept in underground prisons.


But unbeknownst to the Rakata, their extensive mining had altered the planets gravitational field, thus sending it further away from it’s sun. This caused most of the planet to freeze over. Still, the Rakata didn’t want to abandon their facilities, instead expanding on what they already had upwards in the forming ice, though some doubting Rakata began moving their technology away.


After the fall of the Eternal Empire, the planet was abandoned, and all technology was stripped away, and stayed that way for thousands of years. The occasional smuggler or explorer stumbled upon it, but payed no interest since it was frozen, and they had no interest in another Hoth or Ilum.


But sometime during the time of the Gulag Plague, parts of the planet began to thaw out. More presicely, the deep valleys. Explorers and treasure hunters rediscovered the world around the year 800ABY, and found in the biggest of the valleys the entrance to the underground tunnel-network. It didn’t take long before more treasure-seekers, as well as criminals, heard of this planet and came to see if the rumors were true. It didn’t take long before a city began to form in the biggest valley, called Karelak.

Even though it was treasure-hunters who rediscovered the planet, and settled it, the treasure they found was sparse. None of the technology from the time of the Rakata were left, so they only found old weapons used againt the Rakata, and other minor treasures. Still, the intrigue of the old facilities attracted a fair amount of treasure hunters, even with small chances of finding anything major.


But the planet, duo to it’s little known status to the bigger parts of the galaxy, was also a popular meeting-place for criminals, pirates and smugglers. After it’s discovery by one of the bigger crime-lords, a new valley became an area often used by the less-honorable people. After some time, these criminals established a town of their own, which the settlers of Karelak named Crime-Town.

As more and more wars were happening in the galaxy, refugees began coming to Stejurant. Given the limited space available in Karelak, a new town was made for the refugees, in one of the smaller thawed out valleys, called Ederykih.

In the recent years, it is mostly used as a haven for people who wants to escape from wars and the constant fighting in the galaxy.
Last edited: Jul 20, 2020

My apologies for your wait. I have only one comment.

Some casual fans may not be immediately familiar with those by mention, so I'd ask that you drop some links in here: Duros, Ithorian, Rodian.

Once that's done, I think you'll be ready for the second level review.

Character Bio
Should be fixed now, and no worries about the wait

Thank you for that edit. Approved, pending secondary.

I'll be handling your Secondary Approval - Let me get started!

1.) Unexploited Resources: You'll need to link the items below and specify what metal ores. It's all right if they haven't been found yet but we still need to know what they are.

Unexploited Resources: [ Does this planet have resources that are not yet utilized by the population? Common materials and ores should just be listed (Ex. Durasteel ore), while anything special or rare should be linked. ]
Click to expand...

2.) Planetary Features: Please be aware that Rakata Technology is on the banned items list. You state that it was once a "Weapons Facility" and we need to ensure that there is NO Rakatan Technology left to find. Please add that notation.

The planet was once used as a prison, slave center and weapons facility by the Rakatas of the Infinite Empire, and most of the structures from that time still stands on the planet, though most of it is underground.
Click to expand...

3.) Affiliation: I see the link for "The Star Cabal" at the top but it should be linked here for easy reference.

Affiliation: [ Does this planet fall under the rule of a certain person or faction? Company or group? Link any relevant characters, faction pages, or groups. ]
Click to expand...

4.) Wealth: You'll need to pick one rating. Either "Low" or "Medium" for the overall feel of the planet.

5.) History: You'll need to clarify some of the following.

Discovered by the Rakata during the time of the Infinate Empire, it was settled and used as a prison and factory world.
Click to expand...

You state that it is a "Prison or Factory" world here but in Planetary Features you stated "Prison and Factory" world. Which is it? Keep in mind that you cannot have ANY Rakatan Technology. This is important to clarify because you keep mentioning treasure seekers. What might they find if not Rakatan Tech?

6.) Spelling/Grammar: Please sweep the submission and double-check it for spelling errors. It doesn't need to be perfect but I noticed quite a few errors. Since you're going through to check the rest - It can't hurt to suggest it.

That's all - Thanks for reading.

Give me a tag when you're ready and I'll get you on your way.

[The Noble Nightingale]
You must log in or register to reply here.