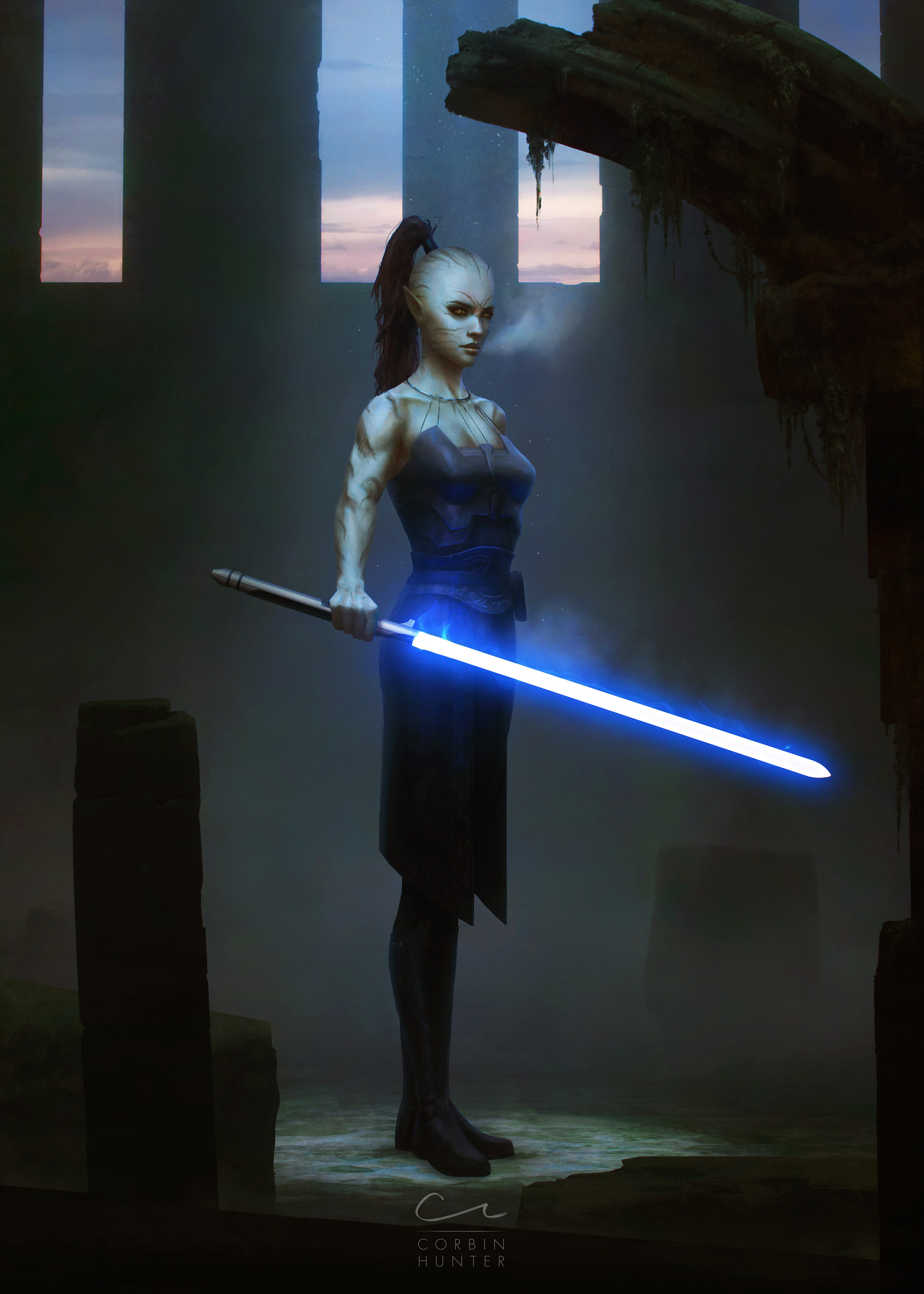 Living the life as a child, taken in and adopted by a Jedi Master, Jewel had a rough start. Father was not in the picture, with her mother attempting to do anything and everything possible to raise her child. However, it was difficult. Jewel still does not know if the reason she was handed over to her Jedi Mentor was because she could no longer care for her, or didn't want to take care of a child. While the idea for many years had haunt her dreams, it has now been a trivial matter where she has accepted her past.

Training under her mentor Arlon Derr'moth, Jewel did all she could to prove her worth to her mentor, and make sure that he didn't regret picking her up, and taking her under his wing. Training started at an early age. Starting at nine years, she was almost forced to believe all that the Jedi had implanted into her. Teaching the force, its ideologies and code that one should be a servant of the people, provide self-sacrifice to those who did or didn't deserve as such. While she always questioned these teachings privately, she never did so openly, or directly to her mentor. As like with any Cathar, she found it difficult to make friendships, or lasting relationships for anything more than acquaintances. However, it was a fateful encounter where upon her mentor Arlon was facing Vora in battle.

It was a personal matter. As the Sith Lord seemed to be hunting down the Jedi and finally found him. Brandishing a saber, Jewel attempted to prevent the Lord from fighting her mentor and likely her only friend, when the Jedi Master stepped forward to Vora's challenge.

This act of self-sacrifice was presented to the Cathar. Telling her to run, and to learn all that he could not teach her. So she did. Doing as she was commanded. While questioning if she should have stayed to help. The Masters of the force clashed in battle, which she did not see to its end, but only saw the start. The Sith Lord seemed to surround them with a power unlike she had ever seen before. The initial clash sent the Jedi Master on his back foot. She chose then to run. Obeying the last words of her only possible ally.

Running for what felt like kilometers, she finally stopped to catch her breath. Holding her saber tightly within the grasp, she turned around to face where she had come from. The drawing suspicion overcame her. She wanted to obey her commands, but couldn't. She defied the order like she had wanted to do so long. Coming closer, she could no longer sense the force of the Sith Lord. Drawing closer, she saw the destruction. Areas of the ground ripped up. Trees and flora ripped from the ground, or destroyed in the battle. She saw a Lightsaber on the ground. The one that belonged to her master. Slowly walking out into the clearing of carnage, she came upon the saber.

Reaching down, she felt its presence. Unsure of how it survived yet her master and the Sith were no where near it. However a voice broke over the silence.

"He fought with a strength I rarely see o'child mine."

Turning around, she saw the figure of the Sith. Damaged robes, and helmet scratched up and having a gash along the faceplate. Saber in hand, but off, and the body not to be found.

"What did you-"
"His mortal shell is no longer of this plane of existence."
"Why did you-"
"I have been tracking him for almost a year now. He killed some people who I had been working with. It was a personal matter."

Jewel could feel no deceit from the person who stood before her. Even as the Sith stood up and closed the distance with a saunter, she remained still. Not activating her saber. Questioning why this Sith was so much more powerful than her Master.

"You may continue to live as a Jedi, and go about your way. However, if you choose to follow the footsteps of your mentor, know that I am far from an easy fight in my current state."

She nodded her head. Picking up her mentors saber and tossing away her own. Igniting the blade and holding it ready for combat. About to fight him, she twirled the blade around before presenting it to the Sith.

"I want to learn. I want to understand."

Tears welled within her eyes, and dripped down her face. Going against everything. Suddenly turning to the aid and lessons of a Sith was wrong, but so many questions she had, she couldn't return knowing she had given up on her mentor. She couldn't return to the Jedi.

It has been years since then. Trained formerly as a Jedi and now under the lessons of the Sith Lord Vora Kaar, She took a new name becoming a Sith Blade. Reztezi Irus. Keeper of the Sith Code.
Last edited: Jul 27, 2020

Can this be moved to NPC Codex Forum please?

I'll be conducting this review for you. I have just a few minor notes and then I believe this will be ready to be stamped.

If these are N/A, please so state.

Dominate is a verb meaning have a commanding influence on; exercise control over. I believe the word that you intend here is dominant.

Please tag me when you have completed any edits.