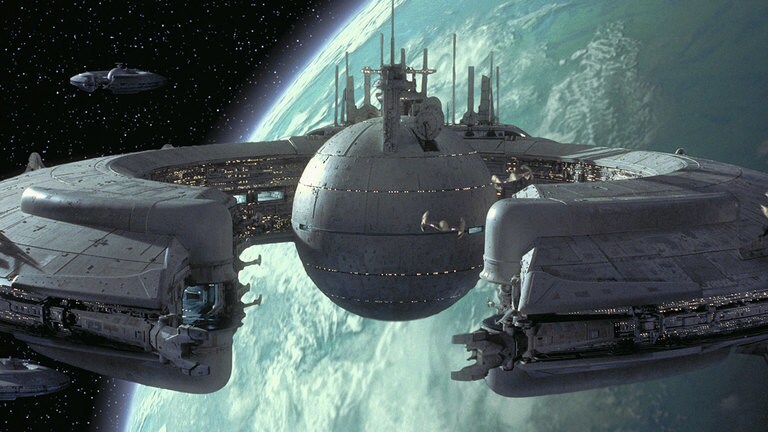 PRODUCTION INFORMATION
TECHNICAL SPECIFICATIONS
STANDARD FEATURES
ADVANCED FEATURES
STRENGTHS
WEAKNESSES
DESCRIPTION
CNS Orray, is an outdated Lucrehulk-Freighter, that has been renovated for use as a new project for use as and escort Craft for Diplomatic arrangements, and as a Logistic carrier for immediate needs for any Naval Conflict, as the ship can store repair materials and other useful items needed for the more Organic crews of various ships across CIS Space. With its main crew being all Droids the new program is using an upgraded OOM Unit, designated as SC-A1 (Special Commander Alpha 1) as the ships commander. After the conquest of Naboo and the massive refugee outbreak that happened, the Admiralty moved funds towards this OOM unit and the old ship to see how it fairs in practical use and need as the borders of CIS space grows. Primarily flying routes between Naboo, Geonosis, Kamino, and Hypori SC-A1​
​
Before we start, I will note that Canon starships don't need to be codified in the Factory to be used in RP.​
​
Anyway, there are a few fundamental issues to deal with before we can move on to the smaller details. I realize that you are attempting to mimic a Canon starship, but Combat Ships of this submission's length is only permitted at Limited Production, for a Major Faction, or Semi-Unique Production, for a Minor Faction/Company. Please lower the rating (or, for that matter, the ship's length) accordingly.​
​
Starships of this size also cannot be affiliated directly with your character, see the image linked above or the source.​
​
Moving on, please include the Hangar Rating, in this case High, not just the number. The vessel in general is also pretty underpowered, as this shows; if this is intentional due to it being in your own words "outdated", good for you - if not, you may raise a few at your discretion.​
​
Finally, I have to ask, is this meant to be Unique? The Description seems to refer to it as a singular vessel, namely the "CNS Orray"; if this is meant to be a singular, unmodified Lucrehulk I would actually suggest making use of the Codex Location template, keeping in mind that "The Codex Location template is not a work around for the Factory, and a ship with significant technological changes from a canon model will be directed there."​


Update on this? If you need any further assistance feel free to ask. I can give you a few more days if you need them; should you require more time to make the necessary edits, I can also move this back to Pre-Factory, which would give you around a month to work on it.​
​
If no response is received by the 28th of February, I will be archiving this submission for inactivity.​

Archived due to inactivity; should you wish to give it another go at a later date, you may request it moved to Pre-Factory here.