Born in the Storm 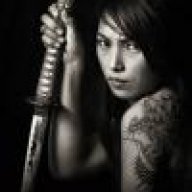 APPEARANCE: Shandian is, to her own mind at least, annoyingly petite in a galaxy where most beings seemed to easily top six feet. Despite this, she has trained consistently enough that her small frame is deceptively strong, and she is very, very quick. Grim and utilitarian would be an accurate description of Shandian. She does not enjoy the few times she is forced into the role of coy seductress, preferring to meet her enemy head on with a blade. Armour, not evening dresses, is her garb of choice. When she bothers with makeup, Shandian can be beautiful, but most of the time she does not, and while pretty, is not particularly stunning.

BIOGRAPHY: Shandian was born to an upper middle class family on Atrisia. The Leis were not the highest ranking family, but they were old and established. At least until Cyril Greyson came to the planet. When he unleashed his massive force storm in his mad crusade, the Leis were among the host of those who died that day, down to a the household servants, the single survivor was Shandian, who'd been off-planet in her final year of finishing school, which had included multiple intergalactic trips to learn about the other cultures and species she would be expected to deal with.

She came home to find she had nothing. Her family gone, her home in ruins, most of the families wealth save that in off-planet banks lost, it was all gone, all because of Greyson. There was nowhere to direct her rage however, as Greyson had consumed himself in his last devastating strike. Or so she'd thought. Until it eventually came to light that there was at least one more bearing the Greyson name, and doing so proudly, as though it was not a blight upon the galaxy. Cedric Greyson, son of Cyril. Why should Cyrils family get to live and prosper when her own did not? It would not do. Shandian swore to destroy Cedric and everything he cared for. Those he loved would be slaughtered. Anything he built would be destroyed. He would have nothing, and then he would die.

To accomplish this, Shandian joined the Sith Empire, and dedicated herself to mastering the Dark Side. It would furnish her with the revenge she sought.

Character Bio
looks interesting
You must log in or register to reply here.