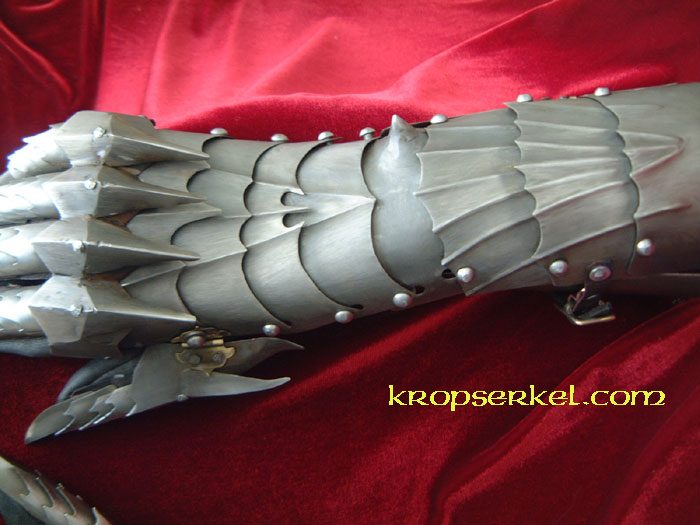 Intent: To enhance a skill that Valashu has some skills in, but not nearly as much as he would like...
Development Thread: $$$$
Manufacturer: Crassus
Model: Gauntlet of Crassus
Affiliation: Valashu Elahad
Modularity: n/a
Production: Unique

Strengths: Weaknesses:
Description: Valashu managed to find information not long ago, information of a little known venture even during time of relevancy. Now, many centuries later, it was so unknown, he had to verify. The information? That once was a Sith from Nantucket... wait no, there once was a Sith known as Crassus, one bent on the same things as most: power.

In his meddling with Alchemy, the powerful Sith Lord managed to craft a Gauntlet rumored to not only empower ones grip, which in itself was useful to the Nth degree, but to also bolster ones Telekinetic abilities tenfold. He tested it on many a being it is said, satisfied that in the long run, nothing like it had been made before. Nor since it seemed.

Flash forward to present, Valashu attempted to find it within the Tomb of Crassus, simply to find he was moments late. Tracking a clumsy thief, he hardly missed him when he fled to space. Continuing the venture of tracking, he noted that he landed and moved to an encampment. Following in these footsteps, he stumbled into a fling of the past.

Together he and she killed a dozen and more guards before infiltrating the compound. The mission was successful. He managed to find it. However, he then came to understand the difference of what had been said through legend, to what was real. While it may seem to make one more powerful, it did not, in any way one could infer of these words. Rather the effect was simpler: it made the concentration and energy required to do some thing with telekinesis easier. One whom struggled to lift a chair before, could do so off handed while conversing with another, etcetera.

The downsides though were notable: while in use, or simply worn, a person became a beacon, those using the force would sense them as if face to face in spite of obstacles between them. As well, it has a malicious bond with its user, slowly driving them to perform horrendous acts, whispering to them of evil that should be performed.

Been thinking, and I wanted to note:

No, a great portion of what this sub is does not adhere to the entirety of the canon item. The basics is there, however an item able to be so powerful, with no downsides? It is not capable of being used properly on site. So I added several downsides, and removed the grip as well, alongside taking away the mention of empowering tenfold as this in itself could be noted as a battery of sorts.

With all the changes, it is a powerful tool able to hone, but not provide more energy reserves, with some notable downsides.
Vuldak | Gauntlet | Armor | Bow & Quiver | Shard of Retaliation

I think you've done a good job of balancing this out. So you have my pending.
How 2 Spacer Trash​