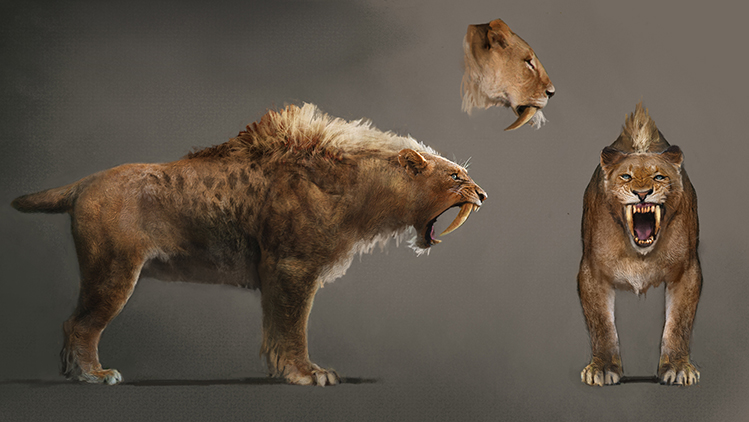 OUT OF CHARACTER INFORMATION
GENERAL INFORMATION
PHYSICAL INFORMATION
Strengths:
Weaknesses:
CULTURE
HISTORICAL INFORMATION
Another big cat and a direct competitor to the noble lions inhabiting the fields to the west, the dreaded Frír are almost the exact opposite in terms of general behaviour. Sabre-tooths, as they are more commonly known as, forever stalk the forests and tundras in search of another meal, regardless of what creature they may come across. They have very little social life, only occasionally banding together with rivals in order to fell prey too large for just one sabre-tooth. Then once the hunt is over, they'll go right back to fighting amongst themselves for the take.

Since the dawn of recorded history Frír have ever tormented the Valkyri people, having earned a nasty reputation of devouring easy prey in the form of children, and will attack anyone they come across at first sight. Only once completely outnumbered will the beast attempt an escape; failing that however, the cornered cat will fight to the death by lashing out with their strong paws and lunging with fangs powerful enough to break bone and cut through chainmail alike. Their belligerent behaviour has only earnt them a deep-sated hatred in the hearts of the Valkyri; animal wranglers and farmers especially.

Frír are known to fear only one thing, and it is neither man nor beast, but fire.

According to ancient myths, mankind was given the element of fire from the Trickster God Velkar despite the Allfather Himself forbidding any such gift. The Trickster God disobeyed his father, but only so that he may laugh as the foolish mortals struggle to contain this new powerful element. In the end, the Valkyri succeeded in harnessing the power of fire for their own use, thus thwarting the Trickster's plan to sabotage his father's precious mortals. Even so, Velkar is still worshipped to this day as he who brought unto mankind a most crucial tool with which to survive, as well as a cunning weapon to use against their enemies. There are some who even claim that Velkar's true intent was to indeed empower mortals, since his father would not.
Last edited: Apr 11, 2021