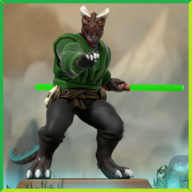 [*]Ever increasing mastery of the Double-bladed light saber forms:

[*]Phantoms of his past:

APPEARANCE:
Dar’rak’s Head is covered in deep brown scales that transition to a blackish-blue color at the shoulders and down the rest of his body as well as both of his arms and legs and along his tail. His chest is covered in lighter grayish-blue scales that can also be found on his palms.

Dar’rak sports several horns out the top of his head, the outer two are thicker and longer than the smaller two found on the inside. All four of them have blunted round tips. Dar’rak has a set of modified spiked scales that come out just under each of his bright yellow eyes in a string of 6 that start from the outside of each eye and circle around to the inside just before his thick snout. Three additional spiked scales along his brow can be seen that are slightly longer than the ones under his eyes and come to points. Finishing off his face are a set of three thick spiked scales on the back of each side of his jaw line that end in an additional blunted spike below either side of his chin. Dar’rak’s Snout has on it two large nostrils and on his left check can be seen a scar that consists of three gashes that run parallel to each other. On each of his clawed hands Dar’rak has a studded scale over the joints at the base of each of his fingers. Dar’rak’s tail is long and thick, extending to over three feet from base to tip.

Dar’rak chooses to dress himself in the typical Jedi style robes and gear, however not in the typical color of brown and tan. Instead his Tunic or shirt has been modified and is Dark green covered in layers of saber reflecting scales to better protect him in light saber combat. His belt is mud brown and studded ending with black pants and boots. On one side of his hip you can notice two single hilt sabers and on the other is his double-bladed one. Dar’rak occasionally also carries with him a grappling blaster. While he does not need it himself due to his species impeccable climbing skill; it is always good to have one on hand incase on of his teammates needs a lift. One thing he does keep is the brown cloak or robe that most Jedi are seen wearing over their clothes.

The hilts on all of Dar’rak’s sabers are covered in a special wood from a tree found on his home planet that naturally can resist and repel damage from saber blades as well as termites and other assorted threats. When extended each of his blades burn with a powerful deep green glow. Due to being incased in the wood, Dar’rak’s saber hilts are brown with gray pummels with a hint of green around the blade-emitter and along the switch.

​BIOGRAPHY:
Dar’rak is a typically calm individual up until the point he is forced to draw his light saber. Then a change comes over him that very few if any would see as Jedi like. Cold and savage is the best way to describe his battle style as the twin blades of his light saber hum to life. Once the need for his blade has ended Dar’rak quickly returns to a much more suitable demeanor. One who does not know him personally may not be able to tell of this change as Dar’rak’s reptilian features and voice do not portray anything on the kinder side of outward emotion. Even should something bring a smile or laugh to his toothy grin it would appear more of a snarl and growl.

Dar’rak started his life out as most members of his species do. Born to a member of a tribe, however his parents were not on their home world when he was born. Because of his species strength they were both slave workers. His mother did not want her son to be born a slave. She snuck him onto a freighter that was bound for the Jedi temple at the cost of her own life as her master killed her for conspiracy to escape.

When he was discovered he had little on his person other than a note from his mother, who died so that he could live. “To whoever finds this please take good care of my boy, his name is Dar’rak.” Dar’rak was recognized as a force sensitive by the Jedi who found him even if they yet did not know what species he was. They took him into the temple where he was to grow in the Jedi arts.

As a youngling Dar’rak took to single saber combat rather quickly. By the time Dar’rak was 10, few of the others were able to keep up with him or his adopted double bladed saber. Instead Dar’rak moved onto challenging his classmates to take him down in whatever manner they could muster, even if that meant ganging up on him. This proved an avid increase to the challenge he had, but only for a short time as it was soon the same story as before.

When Dar’rak was not training he spent his time climbing the walls of the temple with his clawed hands and feet, swimming for hours in whatever body of water he could find, and building a speeder bike of his own design. By the time Dar’rak was 12, he had built his speeder bike and won several speeder bike races much to the dislike of the temple.
Now 14, Dar’rak hopes to find a master who can advance his training beyond what he has learned here inside the temple...

Dar'rak does have a set of three custom Speeder bike he built from scratch and constructed with use of the force much in the same way a Jedi constructs their light saber. The bike is long in design to hold Dar’rak and his tail comfortably. The front is wide at the controls with the typical motor bike stile grips for directional control. The front end extends forward and slopes downward as it thins to an edge. The core of the bike is where Dar’rak straddles the seat and the repulsor lift engine that allows it to fly. There are pedals on either side of the bike that, with the hand controls, manipulate the bikes speed and directional movement. The rear consists of basic framework and storage compartments for any tools or supplies the rider may need. The bike is painted with green and a cardboard-brown. The Bike is actually powered by the rider’s use of the force and not standard systems.

Dar’rak typically takes his bike with him everywhere as a means of faster travel as well as trips to the speeder bike races that he partakes in as a pastime. Dar’rak can call on his bike with the force much like how Jedi can summon their dropped light sabers.

ROLE-PLAYS:
Enter the Dragon
The Underdark
The Fall of Hion the Herglic (Jedi Order)
Slave to the Grind [Dar'rak Training]
Crystal Caves [Dar'rak]
(Invasion) The Liberation of Ossus [Republic vs. Sith Empire]
"My Blade Burns with the will of the force!"