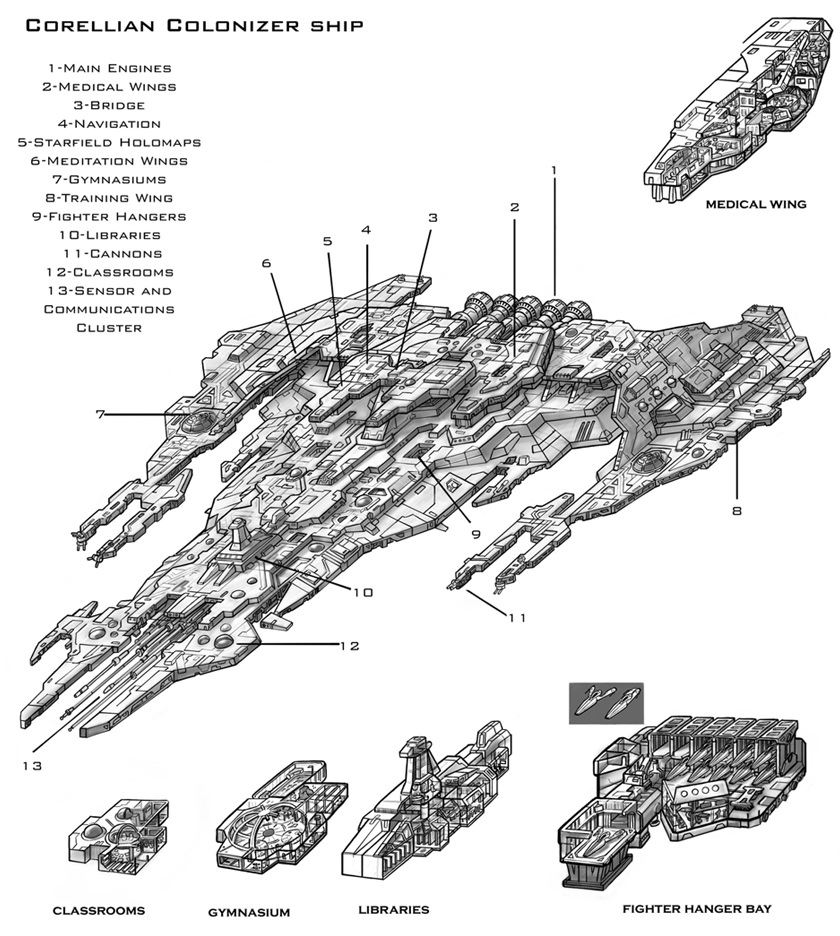 [*]
Hangar: 100 Docking Bays (NO STARFIGHTERS ON BOARD BY DEFAULT)

Since the Great Sith War and before, Corellians were famed for the colonies and colony ships. Several times the Jedi Order was known to depend on Corellian shipwrights as the makers of their Praxeum ships, and the CCS P1 is based on an ancient design from a long defunct manufacturing company called the ‘Corellian Colonizer’.

After modernization and refit, the first model was produced, customized, and sent as a gift to the Corellian Confederation and the Green Jedi, given theirs and CEC’s long standing relationship together. The other nine in a planned series of 10 are still being negotiated for, though Cal and his team have sent missives out to others to offer the design details.

This ship is designed to be a floating home amongst the stars, a sanctum of learning and growth and a place of security with which to mold the next generation of minds for the Jedi of all walks of the Force. And, to an extent, to hone and sharpen those minds already dedicated to the service of the Force.

Each Faction or Organization that purchases one of these is responsible for sending in a customized submission notating any deviations from standard (as CEC even in this line prides itself on such being possible), and a marketplace thread will track current units and who has possession of them as well as sales.

Character Bio
Please provide us with permissions or proof to use components listed within this submission that aren't "Open Market" or otherwise explicitly affiliated with this submission (such as the Mandalorian Escape pods).

A Tier III, the largest civilian ship that CEC could produce would be at 2000 meters per Table 2.0 in the Starship Template. I'd recommend reducing the size then to 2000 meters. Alternatively, you could find a different manufacturer for it or place it into archives until CEC is ready to manufacture a ship this large.

This shield's submission doesn't really address is being onboard a civilian ship, being explicitly designed for civilian space stations greater than 2000 meters, but specifically excluding warships and military space stations. I can see this shield being used on this ship, but its abilities on the Praxeum need to be explicitly listed given that this will have reduced power compared to it being installed on a civilian station (since a station doesn't have engines to worry about powering, etc).

Please move the Quad laser turrets and the point defense cannons to the armament section, as these devices are designed to destroy other ships (starfighters). With that, this cannot have an armament rating of "none" and yet be equipped with anti-ship weapons. Please adjust accordingly.

Character Bio
[member="Gir Quee"] - All edits done except as noted below.

I'm going to argue the shield thing. Sorry, but the sub for the shield doesn't say anything you are stating, nor does the civlian station template. The thing has zero weaponry, next to no defenses OTHER THAN the shield and fighters (which people summarily ignore anyway). What else are the quite insanely large reactors on this thing doing other than powering the shields? This *is* a civilian station. It's literally a copy-paste of the template with an upgrade in Speed & Handling by 1 category. If you'd like me to knock things back down to Very Low to be exactly like the template example the Factory provides, I am happy to.

Otherwise, there is clear evidence in the Factory of stations having engines(albeit very poor and cumbersome ones), and the submission used states 'generally > 2,000m', not that it must or has to be, and i'm right at the low end cut off anyhow. It seems overly neutering like to make it have no engines or a powering issue with the shield given there's nothing in the components, templates, or anything that says that's how it should go. I'm happy to discuss adding another weakness if you are insistent, but I'm pretty unwilling to budge on the shield not functioning as stated on the box or such.

Frankly, this thing is apt to get shredded in two posts in combat anyhow, so weakening it further might as well just not bother. I'm open for suggestions if balance is an issue, but if you're unwilling to come to terms on the shield, feel free to deny and I'll take my right to a second chance.

Per those subs, we need permission for those as well.


Cal Sedaire said:
I'm going to argue the shield thing. Sorry, but the sub for the shield doesn't say anything you are stating, nor does the civlian station template.
Click to expand...

Something not being explicitly listed does not mean that it's automatically okay to do. As a hyperbolic example, simply because someone does not explicitly mention that their turbolaser cannot be used as a handheld weapon does mean that someone can pick up and use it a handheld weapon. When submissions are not explicitly clear cut about things, we talk about them. There is no standing that is either explicit or implicit.


Cal Sedaire said:
The thing has zero weaponry, next to no defenses OTHER THAN the shield and fighters (which people summarily ignore anyway). What else are the quite insanely large reactors on this thing doing other than powering the shields? This *is* a civilian station. It's literally a copy-paste of the template with an upgrade inSpeed & Handling by 1 category. If you'd like me to knock things back down to Very Low to be exactly like the template example the Factory provides, I am happy to.
Click to expand...

This is labelled as a ship, not a civilian space station. If you want to make a Praxeum Space Station, you are more than welcome to do so. It will be in the concept of a predominantly immobile space station though, not a slow-moving starship.

If this is a civilian space station, per that template though, this cannot carry starfighters. With that said, if you do explicitly make this a relatively immobile space station (with "very low" speed and maneuverability), all concerns about this shield will drop.

Both of those show. I removed the shield. I have permission, but it's not worth holding up the submission to get reconfirmation of it OOC since the only IC bit I have is technically worded in such a way it appears only for a single ship for CEC.

I also made sure to note about starfighters (not sure why that was mentioned, there are none in the sub and never have been) and emphasized the classification as a Civilian Station. Though I would suggest if a civ station HAS to have a certain rating, you state that in the template and cookie cutters as a requirement?

That should cover your concerns.

Character Bio
[member="Cal Sedaire"], to me, we seem to have two related stumbling blocks:

1) Is this a ship or a space station?
2) Do we need to discuss how the Kar'ara'novor Multifunctional Defense EMplacement works on this submission, or do we simply say that we don't because this is a space station?

Let's briefly cover them one by one:

1) This looks like a starship to me in concept. As it is a starship concept, I will not judge this as a space station. This may not be the intent, but it looks like an attempt to game the system because we do judge civilian starships and space stations differently. They have different size limits, different company manufacturing requirements, and other miscellaneous tidbits that are different.

Basically, this goes into that classic saying of "If it looks like a duck, swims like a duck, and quacks like a duck, then it probably is a duck". To get this as a civilian station, it cannot be labelled or otherwise described as a "Praxeum Ship".

Now, this being a ship doesn't necessarily mean that this ship can't use the Kar'ara'novor simply because that submission doesn't address its use on a civilian ship, which brings us to the second point of discussion.

2) The Kar'ara'novor is a planetary shield generator. That's extremely powerful, and probably will merit a defense rating to extreme even if we don't give it the full power listed in the submission. Speaking of which, here is the extent of that power listed in that sub:

If linked to a command-ship-grade reactor, the shield is strong enough to deflect any bombardment.
Click to expand...

This sounds like invincibility to me. I'm not going to approve a ship with invincible shields. If you want to use this generator, that's fine, but we need to be pretty clear within this submission that it cannot get to the power level of invincibility or the ability to "deflect any bombardment". Does that make sense?


Cal Sedaire said:
I also made sure to note about starfighters (not sure why that was mentioned, there are none in the sub and never have been) and emphasized the classification as a Civilian Station.
Click to expand...

I was referring to an earlier post by you in this thread:

Cal Sedaire said:
The thing has zero weaponry, next to no defenses OTHER THAN the shield and fighters (which people summarily ignore anyway)
Click to expand...

That's a forewarning not to use this to carry large amounts of starfighters lest it be reported. The way you've listed the hangar is fine as is.


Cal Sedaire said:
Though I would suggest if a civ station HAS to have a certain rating, you state that in the template and cookie cutters as a requirement?
Click to expand...

There isn't a certain rating it HAS to have, just things that it cannot have, which explicitly mentions starfighter squadrons. From the civilian space station template:

Character Bio
..... What is the changes you need, further from these done, to approve this as a station?

To be blunt, I feel led in circles by this & would just like to know in short, concise terms what you want. I'm fine to change, just need to know.

Cal Sedaire said:
What is the changes you need, further from these done, to approve this as a station?
Click to expand...

As a station, it needs to be just that: a station.

1) Remove all references to this being a ship.

Character Bio
Archive until I have the time to deal with things.

Character Bio
Moved to Factory Archives - If you want to remove from the archives, please feel free to tag [member="Jamie Pyne"], [member="Zef Halo"] or [member="Lily Kuhn"].