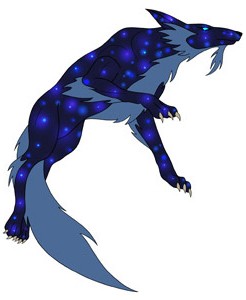 Strengths:Highly intelligent
Sharp claws and teeth
Agile
Able to guard themselves against force attacks when well trained
Weaknesses: Small size
Grows incredibly melancholy after death of its keeper
Curious to a fault
Mixed: Reveals a general dark and light moral compass of its bond-mate.
Beautiful pelt
Generally bonds with another organism

Distinctions: The Ashlan Wolf's pelt varies between green, blue, and red. However, the pelt does tend to change between darker shades of each color, becoming darker when a being is close to the dark side, and lighter when the being is close to the light. In rare cases, a white Ashlan wolf will happen if it is bonded with a person who is incredibly deep in the light side, as well as pure black if they are deep in the dark side. If neutrality is reached then the fur will show a very pure shade of the pelt's basic color. The basic fur colors will generally show the wolf's own temperament, green being rather mellow, red being aggressive, and blue being incredibly defensive of its bond-mate, and those associated with them. (Note, the Ashlan pelt only works if the wolf is alive)

Average Lifespan: The average lifespan of 300 years makes Ashlan Wolves a family pet that is often passed down generations.

Communication: Ashlan wolves use barks, whimpers and howls much like a dog, but they are capable of giving very general ideas and emotions through a basic telepathy, though such communication is only possible with their bond-mates.

Culture: Though barely qualifying as sentient, the culture of the Ashlan Wolves revolves around bonding with a creature at some point in their life. Due to the hostile environment of Myrkyr and the constant hunting of Vornskyrs, the wolves will generally choose to stay by an Ysalimiri, but if one is bonded to a sentient being, they will become loyal companions who will not leave their master’s side. This loyalty makes them excellent watchdogs despite their small size.

Technology level: Ashlan Wolves are incapable of most technology, but can be trained in basic tool use.

General behavior: The temperament of Ashlan Wolves varies (it can often but not always be judged by their basic fur colors), but they will eventually seek out a bond without fail. Once bonded, they will learn from, protect, and help their chosen ones.
History: Ashlan Wolves have no recorded history as they stayed hidden on Myrkyr, occasionally sold for very high prices to the select few who learned of their discovery. They remained a secretive species until a private expedition uncovered them and their strange fur.

Intent: To provide a companion creature for PCs, specifically, Vulpesen and Zarro Verres. Also it gives a addition to Myrkyr's strange wildlife anomalies, adding something which interprets the force to something which combats the force, and something that finds the force.

This is a rather fascinating concept to be honest. However, I’m curious how the whole bonding thing started out. After all, animals are neither light or dark sided, so their first encounter with such things would be only after visitors arrived from offworld.

Similarly I’m not happy whether we can have in essence a Force familiar. The wolf enhances its master’s Force power but can also use them as well.
I would like both those things removed as it is easy to abuse and I don’t think such a thing is possible in canon anyway.

This species is sentient, since that just means that it has emotions and in conscious of its surroundings (unlike a tree for instance). However it’s also pretty intelligent. I think some of the special perks of the species need to be trimmed down. Ysalimari and Vornskyr are a good model. They each have a pretty strong ‘perk’, but not too many.
I think the bonding, the colour changing and the basic telepathy are strong enough abilities combined to make this useful but not overpowered.

Let me know your thoughts.

Character Bio
I enjoyed the thought of the force familiar, and though I tried to tone it down, I am willing to be rid of it. As for the bonding, they usually bonded with ysalimiri, causing something of a symbiotic relationship which they used as a cloaking device against the vornskyrs. Once other people found them, they decided to try out the new people and bond with them instead.

My back up due to their greatest perk (being the obvious force sensitivity) would be putting their moral compass readings to a point where they could be trained to read that of others, though a character would only do that if he had reason to suspect, and of course they could be fooled by highly trained specialist.

If that is still too much, then I'll understand and leave them as they currently are, minus the force powers of course.

(Post Edit, Edit: @[member="Tegaea Alcori"] I believe I've finished. Feel free to alert me of anything I missed or of anything else that needs changing... wait, that's your job.)

Even though Star Wars is remarkably black and white, I don’t know how easy it is to tell a creature’s alignment. This isn’t D&D where such things are common, and it’s usually a lot more nuanced.

I would stick it so that only those they are bonded with can be so tested.

I’d prefer if the Force familiar thing went out, just because of the potential for trouble.

Rest of it is looking pretty good.

Character Bio
Changed the Red, Blue, and Green to reflect the wolf. As for the force and the detection, gone and singled out to bond-mate. @[member="Tegaea Alcori"] I think I got everything.