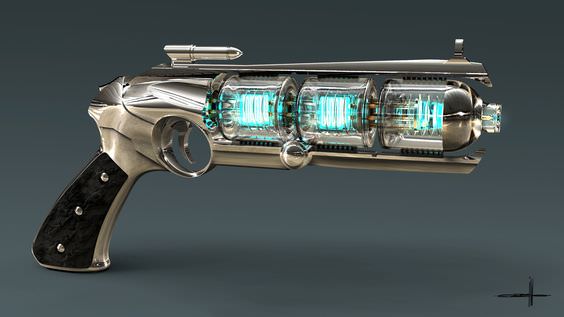 Shaped Energy: Using a design based on Baragwin technology, this pistol incorporates a shaped-energy delivery system that lends each shot a degree of concussive force.

Dallorian Alloy Plating: This specialised plating helps safely manage the heat generated by the higher settings. Also great if you like your weapons to truly shine.
​
STRENGTHS

Standard Setting: As it says on the complimentary packaging material, the Arc Light is an ionic concussion blaster. Its pretty effective against standard droids and can be used to temporarily stun them. The concussive energy delivered on this setting can be likened to that of a punch.

Medium Setting: Medium setting is where this pistol begins to stand out from the crowd. At this setting, the blaster is now capable of deactivating your standard droid without too much trouble, usually requiring a manual reboot to restore it to function.

Additionally, standard organic targets can be temporarily stunned / rendered unconscious for approximately 10-30 minutes depending on their tolerance. Any cybernetics, assuming they’re not insulated, may possibly be deactivated temporarily as well.

The concussive energy at this level should be enough to knock a sentient down. Armored sentients may feel winded.

High Setting: At the weapon’s highest setting, the pistol is now capable of disabling even heavily armored battle droids. Droids less insulated/protected will potentially have their motivators fried and their memory banks erased at this level of intensity.

In addition to stunning organics as in the previous setting, the extra charge delivered from the pistol is enough to cause temporary numbness and difficulty with fine motor control for several hours after regaining consciousness. Those unlucky enough to have cybernetics may experience further complications, including nerve damage and, in rare cases, death.

This setting has also shown effectiveness at temporarily disabling security doors as well.​
Concussive Energy should be enough to knock most near-human sentients off their feet and back a few paces.
​
WEAKNESSES


Effectiveness: Unsurprisingly, this blaster is most effective when utilized against your standard, run-of-the-mill droids and unarmored near-humans. This effect diminishes versus targets that are insulated, hardened or otherwise resistant to the effects of ion based attacks. The most obvious solution to this is to increase the power setting accordingly, however this can ultimately only mitigate the issue to a certain point.

Recoil: With the addition of the shaped-energy delivery system, this blaster has a much more prominent recoil that may catch those familiar with ion weapons unaware. When operating the Arc Light blaster, the use of two hands is recommended to help compensate for this.

Range: Like most pistols, the Arc Light simply shouldn’t be your port of call for distance shooting. At maximum range, it is only viable out to twenty meters. This is further reduced with each successive setting, lowering to twelve whilst on medium and only three when on high.

Ammo Capacity: Similarly, while capable of firing twenty times on the standard setting, each successive increase draws heavily upon the power cell. While on medium, it is capable of firing ten times in total. At the highest setting, the blaster is good for only five shots. Make them count, kid.​
​
DESCRIPTION


With Dallorian Alloy plating coming as standard with every model, you’d be forgiven for assuming that the Arc Light was nothing more an overly expensive ion blaster with a gaudy chrome job at first glance. Truthfully, that stylized rabbit logo emblazoned on the grip isn’t exactly lending it credibility, either. That said, beneath that obvious extravagant and arguably tasteless exterior, lies a weapon with a surprising amount of stopping power and flexibility for its comparative size.​
This is primarily thanks to the incorporation of a variable power setting, with the highest value making it more than capable of putting most droids and humanoid organics down without too much of a fuss. To further assist it in this endeavor, the blaster also draws inspiration from the weapons designed and pioneered by the often overlooked Baragwin, featuring shaped-energy delivery system to give it an added kick that very few will be expecting.​

Character Bio
[member="Dash Kessler"] Moved to Pre-Factory for edits per OP request. Please don't forget to include a summary of your changes. Thank you!