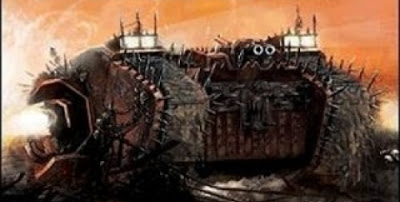 OUT OF CHARACTER INFORMATION
PRODUCTION INFORMATION
TECHNICAL SPECIFICATIONS
SPECIAL FEATURES
STRENGTHS
WEAKNESSES
DESCRIPTION
The Mawlers are the renown "Spiked Devils" of the Athysian war machine. Crewed by veteran, highly trained pilots and warriors, these beasts of war show the most savage side the Athysian Society has to offer, when they are deployed in the battlefield. Their wide black tracks fence the bulky large crimson-painted durasteel body of the assault tank, covered by the many barrels of armaments that peak over the thick armour.

It is customary for the Mawlers to decorate their vehicles with long sharp spikes built by black Durastee, Alchemically enhanced so it won't bend or break during battle. Onto those spikes, they hang chains and dismembered parts of bodies from captured enemies that they ritualistically bludgeon to pult on their own vehicles, delivering them as sacrifices to the Mawler Fiend to grant them power to either purge the foe, or die in glorious carnage. It is said, when a battle is won, it is tradition to perform such rites, with the red paint of the tanks to hardly differ by the blood offered, which is considered a sacriledge to clean off, afterwards.
Last edited: Sunday at 1:59 PM

As I see they are combined the "more DAKKA", the "WAAAGH" and the "Blood for the Blood God" phrase! Nice tank, enjoyed it!