A Ghost From the Past

Character Bio
Another collar, another planet, another crappy bar. Dax sat at the counter nursing yet another glass of Correllian Whiskey. For the first time in a long time, he wasn't there out of pity. He was there to just pass the time. He couldn't recall the last time he'd done that. He was waiting for the Azalea to finish being refueled, and while that happened, well, no reason to not get a good drink or two. 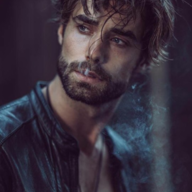 The empty void of space

Like a chasm torn into the earth, his mind had a exceedingly large hole in it. No reconciliation of anything other than thunderstorms and the terrors of war. A pyramid, and...

There it was again. There and then gone. Fleeting from his grasp before he could snatch it. Becoming increasingly pissed off, he paced around the deck of the small ship he found himself on, as The Heaven's Bane was out of contact. "God...damn it!" Yelling in frustration, he slumped into the pilots seat, chin in hand as he struggled to maintain a positive train of thought.

Staring out the veiwport, something shiny reflected off the glass and he swivled round, not noticing the gold metal before. Rising to his feet, he approached his cloak across the corridor, pulling a golden mask from underneath. Covered in dents and residue, he turned it in the light, the visor glaring back at him.

Finally, something clicked, and one word was quickly formed on his lips.

"Marshall?" came Halzyn's voice through the communicator, "Ship's all fueled up, we're ready to head home whenever you are."
"I'm on my way Hal, start calling anyone who's still out back to the ship. Don't want them to miss their flight, ya know."
"Copy that, sir."

With that, Dax knocked back the remainder of his drink, the liquid burning as it slid down his throat, before he placed a few credits on the counter. The Rogue stood and made his way out of the bar, quite ready to head home and take a day off or two. Hell, the crew earned it too.

A light drizzle had settled over the city as the Rogue walked, the quite patter of droplets striking the ground filled the air as the Rogue walked, back to the spaceport. Through the sounds, Dax thought he heard a distant voice call his name. The Rogue looked over his shoulder to see if he'd heard right...but nothing was there.

Character Bio
After hurtling through space his small ship sped through the planet's atmosphere at dangerous speeds, the golden mask beside him. Looking down at the gray, puddle filled earth, his eyes landed on a sleek black shuttle, and something told him that was his target.

Landing not too softly, he jumped from his seat, his body rigid, his black cloak swirling around him. Marching down the boarding ramp, the rain splattered against the gold surface of his mask, firmly back in its rightful spot. His combat boots made virtually no sound even as he strode bitterly towards the man. Reaching out, he grabbed his younger friend by the shoulder, spinning him around. Simultaneously, his weight was shifted to his back leg as he drew his fist back, before throwing his shoulder and weight back forward into his punch, aimed right for his friends nose as thunder exploded above.

Character Bio
A quiet crack echoed in Dax's head as the unknown man's fist collided with Dax's face, tears suddenly welling in in his eyes, blooding rushing out of his nostrils. The Rogue stumbled a couple feet backwards before landing flat on his back. Quickly scrambling to his feet and wiping the tears from his eyes, the Rogue was already reaching for his pistol before he recognized the golden mask, and the man behind it, "Nate?...Alright, I'll admit I deserved that..." he said as he pressed the back of his hand to his nose, attempting to stop the bleeding, unsuccessfully.

Character Bio
Already back upon the man he grabbed him by his collar, his fist drawn back again as his unsavory emotions mixed to make a already fuming man livid. No restraint. No regrets. Nothing was stopping him, even the fact that this was his long time friend, anger only fueled him on more.

"You left me." Through the mask his voice was metallic, hurt, and full of rage. "Alone. Forgotten. Like a dog you threw out!"

Character Bio
"Left you?!" the Rogue growled back as he grabbed Nate's hand, twisting his hand and arm into an arm lock, "You disappeared! Feth if I knew where you went, and I sure as hell couldn't find you!" the Rogue pushed the larger man away from him, "I tried to find you, damn it!"

And Dax had tried to find his friend. For months, guilt having wracked his mind. But eventually, he had to give up the search. Eventually he had to come back to the rest of the galaxy, get on with his life, protect the Coalition. Despite all his efforts, Nate had simply...disappeared.

Character Bio
Growling, he took a step back , his lightsaber freed from the confines of his cloak, willed into his open palm, the violet blade screaming to life. He didn't believe his friend as rage blinded him to see even the purest truth. "Liar!"

Springing into action, he swung his saber in a savage arc of violet death towards is friend, immediately taking the offensive. Yet, in his mind he had a feeling of nostalgia, deja-vu. As a memory slowly formed in the back of his head, to two locked in an epic struggle, Waring nations slaughtering below.

Character Bio
"Aw feth..." Dax's sabers flew into his hand as he bounded backwards, the blades suddenly screaming and howling to life as the Rogue was shrouded in orange and yellow glows. "Nate, I really don't wanna fight you, buddy." the Rogue said.

In Dax's mind he was cycling through his options. He would like to avoid a real fight with the man. But at this point, he wasn't sure. Finally he settled on an idea, a little risky considering how new the Rogue was to the technique, but it might be his only option at this point...well, he'd just have to see what happened.

Character Bio
Staying silent, their sabers clashed, the larger man having no intentions of letting up. Not until he knew the truth, or at least till he remembers. Pushing the other back he stepped forward again, raining down blow blow after blow, his anger fueling his attacks.

Character Bio
Dax moved quickly, either dodging the blows, or parrying them to the side. The Rogue knew he wouldn't win in a test of strength against the larger man. Speed and agility though? There he had a chance. Dax swept low spinning as he did so, trying to put some space between himself and [member="Nate Phantoms"]. As the Rogue came back up, he swept his blade upwards, and jumped, flipping through the air until he felt solid ground beneath him. This would be his best chance of incapacitating his friend and Dax had no intention of the opportunity slip through his fingers.

Dax focused all of his mental strength on Nate's mind, a flood of neural signals meant to course through mostly Nate's brain, but Dax was certainly feeling it as well. If this Neural Storm worked, Nate would be unconscious, and Dax could walkaway with little more than a headache...

Character Bio
Faltering, he stepped forward, thunder crackling over head, but only to feel a white hot pain in his head. Crippling as it was excruciating, he stumbled, fighting with all of his will. Growling, he rose on shaky legs, his weight not being supported.

Character Bio
Dax could feel Nate resisting, but Dax wasn't about to let his friend come out on top this time. Dax put in all the focus he could into his mental onslaught, willing himself through the mounting pain that he was experiencing. If Dax's head hurt this much, he couldn't imagine the pain that was going on in Nate's brain.

Character Bio
Collapsing under the mental strain, his saber clattered against the earth, deactivating. "Get....out." supporting himself up on a arm, he struggled to remain consciences.

Then it all went black.

Character Bio
Nate's saber clattered to the floor, soon followed by his body, and not soon after that, the sound of Dax falling to his knees panting. He pressed a hand to his head as he tried to suppress the searing pain in his head. It wasn't working.

The Rogue muttered several curses as he struggled to his feet and picked up Nate's saber, clipped it onto his own belt, and the hoisted Nate on to his shoulders. If Dax wasn't so tired, he'd make a comment about how Nate was getting a bit fat...

Nate would wake up in a cell, barrier field on between himself and the rest of the ship he was on. Nothing in there but a cot and toilet and no one around...

Character Bio
Waking up with a start, he reached for his weapons, only to find his belt empty. Jumping up, he pulled off his cloak and mask, his burning irisis boring into the wall on the other side of the barrier. Pounding a fist against the metal wall of his cell lightly he spoke out angrily.

"I want to see the captain."

Character Bio
"Ask..." Dax rounded the corner and stopped, facing Nate, "and ye shall receive..." Dax clasped his hands behind his back, as he gave the Demon a taught smile, "You ready to talk now or do I need to give us both another migraine?"

Character Bio
Standing against the barrier, his forearms sizzles from the continued contact with the energy, the initial zap fading away. Looking up, he scoffed, spitting out his toothpick.

"I want to know where've you been, where's my ship, and why the hell can't I remember anything?"

[member="Dax Fyre"]
You must log in or register to reply here.

Phantoms of the Past

Phantoms of the Past

Catching Up With The Past
2 3

Private When the Past Catches Up

Private The Past is Catching Up