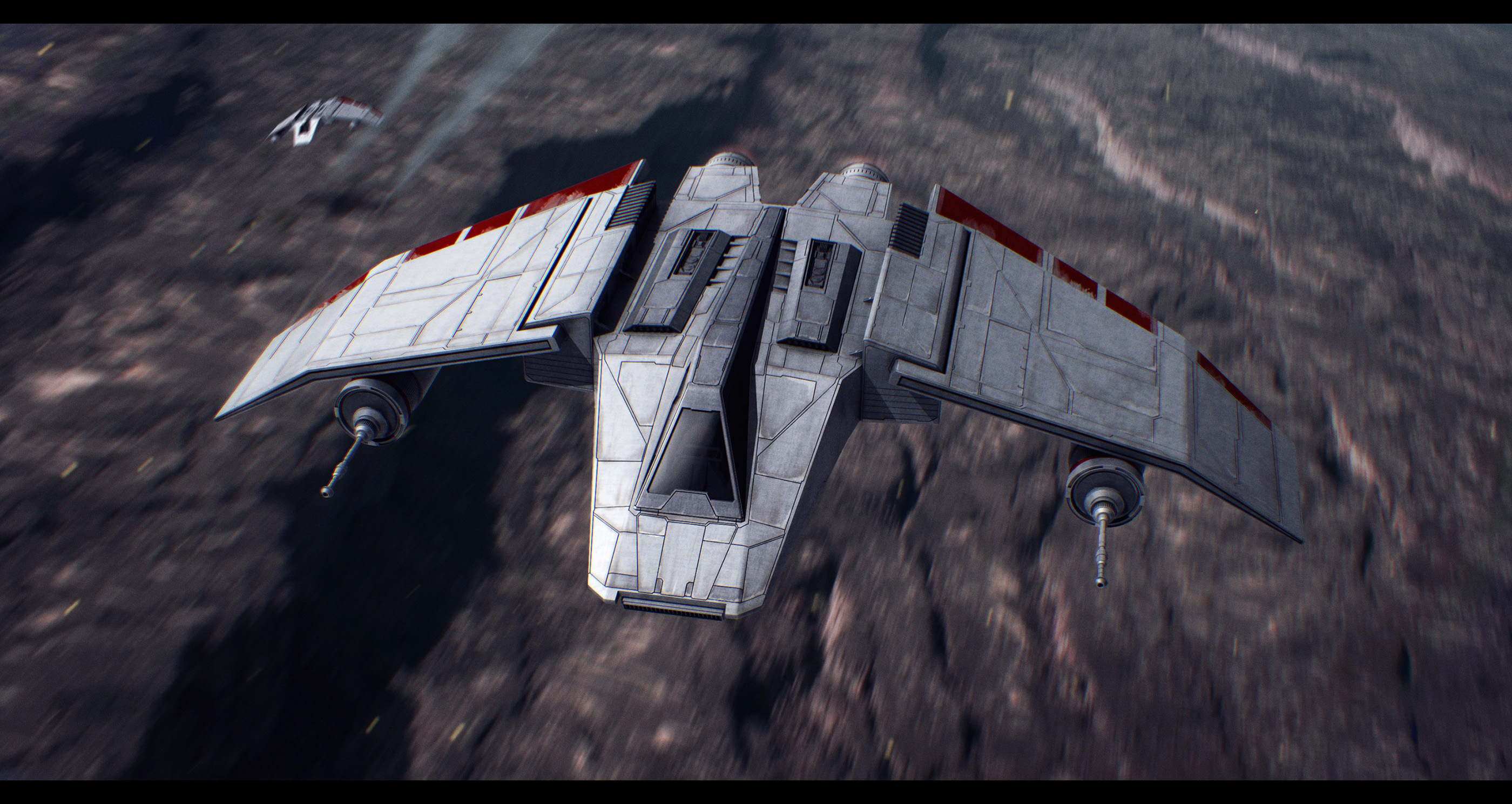 GENERAL INFORMATION
Unit Name: The Harpies. The official name is 46th Guards Strike Aviation Regiment. The unit is smaller than a regiment, but the Republican Guard likes to use expansive names not just because of general Tephriki culture but because it helps disguise their true numbers.
Affiliation: Republican Guard, Tephrike.
Classification: Pilots.
Description: A spectre haunts Tephrike - the spectre of freedom from Force-User tyranny. All the Force theocrats have entered into an unholy alliance to exorcise this spectre, lest it overthrow their tyranny. To be one of the Harpies is to live a life of revenge - against the Vaderites and the Dominion of Light for the atrocities they have committed. Justice for those the Harpies lost to the tyrannical aggressors and Force cultists. They derive their name from a local Tephriki wind spirit. It embodies storm winds. Like a raging storm, the Harpies swoop down on their foes to carry them off to final judgement. They are justice and terror, for each aspect is powerless without the other.

The Harpies are a group of pilots in the service of the Republican Guard, a revolutionary movement of partisans that has formed to free Tephrike's Non-Force-Users from the tyranny of Force-Users. In short, they claim to represent the ninety-nine point nine percent. One thing that distinguishes the Harpies is that all their pilots are female. Virtually every Harpy has lost a loved one to the enemies of the Guard, especially the Vaderites. In addition, the Harpies are overwhelmingly composed of aliens. Twi'leks are particularly prominent, as are Yuuzhan Vong to a lesser extent. One can also find Mon Calamari. These species have suffered greatly under the xenocidal regime of the human supremacist Vaderites. When not outright exterminated, they have been driven from their native lands to make room for human settlers, forced into cattle wagons and deported to slave labour camps and 'reservations'.

To justify their exploitation and mass murder of other species, the Vaderites claim that the Gulag Virus was the work of a conspiracy of xenos Jedi, in which Twi'leks featured prominently. Moreover, they have spread the absurd blood libel myth, which states that Twi'leks start out white, but change colour by drinking the blood and eating the meat of humans who have been ensnared by them. The more they eat, the redder they become. These asinine beliefs have been used to justify enslavement, mass killings and deportations. Quite a few Harpies are escaped forced labourers. Each Harpy swears an oath to protect the people, and make the tyrants pay. They have a particular animus towards the Vaderites and have been largely deployed against them. Knowing what fate awaits them if they fall into the hands of the enemy, the Harpies carry suicide pills to avoid capture.

The Harpies are pilots, but the Republican Guard is poor and a lot of of the technology at its disposal is quite primitive by galactic standards. They have only limited manufacturing capabilities in their underground and underwater bases, so they have to steal what they cannot make themselves. They are, however, masters of improvisation. Thus the Harpies take to the skies by piloting airspeeders such as the V-Wing. While ancient, these atmospheric aircraft have proved surprisingly effective. They have used them to protect settlements against Vaderite terror bombings and gone up against heavy armour. The Harpies excel at rapid strikes and hit-and-fade attacks. Sometimes they utilise specialised aicraft to insert teams of partisans behind enemy lines. They lack advanced tech, but have excellent coordination, training and dedication. Their heroism in shooting down Vaderite terror bombers has made them respected among the rebels.

The life of a Harpy may very well be short. Each loss is felt keenly by her sisters in arms. But it is their solemn vow to shield the people by bringing terror to the enemy. Until such a time when the Sacred War brings the forced of oppression to their knees. Then the tyrants will reap what they sowed. And the land stolen by the Vaderites will be reclaimed by those who were driven into the swamps and deserts to starve and die. Until such a time, there can be no peace with the invaders. The Harpies are, as a rule, not merciful to Vaderite pilots who manage to survive being shot down.

Zhudah Bava is a Yuuzhan Vong and the commander of the Harpies. She is a veteran who has been a soldier for over a decade. She originally trained to be a nurse, but then volunteered for the flying service after the Blitz decimated her family. The Tephriki Vong have been targeted for extermination by the Vaderites, who view them as abominations. This has made many of them staunch allies of the Republican Guard. Fighting the invaders is in the blood for her, for she is descended from survivors of the Vaderites' xenocidal policies. During an early raid, she was injured in the head by anti-aircraft artillery. Despite the nasty wound, she remained in control of her airspeeder and ensured the completion of the mission. She then evaded the flak.

She planned and personally led an aerial raid on a Vaderite death camp. The attack was costly and caused casualties among the prisoners. However, a number were able to take advantage of the chaos and escape. The operation was controversial in high command and considered a 'diversion', but she justified it with the argument that it briefly disrupted the flow of people to the killing sites. Strictly speaking, Zhudah is a member of the Shamed Ones, or the Extolled as they were known after the war. Necessity has compelled the Tephriki Vuuzhan Vong to care a lot less about caste, though some can still be snobbish about it. Zhulah is not a fan of the Republican Guard's present policy of focusing on the Dominion, and has been reprimanded for being quite vocal with her criticism.

Lakira Volanna is a female Twi'lek and prominent member of the Harpies. She was one of many Twi'leks who were forcibly evicted from their homeland, whose fertile black soil had been chosen for human colonisation. The human settlers were given latifundia, while the old inhabitants were loaded in cattle waggons run by the Imperial Railways. She and her family had to leave their homes at short notice at night time. She was allowed to take a few personal possessions. Indeed, the human settlers who occupied her home found half-eaten meals on the table and she had to leave most of her belongings behind.

Lakira lost most of her family on the trail of tears. Her husband was killed by a guard for being 'uppity', so was her sister's little girl because she was 'slowing them down'. However, Lakira escaped from the 'resettlement programme' and managed to join a resistance group that had fled into the wilderness. Lakira used to be a pilot for crop dusting, so she transferred her skills to this. She flies alongside Nauldra Kilnara, a Mon Calamari pilot who used to be part of the Dominion of Light. However, she was not a clone, but a frontier conscript pressed into service. Jedi tyranny and the poor treatment of her people motivated her to retreat to the Republican Guard.

COMBAT INFORMATION:
Unit Size: Small
Unit Availability: Rare
Unit Experience: Elite.
Equipment:
Armour:
Sidearms:
Misc:
Aircraft:
Combat Function: The Harpies are a group of pilots who fly airspeeders. Utilising these atmospheric aicraft, they provide close air support, fend off enemy terror bombers, conduct recon and, in some cases, help allied commandos insert behind enemy lines. The last task is fairly rare since the Guard prefers to deploy its partisans via submarines or underground tunnels, but can still occur. Partisans may use parachutes or anti-grav chutes when jumping from the speeders. The Harpies can patrol Republican Guard air space to provide advanced warning of incoming enemy forces and shoot down terror bombers. This is quite pertinent since their foes have no qualms about carpet bombing and using chemical weapons. The Harpies favour nightime operations and are very skilled at flying under adverse weather conditions.

The Republican Guard is poor, and lacks the means to get into space. However, the Harpies are resolute, well-trained and dedicated. They are also very vengeful. Thus the Harpies will generally operate in cooperation with other Republican Guard troops, though they can be deployed on their own. Each Harpy carries a suicide pill, which is to be used in the event of capture or torture. They know what gruesome fate awaits them if they fall into enemy hands.

The force is divided into squadrons. Not all of them are at full strength, and their tech is old, but they make do with skill, improvisation and ingenuity. Some members of the Harpies are Force-Dead, which means they cannot be sensed in the Force and are immune to most direct Force attacks. This is less pertinent during aerial combat than it would be on the ground, but is useful when Force-Sensitive enemy pilots say try to use illusions. Moreover, it means that enemies cannot use the Force to anticipate their actions in advance.

It is falsely claimed that TIE pilots who venture into the Black Morass disappear forever. Undoubtedly this is just idle talk soldiers indulge in after having one drink too many, when the Humanist Political Officer is not on the spot to gently remind them of their duty. There is no truth to the rumours of female, xenos harpies dragging brave human pilots to the Netherworld.

The Republican Guard - or more accurately the 'Xenos Guard', for it is composed solely of primitives and brainwashed humans who have shamed their species by partaking in sin - has no air force worth the name. No Humanist bomber pilot need fear them. Equally absurd is the idea that these 'furies' seek to avenge their dead loved ones. Xenos are incapable of love. Their only emotions are hatred and envy.

The Supreme Command Armed Forces of the Imperium - SCAFI - has vehemently dismissed these rumours as panic mongering. The Imperial aerospace forces are the finest in the world. Their greatest air marshal is none other than Darth Eisen, the Supreme Leader of this glorious nation and First Soldier of Mankind. Sadly, a few pilots had to be executed for spreading seditious rumours that undermined the defensive capabilities of the fatherland. Without exception, they were criminal individuals of low character.

One rumour concerns a rural town that was once called Nadara and populated by degenerate Twi'leks. Ever since its reclamation, the tailheads have been relocated to a more appropriate homeland and honest human folk have settled here. Now it is called Tarkinstad. The people are industrious, and the streets are clean and safe.

Supposedly an entire flight of TIE bombers was shot down near the village. The xenos conducted a bombing run and dropped terrorists, who wreaked havoc. It has been claimed the entire airfield was destroyed by the bandits. In truth, there was a regrettable accident at a fuel yard. This was clearly sabotage, but calm was restored by executing the indentured xenos assets at fault. The airfield is already up and running again, having been repaired in record time. The assumption that a few xenos females flying primitive airspeeders could cause such carnage is preposterous.

The Ministry of Propaganda advises every law-abiding citizens not to give any credence to these malicious rumours and report those who insist on undermining the human species' defensive capabilities. The sooner these seditionists can be identified, they can be put into the care of the authorities and cured of their deviant beliefs. Undermining the defence of the Imperium is a crime punished with execution. Praise Vader, praise Eisen.
Last edited: Jan 13, 2021 I love this unit! Approved.