So quite recently I have returned to watching anime as a regular feature of my entertainment, and yes if it hasn't been clear yet I am a huge fan of Japanese Animation - always have been really. But, that is for another time. One of my favorite genres of Anime is the Mecha genre - or robot/machines/vehicles genre. Many of its shows seem to amalgamate the things I enjoy most of about fiction works, i.e. science fiction, hard scifi, military technology, operatic war drama and space culture. So in light of all this I am doing a series of reviews of some of my personal favorite Mecha Shows. If you are well versed in the genre do feel free to make a comment and discuss - if you aren't I will do my best to introduce you, even entice you to give it a look. If you don't like anime - well as someone who likes Star Wars, I think mecha might be that rare genre were an interest could be bridged.

Ok, I'm going to level with you here reader - complete full disclosure - this piece of space fiction magnificence, is one of my most loved and probably (if forced to come up with one) my all time favorite piece of Japanese animation.​
Legend of Galactic Heroes (or LoGH), is a 110 episode series that takes the politics, cultural conflicts and philosophy from Tolstoy's War and Peace, the politiking, warfare and political drama of Romance of the Three Kingdoms and the explosive and gallant warfare of the Napoleonic age - throws it in space and then stretches it across the Perseus Arm of our Milky Way.​
It has a LARGE cast of characters, each of which get a full fleshed out background, character development that is spread out is various arcs and is given meaningful role to play in the larger story and the story of the more "main protagonists" - even minor characters appear fully fleshed out and given a specific view or perspective for the viewer to interpret the world the show is set in.​
SO WTF IS: LEGEND OF GALACTIC HEROES??

If ever there was a show that could be definitively described as a "Space Opera" it is LoGH. LoGH is a Space Opera in that it is designed to be like an Opera in Space. It has clear Acts, melodrama, conflict, climax and a resolution and epilogue. On another level it is also written just as a title implies - it is a Legend of the Galactic Heroes of an age of supreme galactic conflict.​
INTRODUCTION -​
At the very highest level - plot wise - the story revolves around the brief but heated rivalry and military careers of two Admirals (pictured above, I will get to their characters in much more detail later.)​
The golden haired visage of glorious space meat to the right is - Admiral Rienhard von Lohengramm of the Galactic Empire of Rudolf von Goldenbaum (yah you heard me - the Galactic Empire! But, it isn't what you'd think - I will explain later.) The Blue/Dark haired unseeming man to left is Admiral Yang Wen Li of the Free Planets Alliance. The careers of these two men, will shape the very fates of the Galactic Empire and Free Planets Alliance whom at the start of the series have been locked in a galactic war on and off for about 150 years in the 36th Century.​
Battles are waged in massive fleet battles that stretch across a tiny interstellar corridor which acts as the border between the two space powers called the Astarte Zone found within the Iserlohn Corridor. At the start of the series, we are introduced to the very last stages of the war and it begins with the 3rd Battle of Astarte.​
GALACTIC EMPIRE v. THE FREE PLANETS ALLIANCE - REINHARD v. YANG​
The Empire and the Free Planets Alliance are not as cut and dry opposites as one would believe, especially if they are coming from the Alliance - Empire dynamic of Star Wars.​
On the base of things they are very different. The Empire is a monarchical absolute monarchy with a heavy orientation around its founder's cultural heritage which is German. Hence why, as you will see, everyone in the Galactic Empire has a German Name, the Ships have a German Names and the Planets have Norse/Germanic names. It is homogeneous, oppressive and thoroughly corrupt. For more than 400 years the Empire has reigned over large parts of what used to be Galactic Federation. Its founder Rudolf von Goldenbaum, began his career as a politician/admiral in the Federation before becoming President, then President for Life before declaring himself Emperor - or Kaiser.​ 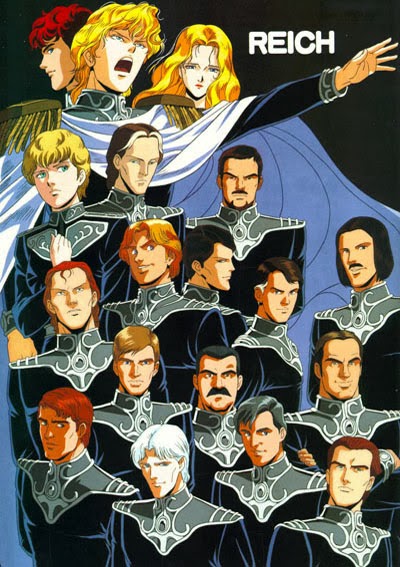 However, by the time of Reinhard's era, the Kaiser has become less and less of a powerful rule, the corrupt nobles wield most of the power and the Admiralty is bathed in nepotism and careerism. Which is why when a upstart but, lethally talented person like Reinhard shows up, one who is also of very low noble reputation coming from a line of penniless/landless nobles he is seen as an immediate threat. And through this, Reinhard gains victory after victory and he begins to gain a following of similar talented but, neglected admirals/captains who's careers are victims of elite noble nepotism.​
Reinhard is a one of those rare instances of a "benevolent tyrant" - he hates the nobility and wishes to enforce a new regime of meritocracy and centralized rule. However, he is also an ardent supporter of concentrated and imperial rule. Reinhard himself is based off of Alexander the Great- a military genius, empire builder, reformer and architect of profound change. But, a brutal warlord nonetheless. Finding democracy as chaotic, ineffective and broken - Reinhard believes the people deserve a just ruler but they themselves cannot rule. And this view comes from his confrontation with Nobles, who were practically once nobodies elevated to powerful status and as a result became corrupt and complacent. With this you meet the other Admirals in Reinhard's Admiralty who they themselves are spread across the spectrum.​
People like Wolfgang Mittermeyer, who is a gentle, kind man, who loves his family and his wife. Who follows Reinhard because he believes in the future he could bring about, and in general is a loyal man who'd prefer to war to be won and over with. On the other end are people like Paul von Oberstein who like Mittermeyer believes in Reinhard's dream, but he is a political schemer and a brutal tactician who has no qualms using dirty tricks to achieve a better future. He is the antithesis of Reinhard. One who believes to be benevolent and just some brutality must be tolerated.​
On the opposing side is the Free Planets Alliance, which was founded when a nobody ice miner by the name of Arle Heinessen, created a Exodus Fleet and fled the Empire with a fleet of people and after decades of searching found the planet Heinessen (named after him) and create the Free Planets Alliance which is more diverse and based off of Greek and French Republican Democratic heritage.​ 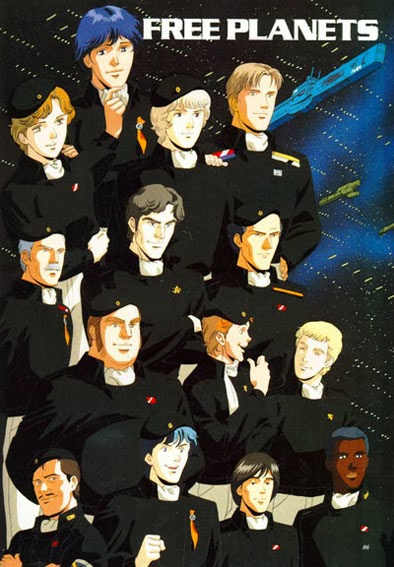 But, by Yang Wen Li's time, even it has decayed into a corrupt broken system. (Now stop me if this doesn't sound familiar in our current state of IRL news). The Alliance's government has degraded into a machine that perpetuates the "Patriotic War" against the Empire and enforces the war's popularity by persecuting and hounding those who question the continued bloodshed as "traitors", "Imperial Sympathizers" and "unpatriotic" fiends who discourage the morale and war effort. The War is propped up by the Minister of Defense who uses the war as a platform for his rise to Presidency. He also has a band of fascists who march around the streets beating up political opposition called the Patriotic Knights.​
Enter Yang, who originally just wanted to be a historian, but with his father's bankruptcy is forced to join the Navy so that he can get a History Scholarship. But, what he also has is a natural talent for warfare. In his first active service he organizes the safe evacuation of a planet and reluctantly is called a hero. His popularity grows in the navy and he is nicknamed "miracle yang". A title politicians for and against the war like to use in their game of political chess. Yang is caught in the middle of it.​
Yang, is a scholarly man. He has no machinations of conquest or change through war. He would rather be perfectly happy just reading and studying for the rest of his life. He is someone who supports democracy but, finds politics revolting. He has to reconcile with the fact that he must fight to protect democracy as a concept but, also would rather see the war come to its final and peaceful conclusion. And this is a struggle that he tries to confront many times. He is the type of commander who would rather retreat and save as many lives as he can while achieving a goal. Having served under irresponsible admirals who throw waves of men into the jaws of death for the goal of "patriotism" this style of his commanding is ingrained into his personality.​
This is what LoGH does. It takes a trope and reverses it asking you tough philosophical questions. Unlike Star Wars, who's Operatic style revolves around fate, good and evil and the destiny of family. LoGH is ambiguous in its presentation. There is now good or evil, only the spectrum and often contradictory nature of personal political and moral philosophy of humanity.​
It asks you as the watcher and the reader of this legend - A benevolent Empire or a corrupt Democracy? Which is just? Which is right? Or are they both victims of human nature. It even does the same with the main cast. Reinhard? Yang? Neither?​
I hope this little teaser into the world as increased your interest in trying the show out. In part two we get into the meat of things. Narrative, Music, Technology and the overall style of the shows story telling. ​
Stay Tuned.​