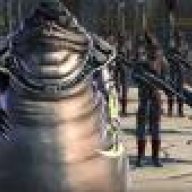 Intent: To create a personal walker for Zelgetha to keep him safe from most dangers , this will be earned through an adventure thread.
Image Source: https://orig00.deviantart.net/e08e/f/2016/088/e/3/mwo_king_crab_repaint_template_by_odanan-d9x0inh.png
Canon Link: N/A
Restricted Missions: none
Primary Source: none

+ Isotope 5 tech: The isotope 5 shield is designed to protect against any melee, or ranged attack coming from light to medium armored vehicles. Allowing for amazing durability in battle, however there are weapon systems that can with the proper concentration, penetrate the shield.

+Weaponry: The laser beams equipped are designed to take out infantry, barricades and light vehicles. With heavier vehicles and better defenses it would take several more shots before doing any damage.

+Hutt designed only: Due to how the personal walker was made by The
Old Hutt Empire, this prototype personal walker can only accommodate Hutt’s, its lavish room space for the user, allows comfortable resting.Those who are not Hutt's or scholars with the knowledge of their once ancient language cannot read or properly pilot the walker. This makes the vehicle extremely hard to steal as a result.

+Symbol: This vehicle represents a symbol of fear for Zelgetha’s Cartel.

Weaknesses:
-Yearly Maintenance: Servant’s or engineers need to give the vehicle yearly maintenance, making the vehicle a long term investment of money yearly.

-Slow: Like the Slug beings themselves, this walker is slow and can easily be outrun
-Always a bigger fish: bigger classed vehicles, and ships can slowly begin to overwhelm the powerful shield destroying the vehicle .
-The Force?: There are no anti force user measures.

-Overheating: Each blast coming from the laser beam need a five minute recharge before firing again.


(Provide, in list format, a minimum of 1 weaknesses of this submission.)

DESCRIPTION
While the origin of this prototype walker is known to be built at the height of Hutt power, little else is known of the Hutt Walker. This leaves much to wonder why, or how this cam to be designed and built. Such a threatening vehicle makes any academic wonder what future plans could have been enacted, had the Hutt’s continued rising the ladder of power. How much technological advances, and how far did some of the smarter clans achieve?

This designed walker fancies a powerful Isotope 5 shield which is a powerful defense. Higher concentrated laser beams also are it's compliment for weapons. Making it an imposing personal battle walker on the field, requiring only one pilot. However, due to many advances in todays age in space warfare and ground warfare. In its hay day it would have been nearly invincible to destroy. However, the Prototype Hutt walker is more of a titan in todays battle field, being a huge singular threat , that can be countered if multiple forces focus down the walker.

While powerful, and menacing, Zelgetha only uses this walker as a last resort, relying on his many thugs before ever using this in battle. This walker is one of his greater prides, the slug personally naming it “Zelgetha’s Wrath” , such a contraption is a symbol of his cartel and rising might in the galaxy.Should this ever be stolen, or should the walker be destroyed while he is operating , the syndicate would crumble in influence and power. The process of earning such a weapon proved very costly and tedious, but was the first major success of Zelgetha The Hutt. In return , the cyborg earned a weapon that could easily be used by it’s leader to enforce will, and a symbol of fear against the greedy crime lord’s enemies. Due to it age, it requires yearly maintenance, from the red eyed being’s servants to continue running. With the resources and power at the Hutt’s disposal, such a task could easily be done, with his many slaves, and servants.


Zelgetha The Hutt said:
Canon Link: (Please link the canon link if applicable canon item.) What does this mean ?
Click to expand...

If the submission was a canon item, such as "Obi-wan's lightsaber," or "Padme's Nubian Starskiff" you would link the Wikipedia article to that item. However this is an original submission, so just mark that field with "N/A"


Zelgetha The Hutt said:
Designed for Hutt’s only
Click to expand...

So only a Hutt can pilot this vehicle? What stops another species from hopping in and taking control? Other than maybe it being uncomfortable.

Edited, due to this vehicle being made by the Ancient Hutt Empire, the vehicle would be in an an ancient dialect that only hardcore Hutt's like Zelgetha would know. Thus being a deterrent for others , besides Hutt's and scholar's. I can add this into the description if necessary.

Character Bio
[member="Adron Malvern"] I have added it in the description.

Zelgetha The Hutt said:
Isotope 5 tech:The isotope 5 shield is designed to protect against any melee, or ranged attack coming from light to medium armored vehicles. Allowing for amazing durability in battle, however there are weapon systems that can with the proper concentration, penetrate the shield. This tech also fancies, beam projectors that can devastate large groups of infantry or average armor with the beam concentration.
Click to expand...

Isotope 5 Weaponry is above an "Average" rating. You'll have to ditch the isotope 5 lasers or tone down the defenses and add another weakness.

IS this better? Thanking you for helping me out .