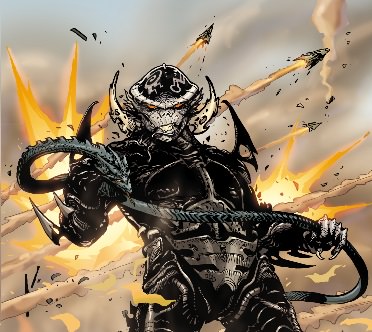 
BIOGRAPHY:
Born to the Domain Atona to a family of Warriors where he was raised to be a member of the higher order of the Domain. However he fought all those who stood in his way and proceeded to work his way to be the Commander of his planets Domain.

The Domain Atona were a small family of Vongs who settled in the Unknown Region of Crakull. They were a late arrival to the Galaxy then the rest of the attack fleets during the Yuuzhan Vong War. As such they were cast aside by history and were considered a side note in the waves of time. Staying secluded to their planet and only worked as slavers for the larger Domains. The Family of Atona survived all the hardships that naturally made them stronger.

After achieving the title of Domain Commander, he proceeded to learn the history of his people as he turned his family into a nomadic pirates wondering the space lanes to take what they could use and sell what they did not. This proceeded to happen for some time, until Zeir decided to start war with two other Domains of equal power in the Unknown Region and a small conflict arose in one of the Uncharted Nebula's near the Chiss Space. At the end of it all he defeated the two other tribes and brought them into his ranks. With a larger force, he took on the title of Supreme Commander and continued to be a Nomadic Domain.

Wondering from one world to another in the Unknown Region raiding, trading and shaping. The Domain of Atona became one of a unique style as it held member of four different caste. The Warriors, Shapers, Laborers, and Intendant Castes, all were welcome within the Domain and continued on the way of the Great Exodus. When more joined his Domain and coupled with family members, the Shapers were not able to keep up with the breeding of ships for their great Exodus. Zeir made a singular dissension that changed his Domain from the rest.

He abandoned the teachings of the the True Way, and abandoned the Great Doctrine in seeing it as holding his people from their continued growth. With his clan no longer being held by the strict doctrine of non-metallic use, and only reliance on biological growth, he leads his clan into an new era.


SHIP:
"The Great Exodus":
A world ship of his people after leaving the planet of origins, this ship hold no weapons and is more of a common center for the Domain to gather and create objects of ideas. It keeps the Domain from leaving the Home Fleet more then it need as it is self sufficient.

Reserved*
You must log in or register to reply here.