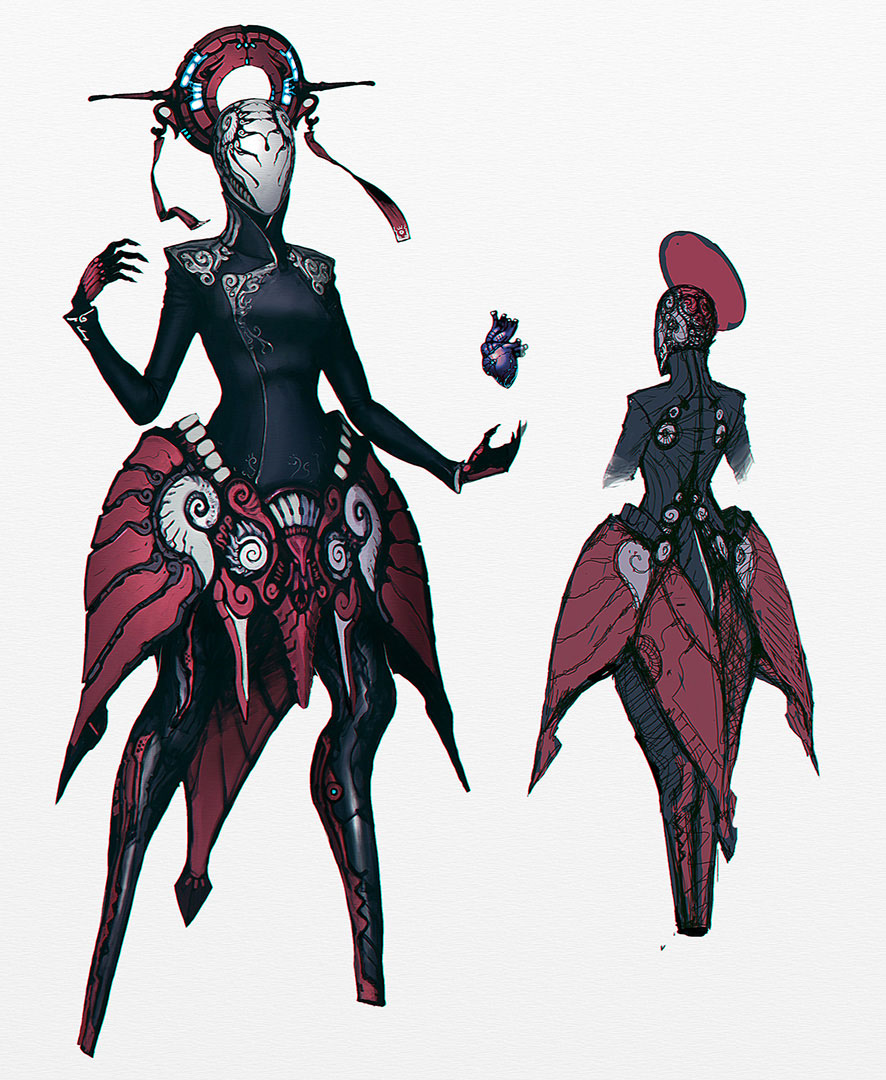 + BlasterMaster: Wit’twooo has an affinity for Blasters, rather than making use of Lightsabers considering her species’ disadvantage in it. She has a good, steady aim.

+ Telekinetic Specialty: As with most, if not all of her species, Wit’twooo has a particular strength in the telekinetic side of the force. Her pushes are powerful; her pulls are strong. She’s capable of lifting and throwing objects far heavier than others from lower-gravity planets.

-+Songful One: Wit’twooo is a Songful One, and has both the benefits and disadvantages that come with being one.

- Big Target: Wit’twooo is a big woman, no doubt about that. This makes it easier for others to strike or shoot at her, due to her size. Furthermore, she’s at a slight disadvantage in lightsaber combat due to the size of her legs, she can’t defend them as well as her upper body.

- Easily Winded: Wit’twooo requires a lot of nutrients to keep going, and she expends a lot of energy, which is mostly the reason for her slow walking speed.

Wit’twooo is a female Songful One of the Whuu race. She has a smooth, bald head with huge, black eyes that, upon closer inspection are actually of a very dark brown. She has no discernible nose. She doesn’t appear to have visible ears either. Rather than having a mouth, she has a horizontal slit with small holes where it should be. However, the hole is too small to eat anything or speak properly like all Songful Ones. When not in a hurry, she walks in a saunter, making heavy use of her hips to keep balance due to the lack of feet.

She’s rather tall, a little above-average for her species, towering over most humans at 2.3 meters or 7.5ft. She has a distinctly pear-shaped body, with her hips being wider than her shoulders. She doesn’t have hands; thus she requires prosthetic ones in order to use blasters or other items that require digits. Her arms are somewhat thin, almost delicate looking if she weren’t so tall, with narrow shoulders. Her body tightens down further with a thin waist. Her hips are, of course, much wider than her shoulders or waist, giving her a better centre of balance. Her thighs are strong, dense and abundant in volume. Her legs are much like a satyr or fawn in structure from the knees down, shins bending backward a bit and ending in feet without toes or ankles.

Clothing-wise, she seems to prefer skin-tight clothing with adornments over it. Generally, she wears a white helmet that covers the entirety of her head with markings that swirl over her temples and lines along her face and forehead. Above even that is a floating disc with antenna on either side that has two ribbons flow down to her shoulder area. Her helmet also doubles as a translation device, thus allowing her to communicate with others. She wears a one-piece suit that only stops at the very upper thigh/hip area. It too has swirls along the shoulders and chest area with a very long collar that crawls up to her jawline. The upper body piece is a jacket with magnetic lining so she can take it off when needed, but the strength ensures it is of her own volition. It has a long sleeve that hides her actual “hands”, only allowing her robotic ones to be seen. Down below, the garment digs into her general waist and hip area. On top of that however is a hip garment that covers the area, in the shape of some kind of flower. Finally, she appears to have thigh-high technological boots that her legs can fit into, since she breaks most robotic feet with her weight. They allow her to comfortably run.


Wit’twooo was born on the home planet of the Songful Ones. A group of Imperials from the Sith Empire had come seeking better soldiers. One of the few Sith that accompanied them noticed Wit’twooo’s force sensitivity. Of course, had they known that she was force-sensitive, they would have kept her, but there wasn’t one to actually find out whether she was, and so, they easily traded for her and a few others. While those who weren’t force-sensitive were sent off to a military academy, she was brought with the Sith who found her.

He then handed her off to another Sith, who enjoyed testing prospective acolytes for his own amusement, but he was a teacher first, and Wit’twooo had to learn at least the basics of Imperial rule. He put her in with another group after fitting her into proper clothing as well as placing a vocal translator around her head. She then spent a few years learning the Galactic Basic. One of the other prospective Acolytes by the name of Savius didn’t particularly take to her, most likely due to her alien heritage. She came to that conclusion as, after learning the Basic Common, she found most of the words he had been using to her were slurs.

She spoke with other Acolytes, some seemed to dislike her for the sole purpose of competition, others were standoffish, at least one or two were somewhat jovial. All of them bar one were unanimous for their dislike of Savius, who appeared to be a favourite for Dark Side corruption by hating everyone. Especially aliens. There were numerous people he’d call an alien, but she was probably the most… Exotic of the group. Not to mention the eldest. Him being the second eldest, that rustled his jimmies a bit. She often had to avoid terrible accidents that befell her way when he was around. Eventually, they were given their task, either they win and get sent to a good academy, or they lose and are tossed to some mediocre/bad one. Even better, the winners would gain equipment of their choice as another prize.

There were a few rules. Of the twenty students, there were three medallions, each one had a picture of a planet on them. Korriban. Dromand Kaas and Barbatos, whoever brought a medallion to him would be able to go to that particular academy. You weren’t allowed to kill your fellow prospective acolytes, and you weren’t to team up. It was essentially an item hunt in an area upon a desert planet. Wit’twooo went off toward one of the cliff areas, searching. Though she found a medallion near one of their edges, sadly it was on a familiar face.
“Finally. About time you made it, Alien. All those times you ignored me… Was it because you don’t have ears, baldie?” he said. His friend stood by his side, arms crossed and smirking.

“[Hello. I see you have found your medallion. You will be leaving for the academy.]” she spoke.

“Yes, yes I will, but not before I deal with some trash. Either you jump off of this cliff, or I kill you slowly. Don’t worry, you won’t be alone down there.”

“[I would like to decline both of these suggestions, thank you.]” she said. Looking around, she found that none of the others who were looking for medallions. It seemed she was alone against them.

“I’m not giving you a choice.” Savius growled ,before reaching to his belt and pulling out a device. She instantly recognised it as he brought his hands up. It was a lightsaber. He ignited it, red bathing the part of his face that it was adjacent to. “Slowly it is.”

Her heart dropped to her stomach. This wasn’t good. A single touch would scar, a swing maim. She began stepping backward, but though her legs were far stronger than his, her awkward backward gait couldn’t match his full-pelt run. He moved behind her. “I’d slice your hands off, but you don’t have any!” he shouted, swinging for her knees.

She closed her eyes and winced. Pain. She didn’t know what she was expecting, but it wasn’t as bad as she thought. She opened her eyes, looking down at him. His lightsaber was pressed against her body, but it wasn’t cutting. It just burned instead.

Savius looked down at his saber. “I… I wanted a REAL one, not a stupid… Training saber!” he grunted, hauling the device back to swing again, but she struck him lightly across the cheek. Her leg hurt, even if it wasn’t lethal, she didn’t want to be hit by that again. He crumbled, teeth flying due to her strength.

She looked down at the prone form of Savius. He had tried to kill her; so shouldn’t she get rid of the threat? She rose one of her legs up, and stepped on his head, crushing it like a grape. “[Sounds of disgust.]” the translator spoke for her. She turned it off. She wiped her foot in the ground. That was a bit messier than anticipated.

A strangled cry came from behind her. Oh yes! His friend.

“Killing an acolyte is against the rules! You’re going to die for this, you alien filth!” he screamed. She turned around.

“Swooo?” she whistled in confusion, tilting her head toward the other acolyte, before realising something. She turned her translator back on. “[Oh! That is correct. But I acted in self-defence, therefore, I am in the right.]” she spoke. The acolyte sneered at her.

“We’ll see about that!” he declared, taking one last look at his unrecognisable friend before turning tail to flee.

“[I am afraid we will not.]” Wit’twooo said, running forth and grabbing him into a bear hug. He flailed, letting out a surprised grunt before finding his jaw pushed shut. “[If I remove you, I will not have to deal with any fallout, correct?]” she asked, though she didn’t really expect nor want an answer, her grip on him was tight. She moved the acolyte over toward the edge of the cliff and tossed him over. She waved to him, before letting him go. “[Safe travels!]”

She watched as he screamed the whole way down. She looked at the dead man by her feet. She hooked her “hand” along his neck to nudge the medallion off, before poking him off the cliff as well.s That was that. She placed the medallion between her two “hands” and sauntered off back to her sponsor. She had won, it appeared she would end up in Barbatos Academy.
EQUIPMENT:

MS-1 Ms. Madam Droid: Unsurprisingly, Wit’twooo has trouble clothing or equipping herself, especially when she has her prosthetic hands off. Therefore, she makes use of housekeeping droid. It is a standard Ms Madam droid that has a shirt, trousers, shoes and tie, looking more like a waitress. It has no special configuration other than to attend to her needs when she requires her. Wit’twooo calls her Janet.

Clothes: Wit’twooo appears to have gone for an aesthetic look rather than a practical one for now. Other than the translator, her clothes give no other benefit. For now.