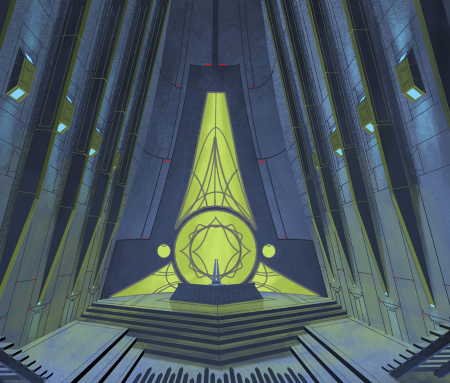 The day had been long and filled with many distractions, inconveniences, and abrupt interruptions. But now the Emperor of the Sith could rest his weary patience, his titanic body reclining back in the reinforced throne that sat behind his office desk. The office itself was empty, all of his bureaucratic peons had been dismissed and only the pair of guards lingering outside the door were what remained of the usual guard that accompanied his majesty every waking moment.

But not he finally had some time to himself.

On his desk were scattered various report datapads, parchment paper with Aurebesh writing and illustrated drawings, and several knick-knacks and trinkets that he often decorated his working space with. One such object was the gilded skull of Ronin Fel, a rival Emperor he had dispatched nearly twenty years ago. His body had been harvested for its genetic material, and his skull clad in ornate gold as a memento of his victory over the Fel Empire.

Now another Fel Empire was trying to rise somewhere in the Unknown Regions, or so his spies had informed him. That seemed to be a common occurrence these days, the sins of his past haunting him with progeny yet unslain. The Dorns, the Serens, and now the Fels.

It was quite ridiculous if you asked him.

Kaine gently picked up the skull, staring absently into the empty sockets as if trying to discern some hidden wisdom in those orbless holes. With a grunt of agitation, the Emperor tossed the skull back on the desk with a thud and resigned himself to staring blankly into nothingness.

Slender fingers coursed through waist length crimson curls, gently pulling apart the tangles before a soft brush followed. A soft strain of music filled the air, along with the heavy scent of Ithorian orchids. Pleasure pulled at her senses and she closed her eyes, pausing to simply savor the moment. Tentative steps intruded on her awareness, bidding the Empress to open her eyes and cast them towards her most loyal servant. The young woman bowed her head and approached upon being acknowledged.

"Asha, my dear...what have you for me?" the woman purred and reached out with one hand to touch the dusky cheek before turning her attention to the fine lacquered box she carried.

"A gift, m'lady, from your Lord husband." the soft voice offered, waiting with infinite patience as Invicta pulled upon the silken ribbon and lifted the top of the box. Resting within, on a bed of blood stained silk was a single, rusted key.

Invicta's lips curled into a smile that spoke of malevolent hunger, fingers withdrawing the key from its' vessel. "Thank you, Asha. That will be all, my darling. See to your lessons and make sure you eat something. You are still recovering and you need your strength."

The young woman smiled softly and bowed her head again, setting the box on the nearby table amidst the others before retreating to do as she was bid. The Empress waited until she had retreated to rise from her seat in front of the the sprawling vanity within her suite of rooms. The rusted key on the blood-stained silk meant that there was a prisoner in the dungeons, kept in a separate cell, awaiting her pleasure. The black lacquered box meant it was a traitor, to the family, to Panatha, or to the Empire...but given that they were on Bastion, she had her suspicions that it was a traitor to the Sith.

Stiletto heels clicked as she made her way through the cavernous halls of the Imperial Palace, acknowledging those she passed with a slight nod. Most stayed well out of her path, save for those few of her personal guard that formed a loose cordon around her. It was...entirely unnecessary, but something she allowed for the sake of propriety. They escorted her as far as the first dungeon level, waiting for her there as she went further inside, humming softly to herself. She sauntered slowly through the halls once more, steps carrying her to the throne room Kaine had taken as his office. A gesture dismissed her guard at the door, and Invicta stepped inside, letting it close softly behind her. She watched him from the shadow-filled entryway, silver eyes dark as the ebon threads of corruption within pulsed to the beat of the dying heart below in the dungeons. His agitation was palpable, and it added to the sweetness of the energy and blood she'd consumed mere moments before.

Skin flushed with the warmth of stolen life, Invicta stepped forward, fingers smoothing out the impeccable tailored ebon vinesilk gown that clung to her voluptuous form. Loose crimson curls shifted and moved behind her as if stirred by a breeze, falling down to her waist as she paused beside her husband's chair, perching gracefully on the padded arm.

"A kingdom for your thoughts, my darling...you look distressed." she purred softly, head canted to the side as she regarded him carefully.

Character Bio
His head turned slowly, regarding his beautiful wife with cruel and searing eyes, though they softened ever so slightly in her presence. Carnifex wore a specially tailored Imperial uniform, though his trademark maroon cloak was currently draped over the tall back of his throne, and his lightsaber sat inert on top of his desk. He turned fully now, taking two tentative steps towards Invicta as a coy smile split across his grizzled, handsome features.

"It is nothing, my treasure. Just the waning fatigue of a day of bureaucracy. Like the enemies of the Empire, it will pass into the sands of forgotten history."

Now he neared closer, standing at less than an arm's length from her as uncusped both hands from behind his back and let them hang idly at his sides. He simply stood there, taking in her beauty as the seconds passed mercifully slow, his breath well-maintained and slow as he drank in every ounce of her magnificence. Her dress was particularly provocative, its body-fitting nature showing the results of her multiple pregnancies. She had evolved from that lean predator into a voluptuous mother, though she retained her lethality even as her edges softened to tantalizing curves.

And then in a moment, he was on her, his large hands pulling her up into an embrace as his lips found hers. They parted for but a second, "Oh, but how I have yearned for your company, beloved."


[member="Invicta Zambrano"]​
You must log in or register to reply here.

Giving the Tiger her Fangs