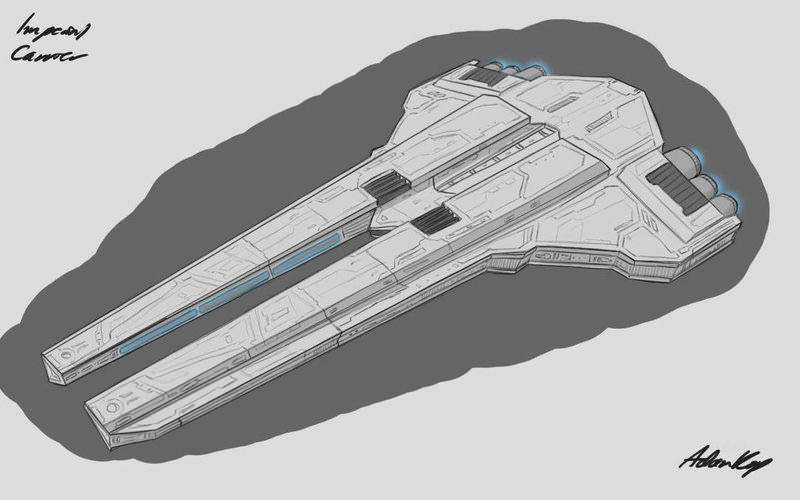 Sensor Jammer (x): The Vanguard is fitted with the 220 SIG Tactical Sensor Jamming system, a system which can hinder the enemy and their sensor ability.

M39 Comms Jammer (x): The Vanguard makes extensive use of the M39 Communications Jammer, to protect sensitive data transfers, and battle plans from unsavoury ears. It is however designed for ground use, meaning it can be somewhat troublesome to use in space.

Strengths:
Weaknesses:
Description: The Vanguard-Class Support Carrier is a natural evolution of the old Vindicator-Class, while retaining the same principles of warfare. The vanguard, ostensibly, is a rearguard vessel. Designed, not to face combat itself, but to provide a landing bay for fighters, to support offensive or defensive measures. The designers of the Vanguard-Class did not have direct combat in mind, ergo the limited defensive capabilities, and weaponry. Instead, the vessel was designed to act as a ground support platform.

A vessel, designated to sit in orbit, and perform garrison duty, or coordinate fighter support on more protracted military campaigns. The communications interception suite is key to this goal. The Vanguard houses an advanced communications decryption suite, its objective? Intercept communiques dispatched by enemy combatants, and decypher them. While this is mainly meant to be used in guerrilla warfare scenarios, it can be applied to active space combat. However, there of course is some delay with the decryption. But with some luck, the Vanguard can potentially crack enemy encryption and sift through their dirty laundry. Meaning that, despite it bringing nothing more than fighters, it may yet serve purpose.

In addition to the communications decryption, the vessel also employs jamming technologies able to potentially enforce a black out on communications, and sensors. The Vanguard can use these, to destroy and disable enemy synergy, and assist in offensives from the flank.

The Vanguard, is ultimately a support vessel. Reliant on its fighter, and subterfuge abilities in order to sustain viability in the field.

If you'll please move these point defence lasers to the armament section please.

At this time, the factory currently does not approve mass produced starship submissions with extreme ratings. For our two basic options forward then, we could do "Very High: 9 squadrons" at Mass-produced or keep it at Extreme: 10 squadrons and move production to minor.

Since hyperdrives do not count towards balancing except if they're faster than x1, you could raise this up to "average" or its numerical equivalent if you so wished.

If you'll add "potentially" or something equivalent to the first part of the second sentence ("it can potentially intercept..."). Communications is a broad field, and there remains possibilities of things that cannot be intercepted. The easiest example off the top of my head would communication lasers. Undoubtedly, the level of encryption, codes, and other security techniques also could play a role in this as well. As an example, this may be able to decrypt standard security encryptions, but how is its ability to translate an obscure ancient Gree dialect?

In general, it's best to describe how something works rather than state what the end results will be.


Robogeber said:
Sensor Jammer (x): The Vanguard is fitted with the 220 SIG Tactical Sensor Jamming system, a system which hinders the enemy and their sensor ability.
Click to expand...

If you'll add "can" right before the hinders part. Again, while this is will probably hinder most enemy sensors, there are also sensors that this may not effect, such as a simple zoom camera (or electro photo receptor, if you want to use the fancy Star Wars name for it).


Robogeber said:
But nonetheless, communications can, and will eventually be intercepted and decoded, allowing for intelligence to be gleaned.
Click to expand...

This elements needs to be edited to reflect the above discussion. Again, this is not a guaranteed effect.


Robogeber said:
In addition to the communications decryption, the vessel also employs jamming technologies to enforce a black out on communications, and sensors.
Click to expand...

Again, wording needs to be edited to reflect that is not a guaranteed effect.

The M39 is an interesting device, and wookieepedia's entry page doesn't do it justice. Here's part of its description from Gundark's Fantastic Technology p.89:

Originally designed as a device to prevent unauthorized listeners from tapping into sensitive comlink transmissions, the jammer pack was less than successful. The unit produced a muffled static effect every time it was activated, and made conversations harder to tap, but also harder for authorized listeners to understand. After a few million units were produced, the product was discontinued. Covert operations forces, Imperial Intelligence units in particular, recognized the signal jammer's potential: with a strong enough power source, the faulty unit could effectively drown out all comlink activity with high-gain static.
Click to expand...

Some things to take away from this:
1) It's designed for to block ground-use comlinks. The same technology isn't always necessarily used by starships (subspace transceivers, hypertransceivers, comm lasers, etc). This may not effect some communications devices. Please note that within the description itself.
2) This is reliant on a power source for the strength of its effect. This means that like most communication's jamming, there are multiple factors that play into its effectiveness: Location of the jammer, locations of the other communicating ships, and the strength of the communicating ship's comm systems. As an extreme example of this, a pair of SSDs sitting right next to each other won't be jammed by this carrier, especially if it's very far away from the two SSDs.
3) It has some difficulties in protecting information as well. Basically, its effectiveness at security is tied to in its inability to properly allow friendly forces to understand that information. Something to think about when this system is RPed.

Overall, this is currently one rating too high. If you do elect to move it to minor production or reduce the hangar rating to "Very High" though, it will be perfectly balanced.

Gir Quee said:
Overall, this is currently one rating too high. If you do elect to move it to minor production or reduce the hangar rating to "Very High" though, it will be perfectly balanced.
Click to expand...

I editted the submission as requested.