(Above is the "Jailer" race of the Umphathi. Source: Mass Effect 2, copyright: Bioware Inc.) 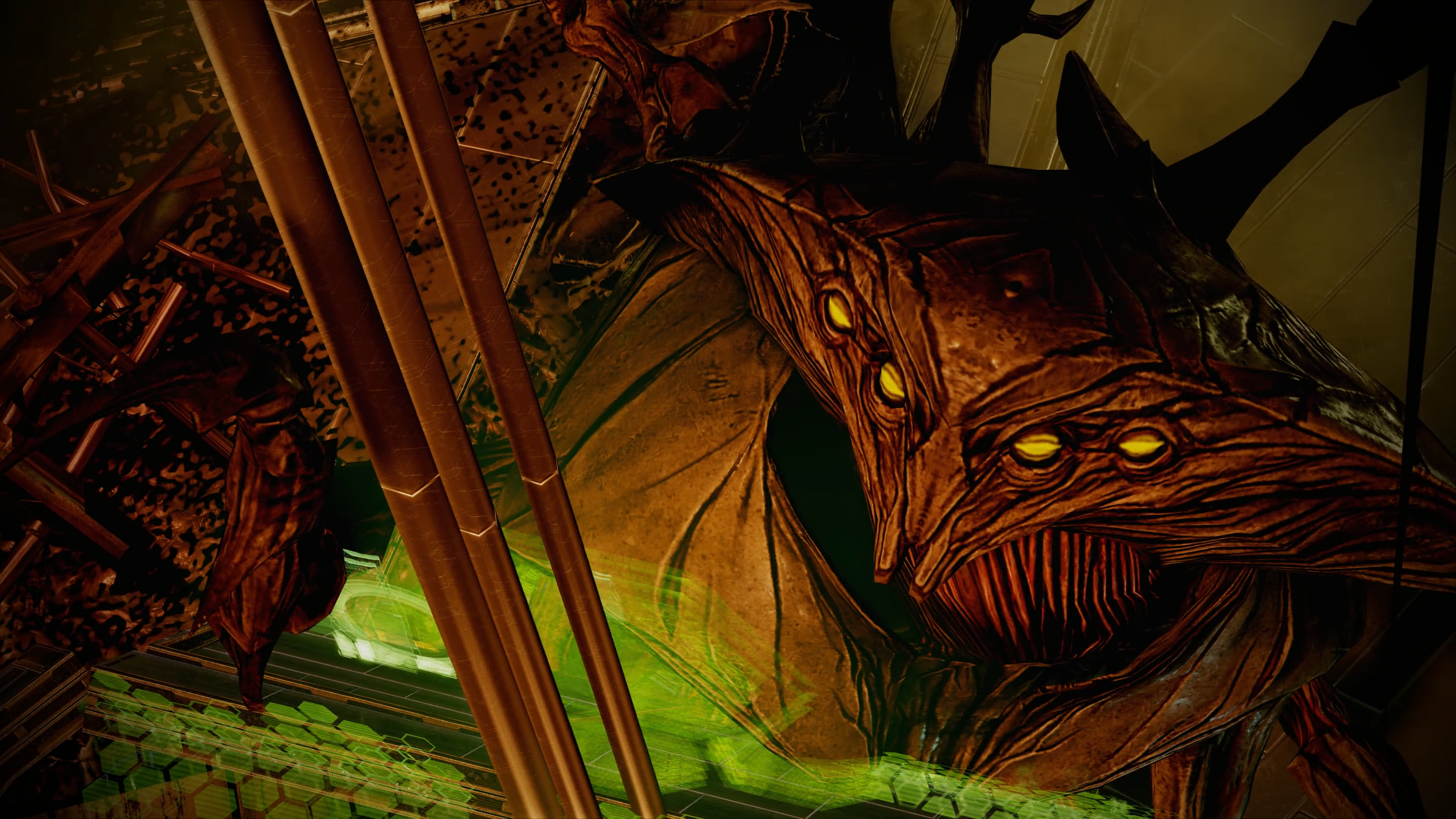 (Above is the "Paramount" race of the spcies. Source: Mass Effect 2, Copyright: Bioware Inc.)


Insectoid forms and four eyes. “Paramounts” are distinguished by their stocky bodies and larger heads. It should also be noted that “male” and “female” have no real meanings to the species as they are all asexual and able to fertilize insect like eggs within their own body and then lay them.


The culture of the Umphathi revolves around productiveness of the individual and contribution to the well being of the whole. Due to the nature of their planets radiation, the species has had to rely on scavenging and other trades to make due. Due to this way of life, it became second nature for each individual to give back to the whole species even if they did not take part in operations planned by the paramounts. Even when an individual decides to break off from the rest of the species, the individual will return on a scheduled basis to give the species something from his exploits.

The caste system of the species is quite simple and easy to understand. The top of the caste system are the Paramounts, a physically inferior race of the species that composite with increased force sensitivity and high brain functions that make them near super computers. The second, and last class, is what are referred to as “subjects” in the culture of the Umphathi, but have been nicknamed “Jailers” by the rest of the galactic community. The Paramounts are able to process thousands of telepathic connections at a single time, while the average Umpathi is only able to comprehend handfuls at a time. For this reason, Paramounts organize operations carried out by the species while the Jailers do the hands on work.

The majority of operations carried out by the Umphathi are based around scavenging, slaving, selling, piracy and their most famous endeavor, jailing. Individuals who go out to roam the galaxy alone tend to dive into mercenary work and bounty hunting but there is the occasional humanitarian or advisor. The species is not inherently violent or hostile by nature, but this stereotype has not seized do to their frequent choices of employment. It is hard for some to wrap their mind around the idea that the Umphathi do not care how collections and individuals choose to serve the species, only that they DO serve the species.

When receiving a name in the culture is based off of a few different factors. Were you born into a collection or to an individual who was wandering the galaxy? If an individual was born into a collection their “first name” would be Yol (translating as “near” but having the deeper meaning of “near those who matter”) if you were born outside of a collection your first name would be Yov (Translating as “far” but meaning “far from those who matter). Neither has a negative meaning. For the second portion of your name it is the name of the planet or system you are born in with the suffix Sho (Example: Being born on Coruscant would make your middle name Sho’Coruscant). Finally, your last name is given by those within your collection (or the nearest Umphathi) who will pick it based on your actions, appearance etc.

Example: I was born on Earth, far from the home planet, and I am a student and that is the most recognizable thing about me. So, my name would be Yov’ShoEarth’Student.


There is no record of the Umphathi before the darkness, or a solid description of their planet either. However, after the darkness had ended they became a decently well known species in the galaxy thanks to their exploits. According to the history given by the Umphathi, their planet was once inhabited by their less evolved ancestors and a human colony. Sometime during the darkness, a meteor shower littered the planet with radioactive metals and caused an apocalyptic event that ended all human life on the planet.

The Umphathi’s primitive ancestors survived under the ground of the planet in deeply dug hives and caverns (presumably feeding off each other and what vegetation survived). During this time, their bodies slowly evolving to deal with the constant doses of radiation that sank through the soil. As time passed and the last decades of the darkness approached, the modern Umphathi emerged from the underground. They found that their planet was a barren wasteland that was plagued by radioactive storms. While the species had not yet evolved past a caveman like state, they soon rediscovered the ruins of the human colonists. It took them many additional years to finally work out how to recreate and use the leftover technologies and develop a written language.

By the end of the darkness the species was dying out, due to the lack of edible foods. Technology had barely evolved past kinetic weaponry and there were only basic wheeled vehicles to speak of. This would all change when a group of human explorers discovered the planet and the species on it. The humans were greeted with extreme caution at first, but after showing the Umphathi their advanced technologies and helping them uncover their origins they were more than welcome. While it did take months of trial and error to establish a mode of communication with the species, they eventually got the hold of creating technology on par with the rest of the galaxy. After the initial work was done, the Umphathi quickly accelerated in their discovery of technology and began creating things that were considered advanced by most of galactic society.

Within the first few months of their space fairing days, the telepathic connection that the Umphathi shared allowed the insectoids to create a name for themselves quickly. Scavenging and merchant work were the first of the operations undertaken by the Umphathi, but piracy and mercenary work soon followed, yet the galaxy was still mildly ignorant of the species existence. That would all change when the creatures decided to begin creating a complex prison system in the heart of their cracked moon.

This prison was created as a way to gain the species vast wealth by taking the unwanted and most dangerous prisoners from the nations of the galaxy and sticking them inside for an annual fee. The Prison has four layers; the surface of the moon serves as the security checkpoint, defense station and general administrative complex. The second layer is below the crust of the surface and is a complex made to hold the least dangerous of the prisoners. These prisoners are allowed to move freely in secured sections of the complex and can have a variety of outside items. The third layer is the prison complex that contains criminals posted as “violent” or “dangerous”. This layer consists of holding cells for serial killers, ex military and inmates who are seen as likely to attempt escape. Finally, the last layer is in the core of the moon as is specifically designed to hold force-users.

The prison is where the Umphathi first began to get their name as being cruel and savage. The rules for the prison are harsh and there are no laws preventing the guards from savagely beating, torturing or maiming rowdy inmates. Riot control consists of multiple high-tech less-than-lethal systems, but this does not stop the Umphathi guards from using questionable tactics. Most nations tend to look the other way as many nations pay the Umphathi to hold prisoners they just don’t want to hold onto. Since the Umphathi have their own artificial agriculture, manned by the Layer 2 imamates, it is cheaper for most nations to pay an annual fee than it is to house the prisoners themselves.

Due to the nature of the prison and the multiple other installations installed around Umphathi space, most see the species as naturally cruel and abusive. This could not be farther from the truth, but stereotypes tend to block out the truth. It may also be the fact that failures to pay result in the expulsion of the criminal in question, which forces the nation to pick up their criminal or have him released back into the galaxy.

Interesting ideas here. I especially like your ideas for the names.

A couple of points.

@mention me when you're ready and made the needed changes.

The changes have been made and as far the eyes I never mentioned the number of eyes being the cause for the better sight, but the number of certain eye components. Saying it is in "slow motion" was the best word I could think of to describe the increased perception of certain events that this creature has (like an eagle). The reason for this evolution was because of the lack of food during certain periods of the Umphathi's timeline.

This looks much better.