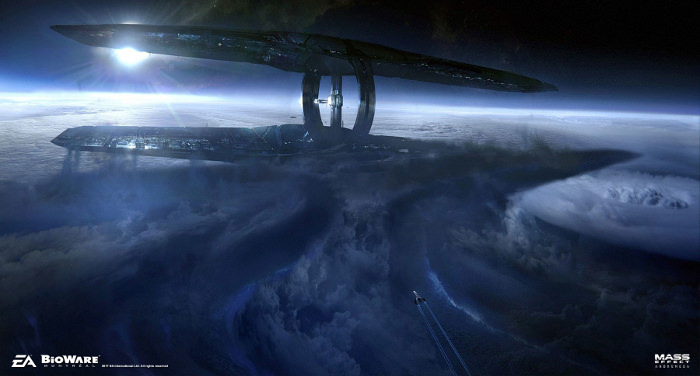 Molecular Shields: A special form of deflector technology, absorbing energy fire instead of deflecting or neutralizing it so that it may be converted into powering certain critical station systems. In addition to being more durable than standard capital grade shielding, this absorption process allows for the station to maintain reactor power under fire, making it very difficult launch an overwhelming strike that might cripple its shielding. A sustained barrage is the most effective method of attack, although the deflectors are more vulnerable to heavier hitting weaponry like HVCs, heavy turbolasers, and concussion missiles.

Hypermatter Reactor Network: Very similar to the Death Star's system, the Void Forge's hypermatter annihilator is fed by many stellar fuel bottles lining its outer rim. These pods can cause significant damage to the surrounding structure if struck in combat, but the system's more egregious design flaws have been corrected. A single volley of proton torpedoes would have minimal effect on the superstructure no matter where they were aimed.

Crystal Gravfield Trap: In addition to a comprehensive sensor suite, the station also uses synthetic crystal grids to detect and identity fluctuations in the local gravity field. This allows it to detect vessels employing the vast majority of cloak/stealth technology in orbit around Zhar. The gas giant's size and dense gravimetric baseline however means that the station's maximum detection range does not extend far outside orbit, or around to the planet's far side. With proper study of the Void Forge's orbital pattern, an undetected landing or take off on one of Zhar's moons is still possible.

Droid Repair Workshops: With its growing reputation as a kind of droid holy site and pilgrimage point, the Void Forge boasts some of the most high quality robotics repair and refurbishment facilities in the Outer Rim. Many artisan droidsmiths either call the station home or spend some time out of their year there. To the artificial population of the Zhar system, rather than a luxury service the station's facilities are seen as one of the premier droid 'hospitals' in the known galaxy, not only in terms of service quality but also care of treatment.

"Toll the Great Bell Once!​
Pull the Lever forward to engage the​
Piston and Pump...​
Toll the Great Bell Twice!​
With push of Button fire the Engine​
And spark Turbine into life...​
Toll the Great Bell Thrice!​
Sing Praise to the​
God of All Machines"​
- excerpt from the Catechism of the Autoculus​
​
Mechanicum means many things. Once a Void Kingdom of the Metal Lords, now it is part religious cult and part emergent industrial powerhouse within Confederate space. From their manufactory communes throughout the Zhar system and on Eos, fanatical enginseers and hierarchitects design and mass produce as a form of worship to their Machine God, providing goods to both their own people and other viceroyalties at exorbitant subsidies. A massive shipyard orbiting Zhar known as the Void Forge serves as the seat of their power.

Initially a much smaller repair facility when it was first constructed in orbit over Denon, the station was continuously expanded upon both with the assistance of resources first from the Free Worlds Coalition and then the Confederacy of Independent Systems until it reached its current proportions. Now orbiting the eponymous gas giant of the Zhar system, it broadcasts with a Confederate transponder as a symbol of unity between the system's long time denizens and its burgeoning FWC and Metal Lord refugee minority.

The vast majority of the structure's meterage is dedicated to industry, with the Mechanicum shipyards comprising the largest contiguous facility on the station by far. Dry docks and service hangars are honeycombed throughout the superstructure in complex patterns that would only seem rational to a droid in their layout. There is even a large scale droid foundry that takes up several sectors worth of space.

At the Void Forge's center are its main docking rings, which is where many of the station's public hangars and commercial transactions take place, as well as containing living facilities for those who call the station home. With an unusually high percentage of synthetic personnel, crew quarters are often shared en mass which allows for even more capacity and increased work productivity.

By far the largest sector within the station's commercial ring consists of the palatial administrative headquarters of the Mechanicum itself. Not officially seat of government for the system, Viceroy Calixis maintains an estate on Gall specifically for that purpose. It is however the nerve center of the region's de facto corporate superpower.

Not far from these headquarters there is a Temple reserved for universal worship, although it is primarily dedicated to the Great Maker and what the machine cult refers to as a Motive Force specifically for droidkind. Maintained and guarded by the loyalist Technomancer Order of Mechanus, the Great Machine Temple as it is commonly called is something of a phenomenon as center of a droid spiritualist movement.

During the fierce Void Kingdom civil war which drove the Metal Lords from Denon for a final time, there was a philosophical rift between the Chief Hierarchitect and a Master of the Technomancer Order which ultimately led to religious conflict. With Forge Denon lost to the heretikal teachings of this new Dark Mechanicum, the remaining Forges were ruthlessly purged of any whose loyalties to the Maker were in question. While the Void Forge was declared pure soon before their exodus from Coalition space, rumors persist of a Shadow Yard, a sector of the shipyard deleted from schematics and its crews memory which hold allegiance only to the Black Signal.